What are one or two examples of what you've done that has been successful in terms of promoting earth science literacy, developing the geoscience technical workforce (students entering the workforce following their associates degree), and/or preparing future geoscience majors?

Developing and improving Earth Science and science literacy is one of the key driving motivations of my in- and out-of-class activities. Recent surveys (Pew Center, 2009, National Science Board, 2010) suggest an unreasonably poor understanding of basic geosciences. For example, in the these surveys, 28% of the participants responded that the „sun goes around the earth‟, 31% said that humans and other living things have existed in their present form since the beginning of time, and about half (49%) said the earth is getting warmer "mostly because of human activity, such as burning fossil fuels". Low scientific literacy is just part of the overall poor background that my typical earth science students have when they come into my classroom.

To improve the scientific and earth science literacy of my students, Waubonsee faculty and staff, and the Waubonsee community, I have been coordinating and developing a program called „Asset Earth‟ since 2006. It consists of a series of two or three free lectures per semester on topics that are timely and controversial. The title „Asset Earth‟ allows us to present topics over a broad range of topics, from earth science & geology to biology, and meteorology that are selected to improve overall scientific literacy.

The lectures are hour-long presentations that are designed for a non-technical audience modeled after the weekly colloquia that most research universities have in their departments. The presentations are often followed by informal „meet-and-greet‟ sessions with the speaker, who will sign books they have authored or others that are provided in a display coordinated with the bookstore or student group, posters (if an IRIS presentation), or mingle while enjoying refreshments. There is no budget for speaker honoraria, so I have to cultivate local speakers or those whose expenses can be paid by their sponsoring agency. A presentation in 2006 by Dr Seth Stein, as an IRIS/SSA Distinguished Lecturer who spoke on Giant Earthquakes: Why, Where, When and What we can do, which was part of the grand opening ceremony for our new Science Building, became the unintended beginning of this program. Evaluations and comments made it clear that this was informative and entertaining event, and should be repeated. Following this moment of inspiration, we have since then had an additional IRIS/SSA Distinguished Lecturer, a series of presentations on global climate change, evolution (to coincide with Darwin‟s 200th birthday), astronomy (to coincide with the International Year of Astronomy) and sustainability. A list of presentations is provided in the table that follows this essay.

Critical to the success of this program has been the strong partnership with the Community Education Department at Waubonsee. They have provided endless logistical support for advertising and facility usage, and travel expenses for an exceptional speaker, Capt Jon McBride, USN Ret, Captain Space Shuttle Mission 41G. Working with the Community Education Department provides access to resources for promotion and logistics beyond the simple mailings, campus posters, and other motivational strategies provided by the Earth Science Department and Waubonsee faculty. Promotional materials are mailed to the entire Waubonsee community in the non-credit course schedules, as well as individualized letters to surrounding high schools, and 2 and 4 year Colleges and Universities with Earth Science or Geology faculty.

I would assess the success of this program in developing the scientific literacy of Waubonsee students, faculty, staff and community in several ways. From a student perspective, the „newspaper articles‟ that I ask my students to write as their extra credit for attending these events always include positive comments on their quality and informative nature. During the post-presentation „meet-and-greet‟ sessions, I usually have several members of the audience who are part of the Waubonsee community express their gratitude and interest in the event, and their desire for continuation of such events. A more tangible assessment is the continued attendance, which has been increasing from near 60 or 70 to over 100 per event.

As to preparing future geoscience majors, I have recently cultivated a student by displaying a poster I received as a GSA Campus Rep, and help her to reach her goal of becoming a volcanologist. She expressed interest in attending the 2009 GSA meeting in Portland based on seeing that poster, and I was also able to provide funding for her to attend the meeting because I gave a paper in the session Geoscience Programs at Community Colleges: Models for Success and Innovation, in which presenters were able to fund students through an NSF grant to the conveners of the session.. While at the conference, she was able to network with volcanologists and schools that will help significantly her in her future education. 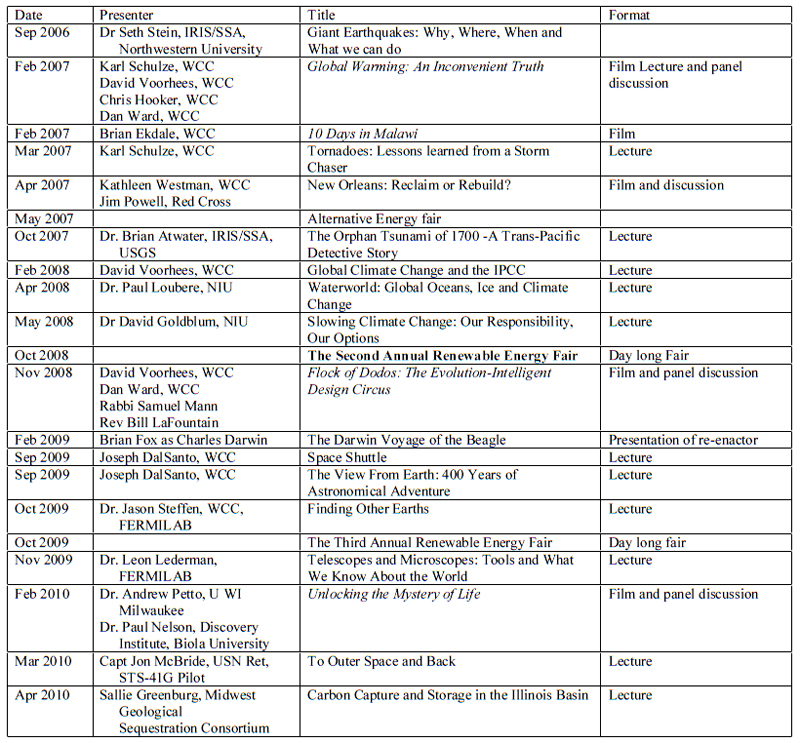