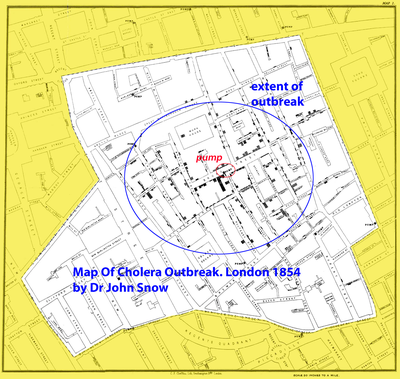 This map, by Dr John Snow, of the cholera outbreak in London in 1854, changed the science of epidemiology.

In August of 1854, the Soho district of London experienced a major cholera outbreak. In just three days, 127 people died. Within a month, several hundred more people died. At that time, it was unknown how diseases, such as cholera could be transmitted to people. Dr. John Snow, a physician, began to investigate the outbreak, looking for a probable means of transmission. He mapped the incidences of cholera and found that they clustered around a public water pump on Broad Street. His discovery convinced officials to remove the handle of the water pump. The pump was likely contaminated with fecal bacteria, since its well had not been properly dug out and was only a few feet away from an old cesspool used for sewage.

Dr. Snow's map of the cholera outbreak is a classic example of a map illuminating the answer to a complex problem. Can you think of other patterns that are more easily understood with a map than a list or table of data?