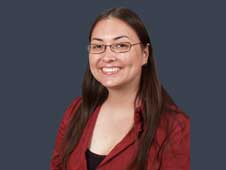 Meet Margaret Glasscoe, a member of the Solid Earth Group at NASA's Jet Propulsion Laboratory (JPL) in Pasadena, California. Margaret is part of a team of scientists using satellite data, simulations, and computer models to study how Earth's crust deforms in response to large earthquakes. Their goal is to improve forecasting, prediction, and risk estimation of earthquakes, volcanic eruptions, and landslides.

On a single day on Earth, thousands of earthquakes may occur. Big earthquakes (magnitude 7.0 or greater on the Richter scale) can cause major damage and loss of life. On average, there are about 18 "big" earthquakes per year worldwide. But predicting earthquakes can be tricky business. Scientists can identify areas where it is most likely for a big earthquake to occur, but they cannot predict the exact location, time, or magnitude of an earthquake . . . at least not yet. 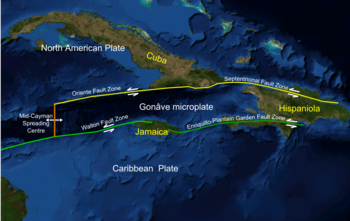 NASA Whirlwind Graphic of Faults around Haiti. Click on the image for a larger view.
The energy that gets released by an earthquake doesn't appear instantaneously at the time of the quake. It builds up over time in the form of stresses in the Earth's crust—we just can't see it happening. However, satellite technologies being developed at NASA and elsewhere are reaching unprecedented sensitivities to changes in ground motion that might make it possible to detect signs of an impending earthquake days or even weeks before it happens.

One method is Interferometric-Synthetic Aperture Radar (InSAR), the same technique used by Dr. Zhong Lu (Week 6) to study land subsidence in Louisiana. This technique is so sensitive, it can detect ground motions as miniscule as 1 millimeter per year. By observing and monitoring these motions around faults, scientists can determine where points of high strain are mounting and will eventually be able to forecast the likelihood of major earthquakes on a monthly basis. Scientists are also looking at surges in infrared radiation and fluctuations in Earth's magnetic field as possible cues for impending earthquakes. Read the NASA article Anticipating Earthquakes to learn more.