Using Giovanni to Study Chesapeake Bay
Compare Data Under Different Environmental Conditions
Look at How Chlorophyll Concentrations Change Over One Year
Export Giovanni Images in an Animation to ImageJ, If You Have Time
Movies on This Page
top of page 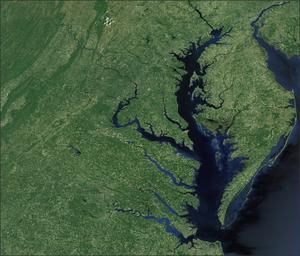 No matter where you live&acirc;&#128;&#148;along the coast, in the heartland, or somewhere in between&acirc;&#128;&#148;your life is affected by water quality. In places like Chesapeake Bay, a major water quality concern stems from nutrient loading (increased levels of dissolved nitrogen and phosphorous). As water makes its way through a local watershed (region of land that drains into a body of water) and eventually to the ocean, it is inevitably affected by how people use the land. Runoff from fertilizers applied to agricultural fields, golf courses, and suburban lawns; deposition of nitrogen from the atmosphere; soil erosion; and discharge from aquaculture facilities and sewage treatment plants all contribute to increasing nutrient content in coastal waters. When phytoplankton (a type of algae) are overfed with excess nutrients, their reproduction rates can increase significantly, causing what is known as an algal bloom.

Water discolorations associated with algal blooms can be easily identified from space. These discolorations are largely due to the chlorophyll (the green pigment associated with photosynthesis) contained in the phytoplankton. Other factors such as suspended sediment, colored dissolved organic matter, and bottom reflections can also affect the "color" of the ocean. The Sea-viewing Wide Field-of-view Sensor (SeaWiFS) is an instrument on the Orbview-2 satellite that collects ocean color data (measurements of light intensity at visible wavelengths) that are used to calculate characteristics like chlorophyll-a concentration and water clarity.

We'll use Giovanni to explore SeaWiFS monthly chlorophyll-a concentration data in Chesapeake Bay. A very dry month (April 2002) and a very wet month (April 2003) show how chlorophyll concentration in the Bay is affected by upstream conditions in the Chesapeake Bay watershed. These different conditions cause very apparent changes in the biological properties in the waters of the Bay and along the coast.

NOTE: All of the same operations described below can also be performed with ocean color/chlorophyll data from the MODIS (Moderate Resolution Imaging Spectroradiometer) instrument aboard NASA's Aqua satellite. As the youngest of NASA's ocean color instruments, MODIS-Aqua is likely to be the sensor of choice for 2010 and beyond.


Look at How Chlorophyll Concentrations Change Over One Year

Try looking at how chlorophyll concentrations in the Chesapeake Bay region change from month to month over the course of a year.


Export Giovanni Images in an Animation to ImageJ, If You Have Time

A Giovanni animation isn't a single file you can download. Rather, it is a set of separate images displayed in sequence. Furthermore, while Giovanni produces great visualizations, it doesn't offer tools to analyze the visualizations after you've created them.

One of the key themes of this course is integrating the tools you're learning to use. Using a fairly simple procedure, you can copy Giovanni images into ImageJ where you can stack, animate, and analyze them. You can also save your stacks as TIFF or GIF files for distribution.

If you have time and want to give it a try, this movie will show you how. The technique involves a fair amount of window manipulation, so don't worry if it takes you a couple of tries to get the procedure down. Remember - you can't hurt anything!

Show me a movie about exporting Giovanni images to ImageJ

As you watch the video, be aware that a bunch of repetitive steps in the middle have been cut out to keep from putting you to sleep!


Movies on this Page 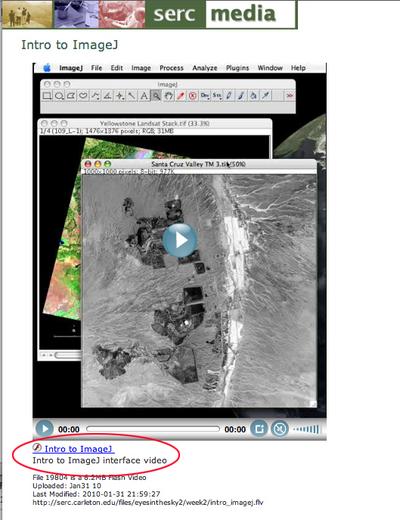 Exporting from Giovanni to ImageJ
top of page

Exporting from Giovanni to ImageJ
top of page