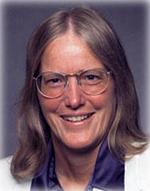 Claire Parkinson is a NASA scientist. She has been a climatologist at NASA's Goddard Space Flight Center ince July 1978. She uses satellite data to study the connection between polar sea ice and climate. She has also developed computer models of sea ice found at the surface of oceans near the North and South poles. Sea ice covers huge areas and reflects sunlight back to space. It also protects ocean water from the cold atmosphere.

Since April 1993, Dr. Parkinson has been Project Scientist for NASA's Aqua satellite mission, which launched in May 2002. The Aqua mission provides data on the interactions of the water cycle, as water moves between Earth's atmosphere, ocean, land, and ice. She wrote an introductory book on examining the Earth with satellite imagery, has co-authored a university textbook on climate modeling, and has co-edited two books on satellite observations related to global change. For the past two years, she's collaborated with a polar bear expert from the Canadian Wildlife Service, examining the possible impacts of sea ice on polar bear populations.

Satellite data allows Dr. Parkinson to track how the thickness and extent of sea ice has changed over the years. She uses computers to make maps and plots of the data. This information helps explain changes in the ice. The results can be surprising and exciting. All of this work helps us learn new things about the Earth system.

"Sea ice in the arctic always increases a great deal in the wintertime. It decreases during the summertime. That's true every year. What we're more interested in is how it changes from one year to another. And we've seen – by using satellite data that gives us pictures of the entire sea ice cover – we've seen that it has retreated somewhat from the late 70's until now, and that's a concern because it is affecting other elements in the climate system." - Claire Parkinson

Dr. Parkinson does most of her work in an office, but sometimes she does fieldwork in Earth's polar regions. There, she makes direct measurements of the sea ice thickness. These are used to verify or ground truth the satellite data.

Like other scientists, Dr. Parkinson writes about her work in science journals. She also explains her work at science meetings and to reporters. And she goes to schools to talk about sea ice and Aqua. She even wrote a book about how satellites are used to study Earth.