Eyes on Drought — Water and Energy for a Thirsty Southwest 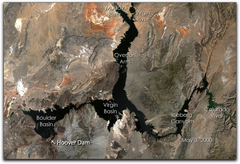 Except for some coastal areas, the southwestern United States is mostly desert — beautiful in it own way, but dry and inhospitable. In the early 1920s, the southwestern states realized that they needed to plan for the water and energy needs of their rapidly expanding population and for agricultural development. The Bureau of Reclamation began making plans to build a series of dams along the Colorado River to store water and generate electricity.

The Bureau began the construction of Boulder Dam, later renamed Hoover Dam, in 1931. The dam was completed in 1936 and soon formed one of the world's largest reservoirs, Lake Mead. Over 97% of the water that flows into Lake Mead comes from rain and snowfall in the Colorado River watershed of the Western Rocky Mountains. Historical records show that patterns of severe drought frequently strike this region.

As the graph below shows, the water level of the lake has fallen dramatically since 2003. Today, a visit to Lake Mead and Hoover Dam shows a lake surface far below the high water mark, surrounded by a broad, white "bathtub ring" of mineral deposits left along the shoreline by the retreating water. As of January 2010, the elevation of the lake surface has dropped by over 130 feet, and the lake is at 44% capacity. Planners project that if the drought continues, the dam will eventually be incapable of generating a reliable supply of electricity. Communities that depend on the water and power supplied by the lake will be forced to look elsewhere for these important resources. 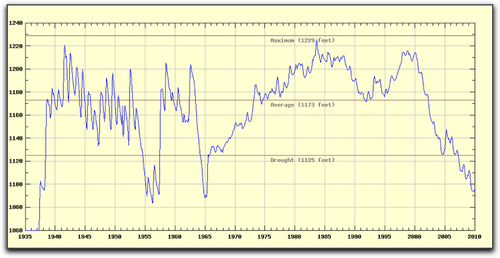