Example Project 1: Create a Virtual Poster for Your Project

How Has the Aral Sea Changed Over Time?

Image that Represents the Project

Satellite images of the Aral Sea showing the change in size of the sea for a period of eleven years, from August 2000 through August 2010.

We analyzed NASA satellite images of the Aral Sea, making distance and area measurements to characterize changes in the size of the lake over time. We used eleven Moderate Resolution Imaging Spectroradiometer (MODIS) images, each taken in August for the years 2000 through 2010. The images also display a line that represents the 1960 shoreline of the Aral Sea. Based on the spatial resolution of the image, we set a scale so that pixels in the image represent actual kilometers on Earth. We graphed the change in distance and area measurements over time to investigate the rate of change and to predict when the Aral Sea might disappear completely. Our research has implications for other similar environmental situations.

Until quite recently, the Aral Sea was similar to North America's Great Lakes—it was a huge body of fresh water, filled by rivers that brought rain and snow melt to it from distant mountains. Though it was once the fourth largest freshwater lake in the world, it has shrunk dramatically since 1960. In fact, the Aral Sea in central Asia is drying up. Rivers that once flowed into the lake have been diverted to irrigate crops. With the decrease in the amount of water flowing into the lake, evaporation has become the dominant process. As fresh water evaporates from the lake and is not replenished, the amount of dissolved minerals (salts) in the water increases and the area of land covered by the water decreases.

The environmental changes in the lake and surrounding region have been dramatic and difficult. The change in water chemistry (increased salinity) wiped out huge populations of fish. The decline of the fish populations, in turn, wiped out the commercial fishing industry on the lake. Today, fishing boats sit in the desert many kilometers from the water's edge. The lakebed sediments (fine-grained sand and dirt) that are now exposed on the desert floor can be picked up by wind quite easily, contributing to large dust storms in the region. In our research project, we studied the Aral Sea, investigating the rate at which it is changing and considering implications for its future and that of similar environmental situations.

How has the Aral Sea changed over time?

We think that the loss of water in the Aral Sea has occurred at a steady, linear rate through time and that it could dry up completely within 10 years.

Image that Highlights Data or Analysis 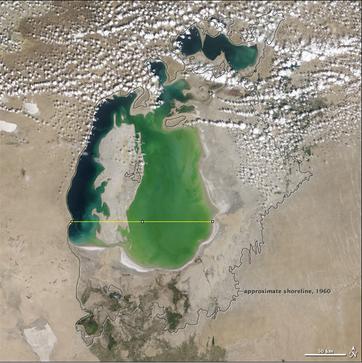 Measuring the distance across the Aral Sea using the straight line selection tool in ImageJ for an August 2000 satellite image.

From our graphs, it appears as if the Aral Sea is shrinking at a steady rate through time. However, because we are missing data from the years 1961 through 1999, it is not possible to characterize the loss as either a linear or exponential rate. The last 10 years exhibit a linear trend, but we do not know what this looked like during the missing years.

Furthermore, our projections are based on the assumption that the lake will continue to lose water in future years. In fact, in 2010, both the width and the area of the Aral Sea increased. We measured the width and came up with 126 kilometers. The area was 9437 kilometers squared. If steps are taken to replenish the water, then the sea might not dry up after all.

Based upon the data we collected and the graphs we produced, the Aral Sea is shrinking at steady rate of change. At its current rate of loss, it will take approximately 3 or 4 years for the lake to disappear. This calculation is only theoretical because distance across the lake at only one location as well as area of the lake is not a direct proxy for the volume of the lake. Furthermore, the projection assumes that the lake will not gain water. Our 2010 measurement shows the Aral Sea beginning to increase in size. Further study of this lake is needed in additional years.

Implications for the Future

If the Aral Sea continues to shrink, it is in danger of completely drying out. Further loss of the Aral Sea could have significant negative impacts on agriculture and human health in surrounding communities and beyond as sand full of salts, minerals, and toxins gets swept away from the dried up lake bed. This environmental situation is not limited to the Aral Sea. We need to monitor our lakes to ensure an adequate supply of water for the future.


Right-click(PC) or control-click(Mac) any of the links below to download files to your computer.

Create a thread to share with the author(s) your questions and ideas about this project.

Comment? Start the discussion about How has the Aral Sea Changed Over Time?.