Part A: Overfishing in Georges Bank 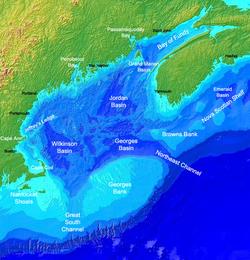 Map of the Gulf of Maine; Georges Bank is the light blue region in the bottom center of the image. Image courtesy of NOAA and U.S. Geological Survey (USGS) Woods Hole, MA. Labels by Syagria.

Georges Bank is an underwater bank situated along the eastern edge of the Gulf of Maine between Cape Cod and Nova Scotia. This region is one of the most biologically productive marine areas on the eastern seaboard, historically accounting for a large percentage of New England's commercial fish landings the part of the fish catch that is put ashore . The Georges Bank fishery is particularly well-known for its groundfish—species such as cod, haddock, and flounder that feed near the bottom of the ocean.

1. Look at the graph below of trends in Georges Bank haddock catch and mortality from 1969 through 2016. 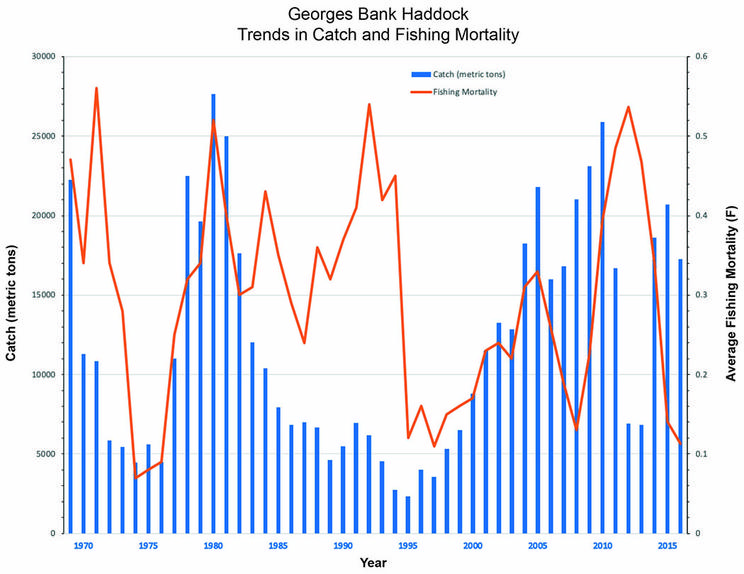 
1: Describe the trends you see in the Haddock landings from 1969-2016. Are there steady trends or distinct turning points?

2: Calculate the difference between the greatest and least landing values. What percentage of the maximum yield was the minimum yield? In what years did these extremes occur?

3: Look carefully at the years 1985-1994. What does it mean for the fishing mortality to be consistently "high" while landings were consistently "low"?

Overfishing is the consequence of removing fish from the oceans faster than they can replenish themselves. This occurs when fishing mortality exceeds the Maximum Fishing Mortality Threshold (MFMT, or FTHRESHOLD). This value is normally equivalent to FMSY, where MSY (maximum sustainable yield) is the maximum catch the stock can sustain without impairing its ability to replenish itself through reproduction. Therefore, MSY is a measure of how many fish can be taken from the sea without causing the stock to become depleted.

Answer the following questions to check your understanding of the information provided in the Georges Bank Haddock Trends in Catch and Fishing Mortality graph above.

2. Look at the graph below of trends in Georges Bank and Gulf of Maine cod catch and mortality from 1977 through 2016. 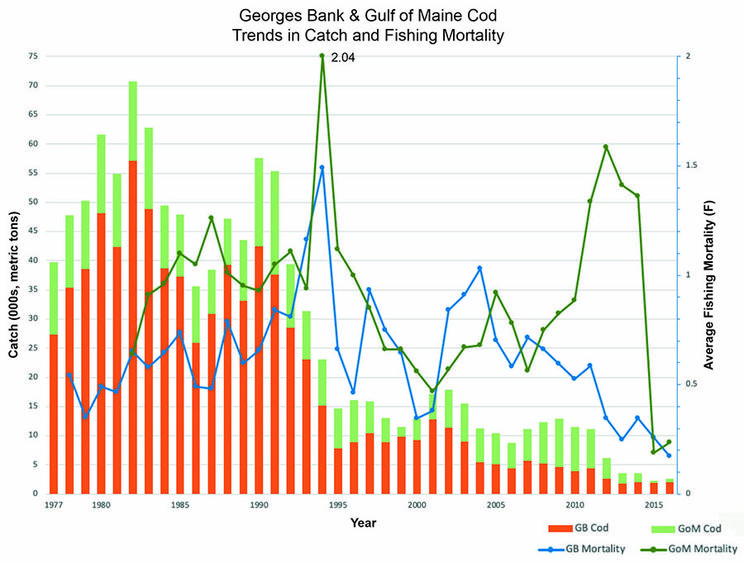 Answer the following questions to check your understanding of the information provided in the Cod Trends in Catch and Fishing Mortality graph above.