Droughts of the Past

Part A: The Dust Bowl 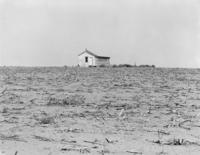 Hide
Photo by By Irving Rusinow, Courtesy of National Archives and Records Administration, Records of the Bureau of Agricultural Economics.


Drought that gripped the Great Plains of America from 1931 through 1939 changed the country forever. Drawn by the opportunity to farm their own land, thousands of newly settled farmers cleared millions of acres of grassland to plant crops. When drought set in, crops died, topsoil blew away, and many of the farmers and their families moved away.

The environmental, social, and economic results of the drought and their repercussions through American life are documented in the PBS film "Surviving the Dust Bowl."

An excerpt from the program description:

In 1931 the rains stopped and the "black blizzards" began. Powerful dust storms carrying millions of tons of stinging, blinding black dirt swept across the Southern Plains--the panhandles of Texas and Oklahoma, western Kansas, and the eastern portions of Colorado and New Mexico. Topsoil that had taken a thousand years per inch to build suddenly blew away in only minutes. One journalist traveling through the devastated region dubbed it the "Dust Bowl."

"Surviving the Dust Bowl" is the remarkable story of the determined people who clung to their homes and way of life, enduring drought, dust, disease--even death--for nearly a decade.