Freshwater runoff—water flowing in rivers or pooled in ponds or lakes on Earth's surface—is the most convenient water resource for human use. Throughout history, civilizations have developed along waterways and around lakes where humans could get water for drinking, cooking, and washing as well as for watering their crops. The map on the right shows the amount of freshwater available on the surface in regions around the world.

Without technology, populations would be restricted to living in places where they had continual access to fresh surface water—they could only live in the areas shown in shades of medium to dark blue on the map. We know, however, that this is not the case. Humans have made permanent settlements on almost all parts of our planet.

Is there enough freshwater to go around? 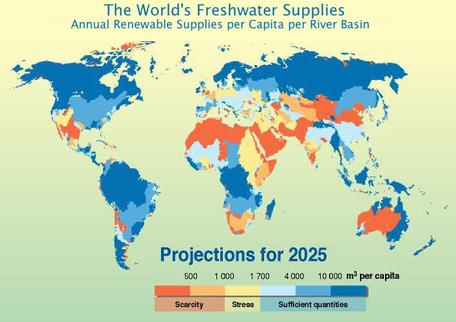 Using a variety of tools and technology, populations have learned to survive in relatively dry areas. Humans build dams to save water that would otherwise flow downhill, dig wells to access groundwater that has built up over thousands of years, and transport water via canals from wet areas to dry ones. These technologies have enabled large numbers of people to live in areas that receive very little rain, but no one is immune to water shortages. Reservoirs can only catch water that falls upstream from them, non-renewable supplies of groundwater become depleted, and transporting water by canal is expensive and inefficient. If rainfall totals drop below normal for an extended period in any area, crops, animals, and people can suffer from the shortage of water.

The total amount of fresh surface water produced by the water cycle has remained essentially the same over thousands of years. As freshwater is always being produced by the water cycle, some people believe that we will never run out of water. However, as the volume of fresh water being produced always remains about the same and the number of humans on Earth continues to increase, there is a worldwide decrease in the per person availability of water. By 2025, huge populations are projected to be facing water stress or water scarcity.

Go to Confronting a World Freshwater Crisis, a report and website published by Scientific American. Spend at least 10 minutes exploring issues and solutions at the site.

6. Keep a list of the features you visit. For each feature, describe at least one concept or action that can help populations confront the impending shortage of freshwater.