Part A: Viewing Earth from Space 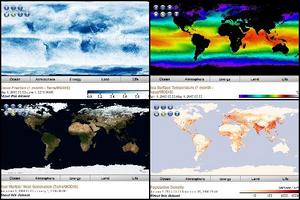 Air, Water, Land, & Life: A Global Perspective. Images courtesy of NASA NEO.
Before satellites, remote sensing images were obtained in a variety of creative ways. Early remote sensing images in the mid to late 1800s were taken by hot-air balloonists. In 1897, Alfred Nobel (for whom the Nobel prize is named) took the first aerial photograph from aboard a rocket. In the early twentieth century, remote sensing images were even taken by cameras strapped to fleets of pigeons and kites. As technologies advanced throughout the 1900s, remote sensing via cameras aboard airplanes became valuable for things like wartime reconnaissance, urban development, disaster damage assessment, land use surveys, agricultural status, and oil exploration. But it wasn't until the latter half of the twentieth century, with the development of artificial satellites, that remote sensing expanded to the global scale. Today, more than a dozen NASA satellites keep constant watch over Earth.

The full-Earth images below are the western- and eastern-hemisphere views of NASA's spectacular "blue marble" image of Earth. Scientists and visualizers created these true-color images by stitching together months of observations of the land surface, oceans, sea ice, and clouds into a seamless, true-color mosaic of every square kilometer (0.386 square mile) of our planet. Click here to learn more about these images.

Earth system processes take place in and between the atmosphere, water, soil, and living components of the planet. These processes also include energy from the Sun, and the gases and particles that enter the atmosphere and oceans from both natural and anthropogenic (human-related), sources. The NASA Earth Observations (NEO) site is a great place to find imagery of NASA Earth science datasets. NEO has over 20 distinct energy, atmosphere, ocean, land, and life datasets, which are available as global snapshots in daily, weekly, and monthly time spans. In this part of the investigation, you will examine images of the Earth, looking for available information (data displayed, unit of measure, range of values, etc.) then for any noticeable patterns within the image.