Lab 4: It's All Connected: Global Circulation

Part B: Message in a Bottle 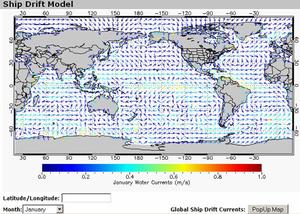 In Part A, you traced the pathways of wind and water into and out of your study region. Now, you will use computer simulations to track ocean currents.

1: Imagine dropping a message in a bottle into the ocean at a given location and observing where the object would end up as a result of surface currents. Based on the pathways you traced in Part A, where do you think your bottle would end up?

Use a computer model to test your prediction. The model uses simple physics equations of motion and information about ocean surface currents from historical monthly ship drift data to predict the motion and pathways of objects adrift at sea.

2: How well does your prediction of where your message in a bottle would end up agree with the computer model? Explain.

4: What events and activities in your region could affect other parts of the globe?

5: Compare and contrast the paths of these drifters with those of drifters dropped into the ocean near your study region.

6: Why do you think there are international laws for dumping waste/trash/chemicals in the ocean, rather than just local laws? Do these laws only need to extend to nearby neighboring countries? Explain.