Part A: CO2 and Ocean pH - What's the Connection?

Oyster farmers have been on the front lines of ocean acidification. In Washington and Oregon, oysters farms are in coastal Pacific waters where upwelling currents are bringing up cold, deep water with higher amounts of CO2 and a more acidic pH. Watch and listen to two oyster farmers from Taylor Shellfish Farms in Washington state talk how about ocean acidification is impacting their young oysters.

Why is ocean acidification important to oyster farmers?

Surface ocean acidity has increased by 30% since pre-industrial times 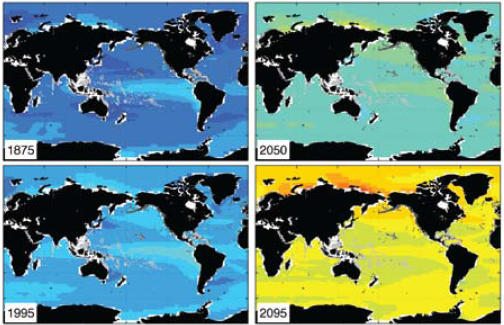 ×
Changes in ocean acidity as measured by pH. Blue indicates less acidity; yellow/orange indicates greater acidity. Source: US National Center for Atmospheric Research Community Climate System Model 3.1 (CC SM3)-modeled decadal pH at the sea surface centered around the years 1875, 1995, 2050 and 2095.
Recent estimates by scientists ( Le Quere et al., 2012) have calculated that approximately 26% of all CO2 emitted from human-related activity was absorbed by the oceans during the decade 2002 - 2012. That's 2.5 billion gigatons of excess carbon that moved from the atmosphere into the ocean each year during that one decade. Some of this excess CO2 ends up in deep ocean currents that eventually upwell along coastal areas bringing all that excess CO2with them and to oyster farms.

Scientists have also observed that the oceans have become more acidic since the beginning of the Industrial Revolution. They project that this trend will continue in this century as indicated in the visualization pictured on the right. Scientists are concerned that ocean acidification—a gradual acidification of seawater—could have negative consequences for marine organisms, marine food webs, and entire ecosystems. To better understand what ocean acidification is and why it happens, you will: 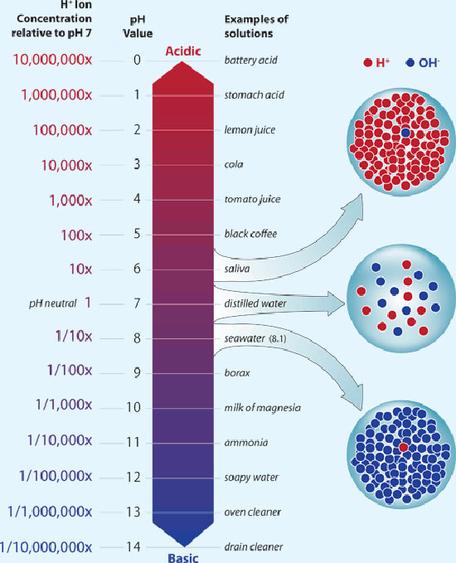 Based on your understanding of the pH scale, which of the following statements are TRUE? 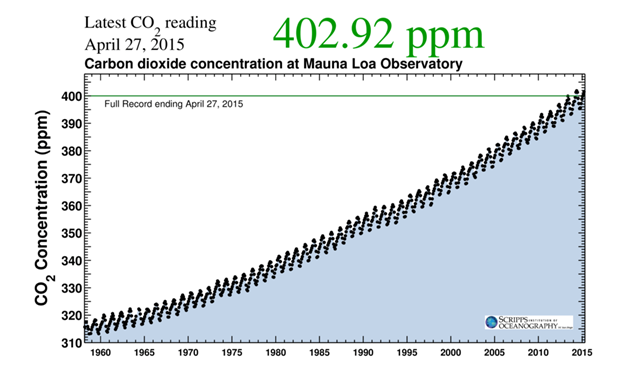 Provenance: Scripps
Reuse: This item is offered under a Creative Commons Attribution-NonCommercial-ShareAlike license http://creativecommons.org/licenses/by-nc-sa/3.0/ You may reuse this item for non-commercial purposes as long as you provide attribution and offer any derivative works under a similar license.
So far, you have learned that the concentration of CO2in the atmosphere is increasing and some of this extra CO2is dissolving in the oceans. But, can an increase in dissolved CO2 change the pH of sea water? Try this experiment to find out! With your lab group or partner, choose one of the following hypotheses:

To test your hypothesis, you will use a chemical called bromothymol blue (BTB). This chemical is commonly used in many laboratory experiments to test for a change in pH. You will add CO2 to plain tap water. The source of CO2 you will use in this experiment will be the CO2 that you exhale.

Materials you will need for your group: 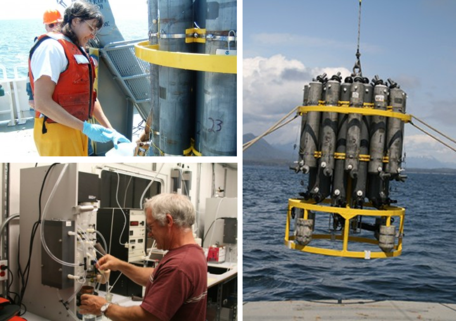 Provenance: NOAA
Reuse: This item is offered under a Creative Commons Attribution-NonCommercial-ShareAlike license http://creativecommons.org/licenses/by-nc-sa/3.0/ You may reuse this item for non-commercial purposes as long as you provide attribution and offer any derivative works under a similar license.
The image on the right shows ocean researchers using a rosette device to collect seawater samples to measure pH and dissolved CO2 in addition to other biological, chemical and physical parameters. By sampling in the same location for several years, researchers can generate times series data that can identify trends in a changing ocean chemistry.

Using the video of the interactive below, you can compare three different time series data sets collected from Station Mauna Loa and Station Aloha in the Pacific Ocean.

As you watch the interactive click forward, note that each data set shows considerable variability in yearly measurements but when this variability is averaged over time, definite trends can be observed. Make note of these trends and what these trends might tell you about causality between increased atmospheric CO2 and ocean acidity. Pause or replay the video to view again. 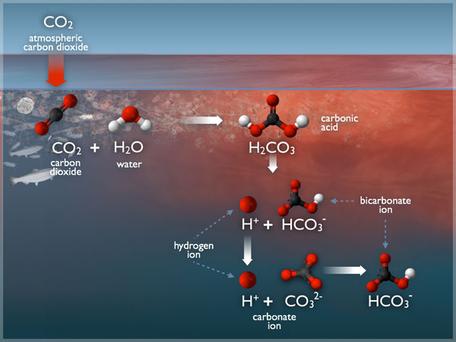 Provenance: WHOI
Reuse: This item is in the public domain and maybe reused freely without restriction.
In Lab 6A, you learned that CO2 can dissolve in seawater and become part of the ocean's carbonate chemistry system. As the oceans absorb increasing amounts of CO2, the ocean's pH chemistry becomes more acidic. This change in acidity is causing changes in the ocean's carbonate system. Ocean acidification, or "OA" for short, is the term given to these chemical changes in the ocean as a result of increasing carbon dioxide emissions.

How is the chemistry of the ocean carbonate system changed by a more acidic pH? Find out by watching the short video below on ocean chemistry. As you watch the video, make note of what happens to the amounts of:

Why Is it Called Ocean Acidification? University of Plymouth

1. Throughout this module, you have learned that a change in one part of the carbon cycle can cause changes in other parts of the carbon cycle. Keeping this important theme in mind, explain how an increase in CO2 fossil fuel emissions can alter the ocean.

Want to find out more about ocean acidification and ocean chemistry? Check out these resources:

This animation is not included in the EarthLabs iPad app. To view this animation, please use a flash-enabled device.