Deforestation and the Carbon Cycle

Part A: Changes in Forest Cover 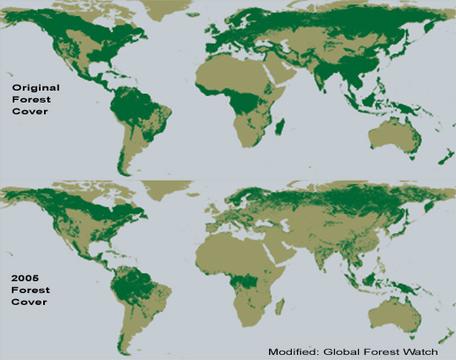 ×
Changes in forest cover over time.

Provenance: Global Forest Watch
Reuse: This item is offered under a Creative Commons Attribution-NonCommercial-ShareAlike license http://creativecommons.org/licenses/by-nc-sa/3.0/ You may reuse this item for non-commercial purposes as long as you provide attribution and offer any derivative works under a similar license.
Examine the image of changes in forest cover, pictured on the right. In the past, much of the Earth was once covered by forests. However, the majority of these forests were cleared long ago to make way for the needs of a growing human population. This is particularly true in regions with a temperate climate such as Britain and other parts of Europe where agriculture took an early hold. Interestingly, the World Wide Forest Report found that when the Roman Empire was in control of Europe, 90% of the continent was forested land. Today, as indicated in the image on the right, Western Europe has now lost over 99% of its primary forest. 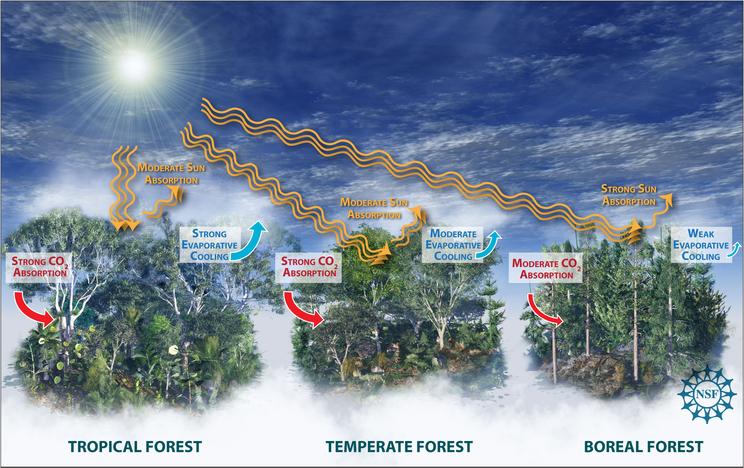 Provenance: Credit: Nicolle Rager Fuller, National Science Foundation
Reuse: This item is in the public domain and maybe reused freely without restriction.
Forests play an integral role in Earth's climate. Tropical, temperate and boreal forests each have varying impacts on the climate by both cooling and warming the Earth. The relationship between forests, climate, and the carbon cycle is currently an area that scientists are intensively studying.


Causes and stages of deforestation 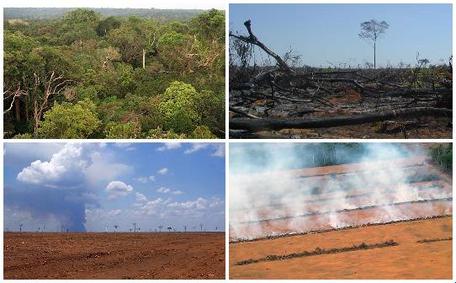 Provenance: NASA Clockwise from top left: Undisturbed Amazonian tropical rain forest (photo credit: Don Deering); deforestation stage 1 (photo credit: D. Morton); deforestation stage 2 (photo credit: D. Morton); deforestation stage 3 (photo credit: G. van der Werf)
Reuse: This item is offered under a Creative Commons Attribution-NonCommercial-ShareAlike license http://creativecommons.org/licenses/by-nc-sa/3.0/ You may reuse this item for non-commercial purposes as long as you provide attribution and offer any derivative works under a similar license.
If left to themselves, forests impacted by natural events such as wildfires, will regenerate over time. Forests can also be restored by reforestationreestablishing/planting forest on land that had recent tree cover. and afforestation refers to land that has been without forest for a very long time. projects. Deforestation is different. When land is deforested, trees are not replaced and the land is converted to a non-forest use. For this reason, deforestation has long term effects on the carbon cycle, climate and the environment.

1: Describe how deforestation can impact the the amount of carbon dioxide in the atmosphere.

Trouble in the Amazon? 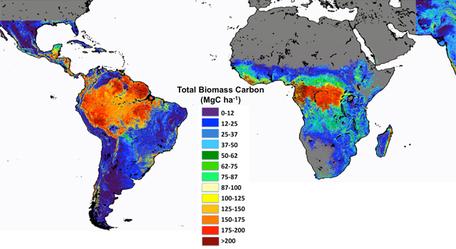 Provenance: NASA
Reuse: This item is in the public domain and maybe reused freely without restriction.
When we think about the Amazon Rainforest being cut down, we might immediately think of a tragic loss of biodiversity. However, as indicated in the NASA image on the right, there are massive amounts of carbon stored in the biomass of the Amazon Rainforest.

In terms of the carbon cycle, explain why deforestation in the Amazon is a global concern and not just a regional concern for the Brazilians. 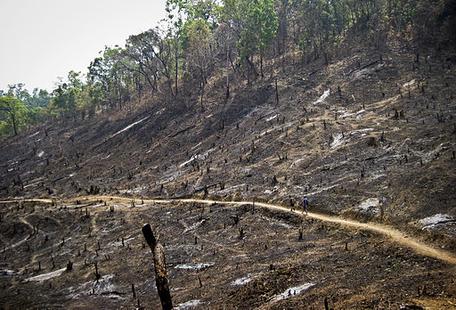 Provenance: Wikicommons By mattmangum (Slash and Burn) [CC BY 2.0 (http://creativecommons.org/licenses/by/2.0)], via Wikimedia Commons
Reuse: This item is offered under a Creative Commons Attribution-NonCommercial-ShareAlike license http://creativecommons.org/licenses/by-nc-sa/3.0/ You may reuse this item for non-commercial purposes as long as you provide attribution and offer any derivative works under a similar license.
Cutting down trees is only one part of the complex "carbon cycle" story in areas of deforestation. What happens to the land left behind? Answers to this question are often dependent on the local economy and the needs of small communities to provide for their families.

In many parts of the world, small farmers and ranchers use a very old technique called "slash and burn" to clear and prepare the land for agriculture and cattle. In slash-and-burn agriculture, farmers will typically cut forests months ahead of the dry season. During the dry season, the "slashed" trees dry out and are then burned. The ash from the burned trees fertilizes the soil to support crops such as as rice, corn and soybeans and grass for cattle. Unfortunately, soil nutrients such as nitrogen are used up fairly quickly, the land becomes barren and farmers then move on to slash-and-burn other parts of the rainforest. In this way, fire and soil become part of this complex carbon cycle, the economy of the rainforest and the people who live there. So, what can be done to mitigate the impact of slash and burn farming on the carbon cycle? Read about the work of Mike Hand, a British ecologist, and Inga trees to find out! 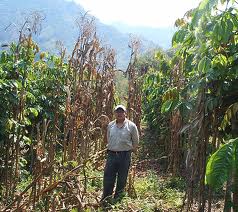 Mike Hand, a British ecologist, has lived in and studied the rainforests in Honduras for over twenty years. He observed that slash and burn was creating a vicious feedback cycle that destroyed forests in order to create agricultural land that could be farmed only temporarily. Eventually, the cleared land turned into a nutrient-deficient, barren wasteland; farmers grew poorer and poorer, and then farmers cut down more rainforest. Mike's ideas and efforts on stopping this vicious feedback cycle of "slash and burn" were portrayed in an award-winning documentary Up in Smoke.

In what ways does deforestation impact local people and their economies?

2: Think about the complex story of slash and burn agriculture and the carbon cycle in the Central American and Amazon rainforests. Describe how slash and burn agriculture impacts the amount of carbon dioxide in the atmosphere. HINT: You may want to incorporate what you learned about wildfires, black carbon and feedbacks in Lab 2C into your answer.

Deforestation is Messing with our Weather and War, Plague no Match for Driving Up CO2