Carbon In the Atmosphere

The carbon cycle has changed over Earth's history

Imagine if fossils didn't exist. How would we know that dinosaurs, woolly mammoths and other long-extinct creatures once roamed the Earth and swam in our oceans. Like fossils, carbon dioxide has left its own set of "clues" about past atmospheres and climates in ice cores a core sample that is typically removed from an ice sheet, most commonly from the polar ice caps of Antarctica, Greenland or from high mountain glaciers elsewhere. from Antarctica.

Take several minutes to examine the graph pictured above and then answer the Checking In questions below. The carbon dioxide data (blue lines) and temperature data (red lines) are taken from ice cores drilled in Vostok Station Antarctica. The peaks of carbon dioxide indicate interglacialwarm period within a glacial age periods and the troughs represent ice ages any geological period in which long-term cooling takes place and ice sheets and glaciers exist. (also called glacial ages).

Answer the following questions based on the graph above:

The ice core CO2 and temperature data you just explored raises some interesting, more complex questions. Read the questions below and be prepared to discuss them after watching the movie below. Take notes, pausing and replaying as needed. NOTE: Your teacher may decide to assign each group specific questions to take notes on.

To help you answer these important questions, focus on the following topics as you watch the video: NOTE: If the video does not load, you can watch it at this link: Mother Nature's History Book from the Pacific Institute for Climate Solutions

Show me more about ice cores

Hide
Ice cores come from every place in the world where ice accumulates over time. Ice cores from the Antarctic and Greenland ice sheets are the most famous. The longest records of atmospheric CO2 in ice cores collected by scientists extends back to 800,000 years. Molecules of CO2and other gases in the atmosphere diffuse into the top layer of snow and are trapped there in ice bubbles. As new layers of snow and ice accumulate over time, a record of concentrations of atmospheric CO2 and other gases form over time revealing clues about past climates. Watch this video Ice Core Secrets Could Reveal Answers to Global Warming - Science Nation - YouTube and other videos at The National Ice Core Laboratory

1: Describe the relationship between carbon dioxide, temperature and ice ages.

A slow acting geologic carbon cycle is key to reducing the concentration of atm CO2 over very long time scales (hundred thousands of years to millions of years). 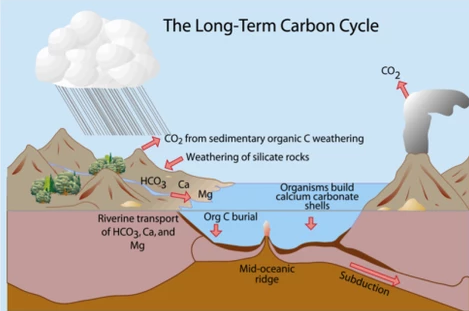 Provenance: Dr. Lingling, WuUniversity of Waterloo
Reuse: If you wish to use this item outside this site in ways that exceed fair use (see http://fairuse.stanford.edu/) you must seek permission from its creator.

As Earth swung between ice ages and interglacial periods over the past 800,000 years, the concentration of atm CO2 rose and fell with these swings. A slow-acting geological carbon cycle is responsible for reducing the concentration of atm CO2as Earth swung from interglacial periods to ice ages. Atmospheric chemistry, rain, and rock weathering worked in concert to slowly remove CO2 from the atmosphere over long time scales of hundreds of thousands of years. Watch and listen to Harvard University professor Dr. Daniel Schrag explain to high school students why the processes of Earth's geological carbon cycle is critical to the stability of Earth's climate over long time scales. As you watch the video, take notes on the following:

NOTE: If the video does not load, you can watch it at HHMI: The Geological Carbon Cycle

Show me the key concepts of the geological carbon cycle

Here are the key concepts of the geological carbon cycle:

1: Explain how the geological carbon cycle is critical to the stability of Earth's climate over very long timescales.

2: Explain how the Biosphere and Geopshere work together in the geological carbon cycle to create a long term carbon sink of millions of years.

Hide
Rock weathering (Geosphere) produces bicarbonate ions which are washed down by rivers in the ocean. Shell-building marine organisms (Biosphere), such as planktonic coccolithophores, clams, corals, and oysters use these bicarbonate ions (HCO3-) to make their calcium carbonate (CaCO3) shells. Many of these shells eventually sink to the seafloor and become part of deep sea sediments for millions and millions of years.