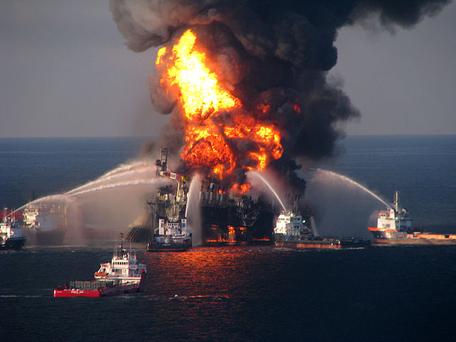 Provenance: Department of Defense. U.S. Coast Guard
Reuse: This item is offered under a Creative Commons Attribution-NonCommercial-ShareAlike license http://creativecommons.org/licenses/by-nc-sa/3.0/ You may reuse this item for non-commercial purposes as long as you provide attribution and offer any derivative works under a similar license.
On April 20, 2010, the Deepwater Horizon oil rig operating in the Gulf of Mexico exploded and sank. Oil and gas moved up the drilling well-bore onto the deck causing a massive fire. The explosion killed 11 platform workers and badly injured 17 others. Following the explosion and sinking of the rig, oil gushed up from the sea floor unabated for 87 days. An estimated 4.9 million barrels of crude oil spilled into the Gulf of Mexico waters inundating the coastlines of Louisiana, Mississippi and Alabama, and damaging coastal ecosystems and fishing industries.

The oil and gas extracted by the DeepWater Horizon rig had been formed and buried in deep sediments millions of years ago. While coal had been used as a fuel resource since 1000 B.C, it wasn't until the arrival of the Industrial Revolution that coal began to replace wood biomass as the primary source of energy. Today, humans are extracting the three primary fossil fuels - coal, oil, and natural gas - to provide energy for a world population that has exceeded 7 billion. Fossil fuels are made of hydrocarbons energy rich organic carbon compounds made of carbon and hydrogen atoms. . In this section of Lab 1, you will investigate how the combustion of fossil fuel hydrocarbons is changing the chemistry of the atmosphere.

Examine the image above of the Deep Horizon oil rig burning in the Gulf of Mexico. With a partner and/or class, talk about the following:

Burning hydrocarbons releases energy, and CO2 as a by-product 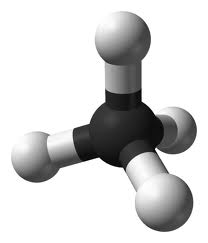 ×
Methane, a small hydrocarbon molecule, is found in natural gas. Methane can also occur naturally in environments such as marshes, bogs, and deep ocean.

The Deep Horizon rig was drilling for crude oil (petroleum) deep within bottom sediments in the Gulf of Mexico. Crude oil is a mixture of several different chemicals which can be refined into hydrocarbon products such as such as motor oil, gasoline, jet fuel, diesel fuel, and heating oil. If you drive a car, heat your home, turn on a light, or enjoy a good backyard barbecue, the energy you are using most likely comes from burning fossil fuel hydrocarbons, a process called combustion the process of burning something; example is when a substance such as wood, coal, or gas reacts with oxygen to produce carbon dioxide, water vapor, heat, and energy .

To learn some important facts about combustion and hydrocarbons, watch this 7-minute video on combustion. Before you watch the video, make note of the Checking In questions below. You will need to answer these questions when you finish watching the video.

NOTE: If this video does not play, you can also watch it at one of these three sites: YouTube , on Vimeo or at the It's Our Air website.

Consider the combustion reaction of methane below. Combustion produces energy but where does this energy come from? 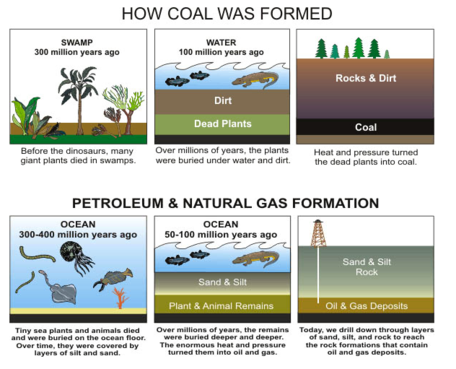 Provenance: U.S. Department of Energy
Reuse: This item is in the public domain and maybe reused freely without restriction.
Fossil fuels are made of hydrocarbons produced millions of years ago

We use fossil fuels on a daily basis but do we know their origins? Contrary to what many people believe, fossil fuels do not come from the remains of dead dinosaurs. In fact, fossil fuels were formed 300 million years ago during the Carboniferous period, before the first dinosaurs evolved. Take a view minutes to examine the image pictured on the right and then watch the video on fossil fuel formation below.

If the video does not play, watch here: Fossil Fuel Formation

Humans are extracting and using large amounts of fossil fuel, but how much? 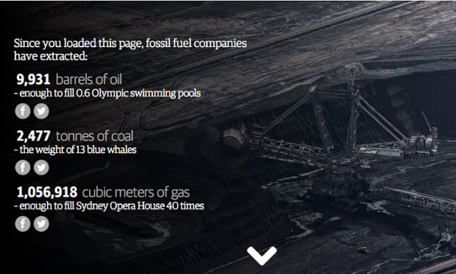 ×
How much fossil fuel has been used in your lifetime? An interactive from The Guardian

Provenance: The Guardian
Reuse: This item is offered under a Creative Commons Attribution-NonCommercial-ShareAlike license http://creativecommons.org/licenses/by-nc-sa/3.0/ You may reuse this item for non-commercial purposes as long as you provide attribution and offer any derivative works under a similar license.
Click here:How much fossil fuel has been used in your lifetime? to enter an interactive created by The Guardian. Click through the interactive until you find out how many barrels of oil, tonnes of coal and cubic meters of gas have been extracted since you were born.

With a peer or with a group, discuss the following:

Are humans changing the chemistry of the atmosphere? How do we know?

Humans have been burning large amounts of fossil fuel hydrocarbons for energy since the Industrial Revolution. Today, approximately 75% of the world's energy needs are fulfilled by burning fossil fuels. We certainly can't get along without fossil fuels at the present, but are we creating a problem when we burn millions of metric tonnes of fossil fuels every year?

Watch this NASA video to find out if we are creating a "Gas Problem" when we burn fossil fuels.


Laboratory Investigation: Are humans changing the chemistry of the atmosphere?

The video you just watched makes the claim that when humans burn fossil fuels, we release CO2 to the atmosphere causing the atmosphere to become warmer. However, the video provides no data as evidence to support this claim. As a matter of fact, some people on the Internet have claimed that humans have no role in rising CO2and instead blame the rise on natural events such as volcanic outgassing. Providing evidence for a claim is a critical component of science. To that end, you will analyze data from a series of graphs, a NASA animation of CO2 emissions and a video presentation given by geoscientist Dr. Richard Alley. As you analyze the data, you will decide whether the data provides evidence that strongly supports, partially supports, or strongly refutes the claim that humans are changing the carbon chemistry of the atmosphere and that this change is leading to a warmer atmosphere. With a peer or small group: 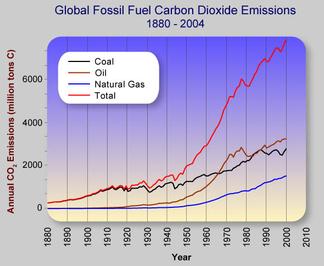 ×
Graph 1: Emissions of carbon dioxide to the atmosphere from burning fossil fuels since 1880- the beginning of the Industrial Revolution. Emissions are measured in millions of metric tons of carbon. Figure by Greg Fiske, Woods Hole Research Center

With your class, discuss the evidence you have just analyzed in terms of the following:

6. Describe how combustion can move carbon atoms from being stored deep in the ground to the atmosphere.
7. Identify and explain at least one piece of evidence supporting or refuting the claim that humans are changing the carbon chemistry of the atmosphere.

Want to learn more about fossil fuels and hydrocarbons? Check out these resources!