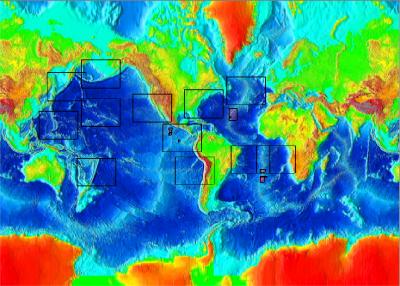 These map images use color to show the shape of Earth's land and seafloor. Areas shown in shades of blue are below sea level, with the deepest depths shown in dark blue. Land above sea level is shown in green, yellow, and red, with the highest elevations shown in red. Examine the color scale on the far right to interpret the colors on the map.

The Learning With Data Solid Earth Data Browser offers an array of Small Area Maps for locations around the world. Each of the small area maps contains at least one plate tectonic boundary (divergent, subduction/collision, or transform fault). 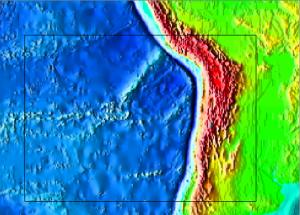 For this Earth Exploration Toolbook chapter, we've chosen the Small Area Map that shows the central section of the west coast of South America. What geographic features can you distinguish in the small-area map of South America?

Show me a sample answer

Hide
Geographic features include the ocean, coastline, and mountains.

Step 2 –
Examine the Distribution of Earthquakes

The following images use red dots to show to location of earthquake epicenters in the study area and worldwide.

Step 3 –
Examine the Distribution of Volcanoes

The following images use brown triangles to show the distribution of volcanoes in your area and worldwide. 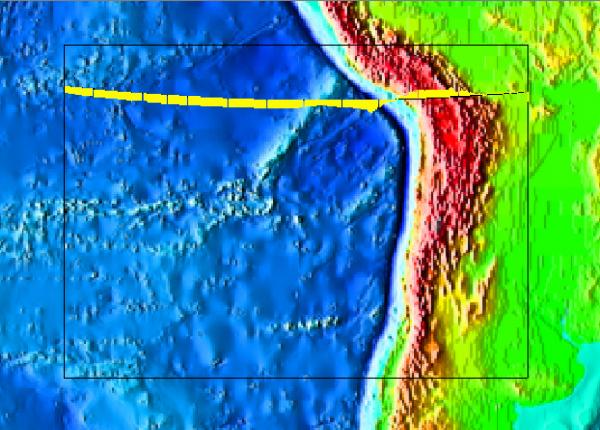 One of the most useful functions in the Solid Earth Data Browser is the Profile Tool. It allows you to draw a line across your area of study, then shows you the topography along that line in another graph. It allows you to visualize the landscape as if you had cut straight down through it with a giant knife. In the map view, the profile line appears as a yellow arc.

For locations where the data are available, seafloor ages are also shown in the cross-section graph. The ages of rocks crossed by the line on the map are shown as a blue line. Along the vertical axis of the plot, information about the elevation is shown in black (the units are meters) and the rock ages are shown in blue (the units are ma for megaannum, meaning millions of years ago).

The topography shows a dramatic dip to great depth and then a steep incline up the continent towards the Andes mountains. The dip (in this example, 6930m deep, with negative number indicating elevations below sea level) shows a trench that parallels the coastline.

The age line shows that the age of the seafloor rocks are not uniform across the ocean floor. Rather, they increase steadily from the western side of the map towards the coastline.

You want to make sure that your interpretations are not based on a single observation alone. You need to be able to discriminate between a deep spot that is like a hole or basin, and a linear feature like a trench, which may be a thousand km long. Here are two more profiles added for comparison. Note that each profile is numbered on both the map and the cross-section plot. 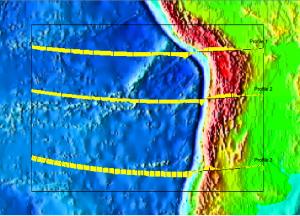 By viewing several cross-section plots, you can see that the pattern of seafloor topography and ocean floor ages is very similar for all the profiles. They show a dip across a linear feature (seafloor trench) that appears to align parallel to the shoreline. There is also the same pattern of increasing seafloor age from the west towards the South American coastline. 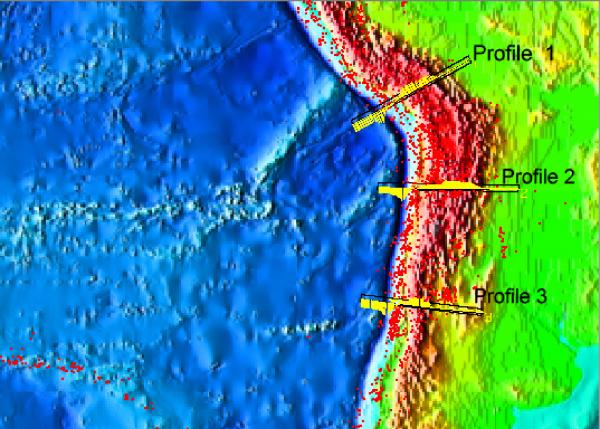 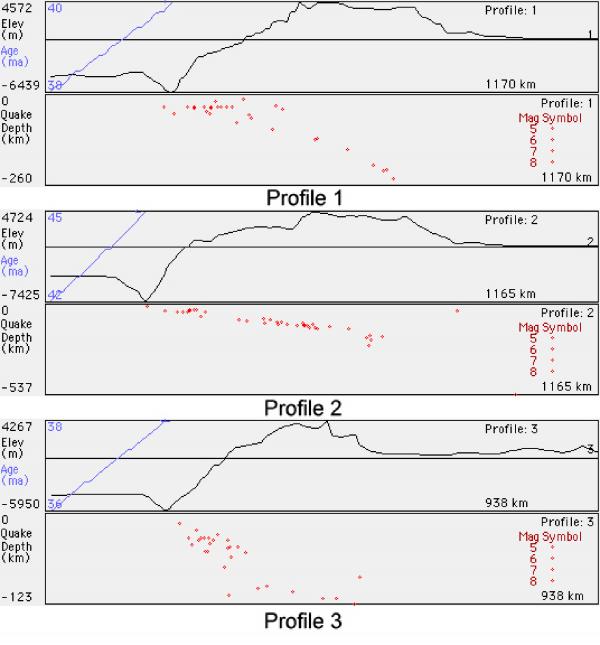 As two segments of solid crust slide past one another, earthquakes may be generated at the slip interface. By examining the precise locations of these quakes in data from seismic stations around the world, the slip geometry can be determined.

The map view image to the left shows earthquake epicenters (a quake's surface location) in western South America. The cross-section graphs below it show elevation profiles with earthquake hypocenters plotted on them. The word "hypocenter" refers to the map location and the depth of an earthquake.

Use the elevation and hypocenter sections in addition to the previously examined plots, to make an argument for the type of plate boundary that is represented at the western edge of South America. When interpreting the cross section plots, be sure to note that the vertical axes change for each plot. This is because the plot is drawn so that the deepest quake for each plot is at the lowest part of the plot.

Show me a sample explanation

Hide
The dip in elevation in each profile reflects a trench that parallels the western edge of South America. The earthquake hypocenter plots also show a dipping pattern, indicating that the plate boundary is a horizontal fault that dips gradually to the east then descends into the earth. Notice that the location and dip of the trench corresponds closely with the beginning of the descending earthquake pattern. This indicates that the trench is associated with the beginning of the subduction process.

It is important to be aware of accuracy limitations of hypocenters. First, the faulting process is complex and rarely occurs on well-defined slip planes. Faults adjacent to and even perpendicular to a main fault can generate quakes. Quakes also occur in the middle of plate boundaries and can be due to volcanic activities, or stress buildup. Furthermore, the locations of earthquakes have errors. In the middle of the ocean, where there are few nearby seismic stations, the depths cannot be determined with great precision and the depth is simply set to 35km. Near land, an accuracy of 0.5 km is considered good for quakes detected by the worldwide array of stations.