Case Study: Using Evidence in the Development of the Theory of Plate Tectonics

Note: This chapter was retired in October 2018. The visualization tool (My World GIS) is no longer supported.

Searching for Patterns in the Clues 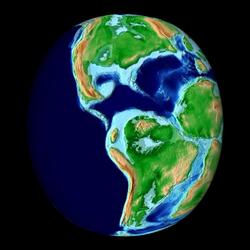 As field geologists, we look for meaning behind our observations by asking questions, looking for patterns, and collaborating with others. The compelling story of Earth's history took shape in the early twentieth century when Alfred Wegener analyzed his field observations and made startling revelations about the movement of continents. First, he combined his observations with those of the past and began to see patterns in data. He observed the close fit of the coastlines of South America and Africa. Then he found more clues including: matching fossils in South America and Africa, mountain ranges that suggested that the Atlantic Ocean may have been closed at one time, and paleoclimate records that suggested that the continents were once located in positions different from where they are today. Although the amount of evidence was overwhelming for his theory of continental drift, it was not until the 1960s, when additional field evidence was analyzed, that the theory of plate tectonics (the modern version of continental drift theory) was widely accepted. The paleomagnetism data, the locations of geologic activity, and seafloor bathymetry were the last pieces of field evidence that helped to solidify the theory of plate tectonics also known as the dynamic Earth theory.

If you were in the field and trying to recreate Earth's geologic past, what types of evidence would you search for? Rocks may contain a record, fossils may hold a key, and patterns of geologic activity may be clues as well. Today, we have access to a wide variety of datasets as well as mapping programs that can help us recreate the story behind the theory of plate tectonics. While completing this chapter, you will use GIS mapping software and add layers of data to a world map. While doing this you will decide if there is enough evidence to support the theory of plate tectonics.

Key Questions Addressed by this Chapter: