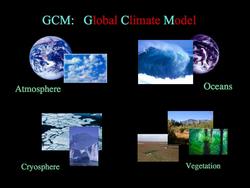 Modeling is using preset differential mathematical equations to represent the forces that control a situation. By changing variables in the equation one can one can envision a future outcome. The primary earth system components that are simulated by a global climate model, (GCM) include the atmosphere, oceans, land surface – including vegetation, and the cryosphere (ice and snow). Interactive diagram of GDC components - from UCAR gives a detailed description about the roles each component plays in the system. 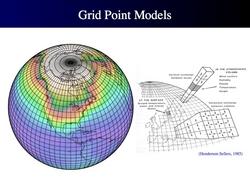 GCMs divide the atmosphere, oceans, and land into a 3-dimensional grid system. The physics equations and parameterizations are then calculated for each cell in the grid over and over again, representing the march forward in time, throughout the simulation. On the left below, is a schematic diagram of the physical processes simulated by GCMs. Many calculations beyond the fundamental physics equations use "parameterizations." Parameterizations are formulas based on empirical evidence, meaning they are based on observations or the results of experiments. 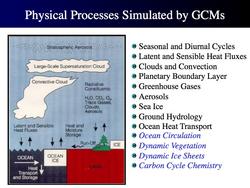 The fundamental physical quantities calculated by the GCM include Temperature (T), Pressure (P), Winds (East-West = U, North-South = V), and the Specific Humidity (Q). Differential equations are used to relate these fundamental quantities to each other. Though these equations may look quite complex and difficult to understand, they are common math that scientists learn during college.
The number of cells in the grid system is known as the "resolution." The more grid cells, the higher the resolution, and the more calculations that must be computed. In general, GCMs are able to represent processes more realistically as they become higher resolution, but the computing time required to do the calculations goes up roughly 10X for every doubling of the resolution. EdGCM uses a GCM with a coarse grid resolution (8° x 10° latitude x longitude) in order to reduce the numbers of calculations and make it possible for the GCM to run on desktop and laptop computers. Pictured are some common grid resolutions for the NASA climate models and the decade during which supercomputers could run GCMs with that resolution. 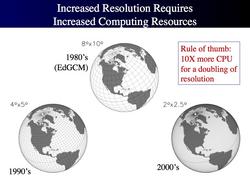 GCMs are computer programs, often hundreds of thousands of lines of code, mostly written in Fortran and strung together by Unix scripts. They generally require a high level of programming skills to operate. However, EdGCM adds a graphical user interface, a database, and some simple structures that allow non-programmers to do many of the experiments with a GCM that programmers and scientists do in their research. 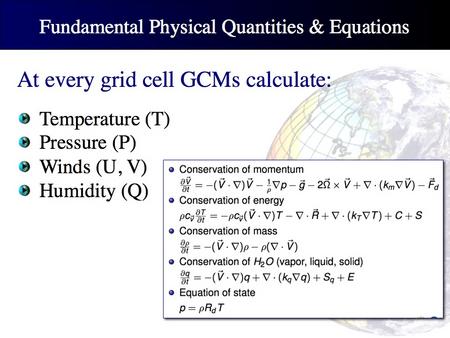 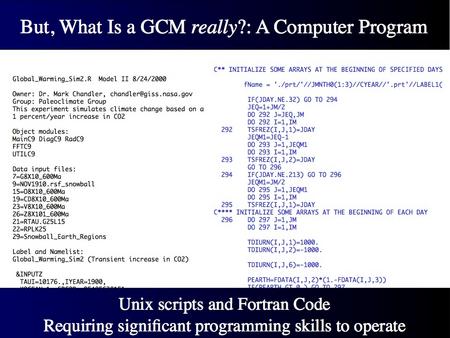 How are the Variables Chosen for Climate Models?

Climate simulations are based on a set of variables that are the result of complex predictions known as scenarios. In this exercise we are using the greenhouse gas predictions from the IPCC emissions scenario A1 - Fossil Intensive (FI). This scenario, explained below, was chosen for this exercise because it is the most realistic course for the development of world economies and populations.

From the IPCC special report on emissions scenarios:

The A1 storyline and scenario family describes a future world of very rapid economic growth, global population that peaks in mid-century and declines thereafter, and the rapid introduction of new and more efficient technologies. Major underlying themes are convergence among regions, capacity building and increased cultural and social interactions, with a substantial reduction in regional differences in per capita income.

Show me more about scenarios

A scenario is an image of a potential future that is based on historical knowledge and assumptions of future change. The IPCC scenarios are based on a clear logic and a data-driven storyline (or narrative) of what events have occurred in the past and how the future may unfold.

There are four most commonly used scenarios. They are labeled A1, A2, B1 and B2. The scenarios describe the relationships between the forces driving greenhouse gas and aerosol emissions and their potential future change during the 21st century for large world regions and globally. Each storyline, and related scenario, represents a different projection of a set of influential factors including: demographic and social change, economic growth, technological innovation, and environmental developments, such as land-use change. These emission scenarios are subsequently used as input into climate models.


An in-depth explanation of IPCC emission scenarios can be accessed by clicking this link.

How is Climate Modeling Implemented?

Modeling is using preset differential mathematical equations to represent the forces that control a situation, in this case climate. By changing variables in the equation one can envision a future outcome. As in other scientific investigations, climate experiments, or model runs, are generally compared to control runs. Control runs use known conditions for the oceans and atmosphere. These are characteristic conditions from the years 1951 -1980. This time period is chosen because 1958 was the first year that greenhouse gases were measured. At that point, in 1958, the greenhouse gas CO2 were at a concentration of 315 parts per million (ppm) already 10% above pre-industrial values. The Modern Predicted Sea Surface Temperature (SST) run serves as a control run for this unit. This simulation has constant forcings, which make it easiest to predict. If the run results of this simulation were to exhibit large changes over time it would indicate problems with the model's output.

The complete EdGCM manual (Acrobat (PDF) PRIVATE FILE 7.2MB Aug15 09) is available to download in PDF. The manual has detailed instructions for users of the software, including information on how fast the software will run on various computers. Climate models are complex and take large amounts of computing time to complete. Teachers who are unsure of their computer's technical capability should check with their IT department for information.