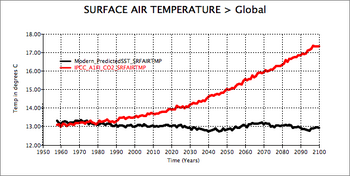 EdGCM computer software is capable of producing both map-based and graphical outputs. The graph of the right is a graphical output of temperature change over time comparing a baseline and modeled output.

This chapter is appropriate for students in grades 9-16.

What are the big ideas and enduring understandings of this unit?

What are the essential questions needed to lead to this understanding?

Global climate models are one of the primary tools used today in climate research. Because of the computer computational requirements these models were originally developed and housed at national laboratories run by the government science agencies. NASA's climate modeling lab, the Goddard Institute for Space Studies (GISS), is located at Columbia University in New York City (this is also where EdGCM was developed). NOAA's lab, the Geophysical Fluid Dynamics Laboratory, is located in Princeton, New Jersey, while NSF funds the National Center for Atmospheric Research (NCAR) in Boulder, Colorado.
As a result of their complexity, these models are not well understood by the general public. This EET chapter strives to give teachers and students the opportunity to more fully understand the process and potential of climate modeling through a hands-on interaction with an educational version of climate modeling software. This educational version of the software differs from the original climate modeling software only in that it is designed to run on school computers, which are generally smaller and have less computing power than the supercomputers used by national labs.

Basic information about the climate modeling and EdGCM written for teachers by the EdGCM team is available at EdGCM website. Part 1 of this chapter includes an introduction to climate modeling.

Some additional science articles on climate modeling that may also be of interest are listed below. Keep in mind these articles range in depth and difficulty. Please keep the age and ability of your students in mind when assigning reading. These resources may also be used for classroom presentation.

Show me the glossary

Students will gain more from this exercise if they already have a basic working knowledge of climate and the factors that control it such as: elevation, latitude, the Earth's orbit, seasons, temperature and precipitation. This unit can be used as a stand-alone unit or embedded in a larger unit on climate change. Ideally, students should also know basic information on greenhouse gases, the IPCC reports and scenarios, and the issues surrounding climate change impacts. This background information can be found online at IPCC home or in most environmental science texts. A helpful, although somewhat technical, summary document from the ARWG 4 report is the frequently asked questions page. Other helpful background documents on climate modeling can be found in the reference links above. Listed below are four excellent sources of information on climate change.

Students begin this lesson by examining decreasing snow and ice coverage. Using this case study as the initial introduction to the technical skills needed to use EdGCM, students can use EdGCM to investigate other subjects and questions of their own design. Students can use EdGCM to investigate the impacts of climate change on temperature, precipitation, snow and ice coverage. Students will relate global processes to changes that affect them at a local level. The contexts or subject areas that this lesson is suited for are broad. The outcome of the discussions will be guided by the parameters set by the individual instructor. The outcome could be, social, environmental or economic. This lesson is suitable for environmental science, world politics, geography, or earth science classes.

Groupings
As this lesson is outlined, students begin as a large class for part 1, move to individual or paired grouping for parts 2-5 and then form small "research" teams for part 6. The final class period should be a large group discussion of the research team findings and a comparison of the students' observations with those of the IPCC global impact reports.

Teachers can adapt these assessment suggestions to their own classroom situation.

Estimated times for completing the Case Study and each Part of the chapter. Total time 3-6, 45-minute periods will be needed to complete the case study and exercises.
Running the climate model is a time consuming step, taking anywhere from 12 to 24 hours per simulation. It is suggested that teachers begin the program well (several days) in advance of using it with classes. As an alternative to running the model, it is possible to directly download the output file. Instructions for this shortcut are listed at the bottom of the page in Part 1.

Part 1-(1-24 hours, depending on connection) Download software, run simulation or download the output files for the 2 model runs; IPCC A1FI CO2 and Modern_PredictedSST

Part 3-(45-90 minutes) Engage – Generate and Analyze a Time Series graph of temperature.
How dramatically will the Earth's surface temperature rise in the next century? What exactly is a model? How do climate change models work? What goes into the programming of a climate model?

Part 4-(50 minutes) Explore – Generate maps of surface air temperature using EVA.
Use Analyze Output in EdGCM to generate data sets that can be mapped. Then use EVA to create several maps of temperature and snow and ice coverage under both global warming and non-global warming scenarios. Discuss why averaging is important.

Part 5-(50 minutes) Examine – How will climate change impact winter snow and ice in the northern hemisphere?
Use EVA to create a difference (anomaly) map of Snow and Ice Coverage.

The following National Science Education Standards are supported by this chapter:
Addtional Standards are referenced in the Manual for EdGCM (Acrobat (PDF) PRIVATE FILE 7.2MB Aug15 09)

Standard 1. How to use maps and other geographic representations, tools, and technologies to acquire, process, and report information from a spatial perspective.

Standard 7. The physical processes that shape the patterns of Earth's surface.

Standard 13. How the forces of cooperation and conflict among people influence the division and control of Earth's surface.

Standard 18. How to apply geography to interpret the present and plan for the future.