Hide
Click and hold on the drop-down menu next to the words Fill Color and select Population (2000). 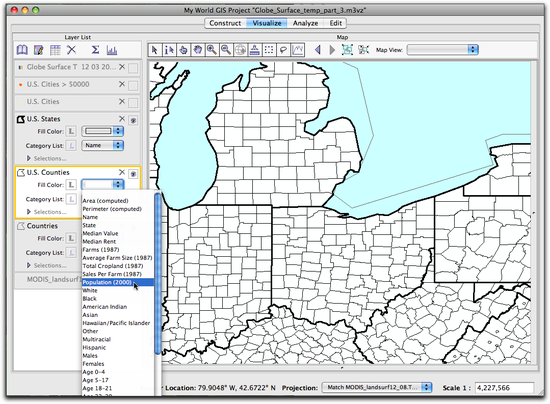 Hide
Cuyahoga has the largest population. 1,393,978 million people lived in Cuyahoga county in the year 2000.

Show me the table 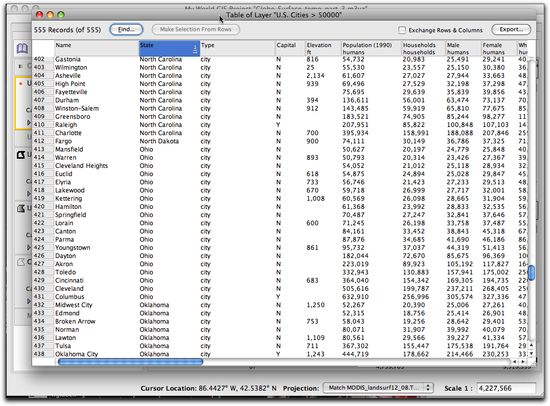 Hide
The larger cities are clustered in the more populous counties.

Hide
In counties with large populations, there are greater amounts of man-made surfaces, such as parking lots and buildings. Dense urban areas generally lack parks and trees, as well as open and vegetated space. Both of these factors can contribute to increases in surface temperature.

While exploring, consider the following questions:

Show me the dialog box 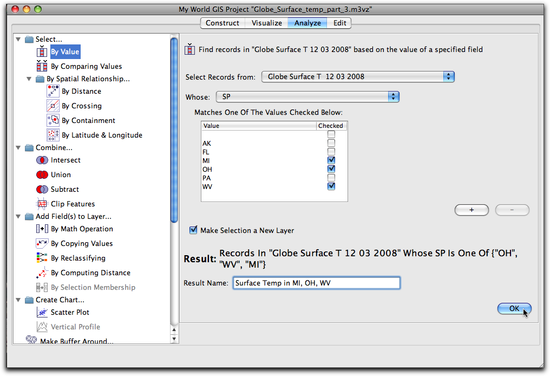 GLOBE surface temperature data can be submitted for a variety of surface cover types including short and tall grass, barren land, shrubs, dwarf shrubs, concrete, asphalt, open water, and other.

Comparing the surface temperatures on asphalt to grass would be like comparing the temperature of black versus white cars on a sunny day. Therefore, to make a scientific comparison it is necessary to limit the comparison to only one surface type that is common at schools: short grass. To do this, you will further subset the data, limiting it to only short grass cover.

Show me other ideas to investigate

Hide
Short grass was the cover type selected here, but this same study could be replicated using other commonly reported surfaces such as concrete or asphalt.

Step 4 – Create a 25-Kilometer Buffer Around U.S. Cities With a Population Greater Than 50,000

Imagine you are driving out of a large city and into the countryside. How far from the center of the city do you have to go until the landscape begins to change from urban to rural? Is this answer the same for every city? What data or imagery could help you identify that boundary? Aerial or satellite imagery could provide answers on the use of land. Both NASA and the USGS maintain the LANDSAT satellites that measure land use. Since there is no perfect answer for this distance, you will start by creating a 25-kilometer boundary, or buffer, around each of the selected cities with populations over 50,000.

Show me the dialog box 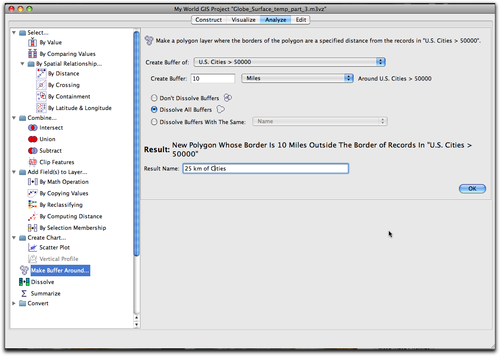 Show me some of the options

Hide
The urban heat island effect is theorized to affect large cities that have converted a significant percentage of the natural vegetative cover to roads, parking lots, or buildings. Do you think there is a specific population level that is the definitive tipping point between cities that are affected by urban heat islands and those that are not? What population value would you choose? In what ways could even large cities combat excessive heat build-up through their planning or projects?


The EPA uses a population of 1 million in their examples for large cities and 50,000 was used as a starting point here. However, this study could be completed using various population levels. Urban heat island severity depends greatly on the amount of natural space preserved in an area, the use of green or living roofs, the use of concrete instead of asphalt for roads, as well as other factors which reduce the amount of absorbed energy.


If you had trouble with any of the steps of this part, such as sub-setting the GLOBE surface temperature data, limiting the cover to short grass, or creating the 25 kilometer buffer around the cities or if you simply need a fresh project file with all the data for the next part of the chapter, then use this project file. This file has been saved with all of the steps though the end of Part 4 completed.
Urban_Heat_Island_Part4.m3vz ( PRIVATE FILE 3.5MB Jun2 10)
Right-click (PC) or control-click (Mac) the link above to download the file.