The lab activity described here was created by Betsy Youngman of TERC for the EarthLabs project.

Students use graphics, NASA animations, and a variety of diagrams of weather and climate patterns to explore the physical factors that influence climate (latitude, altitude, proximity to water). They also learn about the three levels of drivers that create weather and climate at various spatial scales (Global, Regional, and Local). 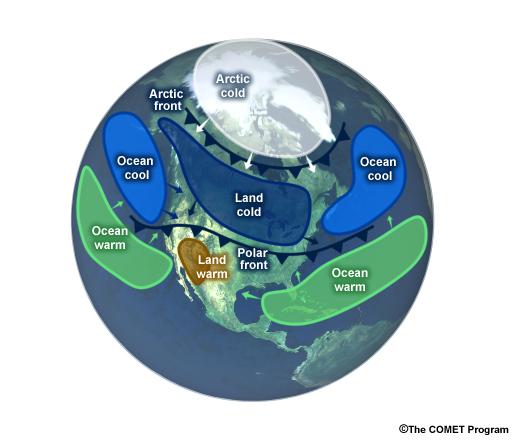 In Part A: Using a variety of computer-based animations and visualizations, students study the planetary, or global, circulation patterns of the atmosphere and the ocean. Students get a sense of the large-scale motions that help to redistribute the surplus of solar energy in the Equatorial regions to the cooler Polar regions of the planet. This lab requires a computer with Internet connection.
Time required: 40 minutes

In Part B: Students switch focus to the synoptic, or regional level, to learn about the six factors that contribute to continental-scale weather events. Demonstration "mini-labs" are included to demonstrate these concepts. To save time, the reading can be assigned as homework. This lab can be completed offline, and is designed to be a stations-type, expert teams lesson.
Time required: 50-60 minutes

In Part C: Students zoom in one more time to study weather data at the local level, reviewing a variety of charts, maps, and graphs that document weather at the meso- and micro- scales. This lab requires a live Internet connection.
Time required: 50 minutes

Time required: 150 minutes or 3-4 class periods are needed to complete these labs. (Part A can be done as homework.)

Hide
General Recommendations: A good place to start the conversation about weather and climate is at the local level. Ask students for their recollections of weather events and get them thinking about the forces that influenced that local event. Even a simple thought question, such as: "Where do the clouds come from and travel to?", will help students to expand their thinking about something so obvious as the daily weather that we often forget about it.

Teachers may want to post, share and discuss the following image (or parts of it) as a way to organize thinking about weather and climate. By relating the terms of time and space with weather and other events in the Earth system, students can begin to grasp the complexity of the system. Click on image for larger view.

In Part A: The primary drivers of climate are the impacts of: incoming solar radiation, atmospheric composition, Earth's revolution and rotation, and the character of Earth's surface. At the global level, weather and climate are shaped in large part by the uneven heating of Earth's spherical shape (significantly more solar energy arriving at the equator than at the poles). Since the atmosphere and the oceans are fluids, they move (via convection currents) as they redistribute heat from warmer to cooler locations. In the atmosphere, this motion creates wind, which moves atmospheric moisture as well as heat. The fact that this whole dynamic system also spins and is made quite irregular by the random distribution of continents on the sphere adds to the complexity, but ultimately it's not that difficult to make sense of the resulting large-scale general circulation patterns of the atmosphere and the ocean.

Before beginning Part A, print and distribute the Wind and weather timescales organizing document, and the world climates global map. (Both are linked above)

Then, continue the discussion by talking about Global patterns of weather and climate, such as wind patterns. Use the animation GEOS clouds - modeled on the Blue Marble image. Note: you may need to watch the video several times to see all the details. Pause after the video and conduct a discussion, described below.

Hide
Purpose of the discussion: In a previous lab, 2A, students completed a hands-on lab exploring how the sun drives the water cycle. This video animation of modeled data takes the idea to a global scale. Students should look for patterns in the water vapor trails.

Facilitation Tips (Optional): Write the primary discussion questions on the board and give students three to five minutes to write and draw in their notebooks, then have students share with a partner before starting the full class discussion.

Primary discussion question: From what you discovered in the water cycle lab (Lab 2A), describe what you think is causing the clouds to form. Recall a cloudy and breezy afternoon; how do clouds allow us to "see" the movement of the atmosphere? Discuss memorable cloud patterns with your neighbor.

Supporting/Follow-up questions: To help jump-start the students thinking, or to further probe their knowledge, use the following questions:

Wrap Up: Finish the discussion by explaining that you will revisit this discussion question again at the end of the lab, after students have explored the materials and information in the lab. Encourage them to become cloud watchers.

In Parts B and C: Regional and local climate patterns (synoptic-scale) can be more "messy"; they are influenced by a combination of global and more local conditions. These drivers include the movement of air masses and related warm and cold fronts; mountain ranges; proximity to the ocean; and other local influences. The regional and local climate drivers occur over much shorter time frames than the global circulation patterns. For example, some types of storms can sweep through an area in a matter of minutes. In contrast, it can take well over a thousand years for a water molecule in an ocean current to complete its cycle through the great ocean conveyor belt, before starting over again.

Part B: Print and distribute the U.S. Climates map to begin Part B. This lab is set up as a stations-type activity and can be completed offline, (although some of the interactive features will be lost). Teachers will need to set up six demonstration stations for prior to the lab. Place the materials needed for each lab in a tub or box, along with a printed copy of the station's instruction document. Divide the class into six teams and assign each lab team one station to prepare, practice, and present to the class. Allow 20-30 minutes for practice time at the stations. Once all teams have prepared their demonstrations, have them present their demonstration and weather concept to the rest of the class.

The lab concludes with students downloading, reading, and interpreting the climatology for their own state. Teachers should guide students to skim the report while looking for, and possibly highlighting (or taking notes on), key words that they have learned in this lab. A sample report, with highlights, is attached below. The goal is for students to see which weather patterns consistently impact their own state and to get a feel for how the terminology that they have learned throughout Lab 3 can be applied.
Mississippi climatology - highlighted (Acrobat (PDF) 65kB Dec10 12) source: NCDC


Part C: Parts of this lab can be completed offline, (although some of the interactive features will be lost). The lab starts with a discussion of weather versus climate using sentence strips. Students can either use the online climate and weather interactive activity, or teachers can print out and distribute sets of sentence strips to lab teams. The sentence strips are linked above (as a word document).

In the second part of the activity, Track a storm system, teachers can choose to have their class work on or offline, in small groups, or as a whole class. The weather tracking activity (in PDF) is linked above.

In the last part of Lab 3C, students use NOAA's National Climatic Data Center (NCDC) to look at the weather patterns in a location of their choice over the course of a series of years—from 1 year up to 120 years. In order to make this an offline activity, teachers can download and print graphs and charts of daily weather. As an alternative, students can research the weather in a town other than the one described in the instructions. For example, students could research their local town or one that they are interested in knowing more about. The idea is to give students a sense of the variability of local weather and how, with enough years of data, a sense of climate emerges.

Suggestions for how to use Student Notebooks for Lab 3.

Hide
The complex patterns of the changes and the movement of water in the atmosphere, determined by winds, landforms, and ocean temperatures and currents, are major determinants of local weather patterns. (MS-ESS2-5)

Hide
Weather and climate are influenced by interactions involving sunlight, the ocean, the atmosphere, ice, landforms, and living things. These interactions vary with latitude, altitude, and local and regional geography, all of which can affect oceanic and atmospheric flow patterns. (MS-ESS2-6)

Hide
The ocean exerts a major influence on weather and climate by absorbing energy from the sun, releasing it over time, and globally redistributing it through ocean currents. (MS-ESS2-6)

HS ESS 2 D.1. The foundation for Earth's global climate is the electromagnetic radiation...

Hide
The foundation for Earth's global climate system is the electromagnetic radiation from the sun, as well as its reflection, absorption, storage, and redistribution among the atmosphere, ocean, and land systems, and this energy's re-radiation into space. (HS-ESS2-4)


Science and Engineering Practices:
2. Developing and Using Models
3. Planning and Carrying Out Investigations
4. Analyzing and Interpreting Data
7. Engaging in Argument From Evidence 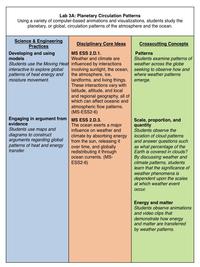 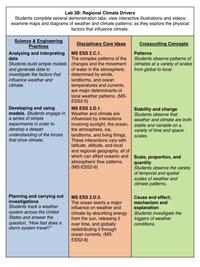 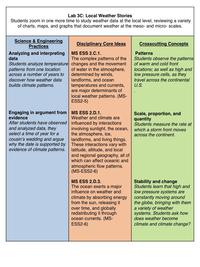 Provenance: Betsy Youngman, none
Reuse: This item is offered under a Creative Commons Attribution-NonCommercial-ShareAlike license http://creativecommons.org/licenses/by-nc-sa/3.0/ You may reuse this item for non-commercial purposes as long as you provide attribution and offer any derivative works under a similar license.
Go to Next Generation Science Standards.

Have students research the weather in a town other than the one described here. For example, students could research their local town or one that they are interested in. Another approach would be to have a class of students research the weather in one town but over a series of days, months, or years. The idea is to give students a sense of the rapid variability of local weather. Alternately, keep a class calendar or log of weather events throughout the time you are working on this unit.