Resources in this top level collection a) must have scored Exemplary or Very Good in all five review categories, and must also rate as â€œExemplaryâ€ in at least three of the five categories. The five categories included in the peer review process are

Lab 6: Future of the Cryosphere

The lab activity described here was developed by Erin Bardar and Sarah Hill of TERC and Betsy Youngman for the EarthLabs project.

In this culminating activity, students will contemplate what the future might hold for climate and the cryosphere. In the first part of the lab, they will learn about what climate models predict Earth's climate will be like in the future. In Part B, they will consider potential changes in sea level that might be brought about by warming temperatures and melting ice. 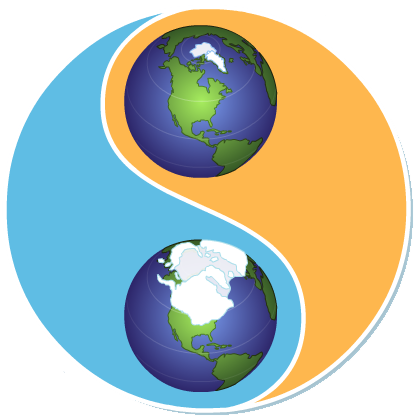 ×
Comparison of hothouse and icehouse Earth extremes. What does the future hold for climate and the cryosphere?

Provenance: Image created for the EarthLabs project by Lenni Armstrong, Informmotion
Reuse: If you wish to use this item outside this site in ways that exceed fair use (see http://fairuse.stanford.edu/) you must seek permission from its creator.

In Part A: Students first learn about climate models that scientists use to simulate various climate scenarios. They are also introduced to pathway scenarios (SSP-RCP) developed by the United Nations' Intergovernmental Panel on Climate Change. They then take an interactive questionnaire about how individual lifestyle choices play out in a scenario and subsequent climate. After discussing how such lifestyle choices impact global climate, students use the WGI Interactive Atlas tool to explore future climate scenarios for the U.S., focusing on a location that is important or interesting to them. Part A concludes with a class discussion about potential future climate scenarios and how they could impact students' lives.
Time estimate: 50-100 minutes

In Part B: Students predict how massive melting of sea ice and land ice will each contribute to global sea level rise. They then design and construct a model to demonstrate both processes. Provide each small group of students with the following materials:

Watch this video from PBS Learning Media to see a simulation of how the melting of ice shelves and ice sheets affects sea level.

After completing their models, students interpret sea level rise data and use the online interactive Surging Seas to explore threats from sea level rise and storm surge to all 3,000+ coastal towns, cities, counties and states in the continental U.S. Students will choose a location of interest to study in detail and prepare a short report to share with the class.
Time estimate: 50-100 minutes

Hide
Right-click (Win) or control-click (Mac) the linked text below and choose File > Save As... to save files to your computer.

In Part A:: Prepare yourself to facilitate discussions about climate predictions and consequences.

Purpose of the discussion: This discussion is meant to get students thinking about how the choices we make as individuals can can add up to create large-scale change.

Facilitation Tips: Write the primary discussion questions on the board and give the students time, in small groups of 3-5 students, to brainstorm and recall events they may have heard about in their own area. If you suspect that they may have difficulty identifying local events, either discuss the examples here, or ask students to research events with their families or other resources as homework and then continue the discussion a second day.

Primary discussion questions: How do individual lifestyle choices influence global climate change? Can one person really make a difference? Brainstorm and share ideas for changes in your lifestyle that you and your classmates and families can make.

Wrap Up: Suggest that students try making one or two of the changes they came up with in their brainstorming for a few weeks or months to see if they can observe any impact on things like their home heating or electric bills.

Purpose of the discussion: This discussion is meant to get students thinking about the future and how their lives will be impacted by climate change.

Facilitation Tips: Write the primary discussion questions on the board and give the students time, in small groups of 3-5 students, to brainstorm and recall events they may have heard about in their own area. If you suspect that they may have difficulty identifying local events, either discuss the examples here, or ask students to research events with their families or other resources as homework and then continue the discussion a second day.

Wrap Up: As you wrap up the discussion, bring students back to thinking about the cryosphere and how the predicted changes they observed for their local region would impact snow and ice.

In Part B: Consider assigning specific locations for small groups of students to explore with the Surging Seas interactive.

Suggestions for how to use Student Notebooks for Lab 6.

Cross-Cutting Concepts
2. Cause and effect
4. Systems and system models
7. Stability and change 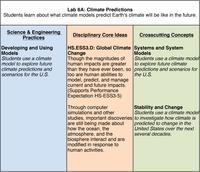 Provenance: Content from NGSS (http://www.nextgenscience.org/next-generation-science-standards)
Reuse: This item is offered under a Creative Commons Attribution-NonCommercial-ShareAlike license http://creativecommons.org/licenses/by-nc-sa/3.0/ You may reuse this item for non-commercial purposes as long as you provide attribution and offer any derivative works under a similar license. 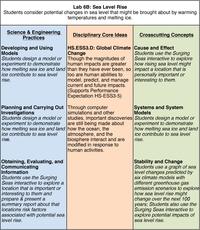 Provenance: Content from NGSS (http://www.nextgenscience.org/next-generation-science-standards)
Reuse: This item is offered under a Creative Commons Attribution-NonCommercial-ShareAlike license http://creativecommons.org/licenses/by-nc-sa/3.0/ You may reuse this item for non-commercial purposes as long as you provide attribution and offer any derivative works under a similar license.
Go to Next Generation Science Standards (NGSS)