American Indian students in Oklahoma are quite aware of the unprecedented increase in earthquakes in the state, where the rate of magnitude 3 and greater earthquakes has recently been as high as 300 times what it was prior to 2008 (Rubinstein and Mahani, 2015). This increase in seismicity has led the USGS to show, through a new seismic hazard map that includes induced seismicity, that the short-term earthquake hazard in parts of Oklahoma now equals the hazard in California (Petersen et al., 2016). Understanding the relationship of these earthquakes to energy industry practices, and the resulting implications for energy production and energy-related jobs in Oklahoma, is an important issue for all Oklahoma residents, but especially American Indians in the region, given their close association with the land and their sovereign control of natural resources and land use within their reservation boundaries. Despite a strong community focus on stewardship and protection of the natural environment, American Indians are poorly represented in the geosciences (Riggs et al., 2007), perhaps due in part to the cultural disconnect between the process of western science research and education and traditional knowledge (Semken, 2005).

The Oklahoma Tribal Nations Regional Alliance seeks to address the human-induced earthquake hazard faced by Oklahoma tribes and its relationship to job opportunities, ground water contamination, and related issues. A community listening meeting was held in March in Norman, OK, where 21 leaders in Native American education in Oklahoma identified high priority community issues and how they intersect with the geosciences. They also considered critical stages of the pathway from middle school to tribal college to university, including after school and informal learning experiences, where the potential for geoscience integration into STEM learning exists. Participants at the meeting developed an initial asset list and pathway map and agreed to participate in three informal working groups to continue the pathway planning.

On July 28th, Dr. Neely updated attendees at the 2017 Indian Education Summit on the Earth Connections Oklahoma Regional Alliance Project. At the Summit, plans for the next meeting were announced and several educators indicated they would like to join the Planning Committee. The Oklahoma Tribal Nations Regional Alliance now has 29 members, representing 11 organizations and 8 tribes.

The regional alliance has a very good cross section of Native American leaders and the involvement of the Oklahoma Geological Survey through Dr. Jake Walter, the state seismologist. Given our focus on increased seismicity, the support and interest of Dr. Walter is very important. We plan to add a few other key regional stakeholders such as industry and stage agency representatives in the fall, but are trying to remain focused on a small manageable partnership at the outset.

An October meeting held at the American Indian Institute included representatives from five tribes as well as several other key potential partners:

Use geoscience to address a local need or problem

Despite a strong community focus on stewardship and protection of the natural environment, American Indians are poorly represented in the geosciences (Riggs et al., 2007). Understanding the relationship between increased numbers of earthquakes and energy industry practices, and the resulting implications for energy production and energy-related jobs in Oklahoma, is an important issue for all Oklahoma residents. It is an especially important to American Indians in the region, given their close association with the land and their sovereign control of natural resources and land use within their reservation boundaries.

In partnering with the Oklahoma Geological survey, the Oklahoma alliance is hoping to leverage earthquake awareness initiatives. Through independent funding, the OGS is planning to deploy 100 low-cost seismographs in public locations across the state (museums, libraries, schools), both to raise awareness of earthquake hazards, and to provide additional data for locating and analyzing earthquakes. They are also planning a significant professional development program to accompany the sensors, and will be making use of various IRIS educational resources as part of that PD.

The following pathway maps show some of the existing local and national resources that may be connected with existing Native American assets programs to create a pathway for students to follow from K-12 through to a potential geoscience career. The spiral pathway map replaces the original pathway map, and reflects an evolution from a general set of assets to focus on specific assets that support unique pathways. 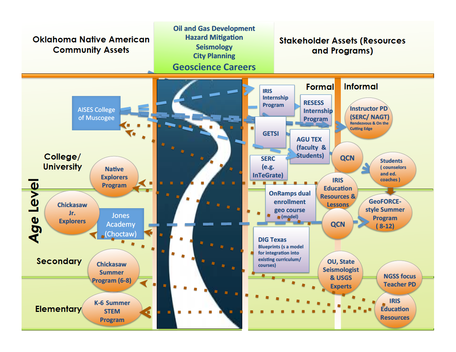 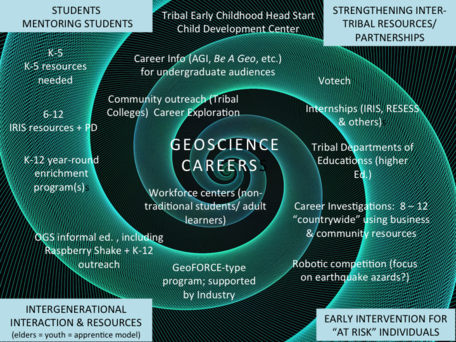 One of the goals of the pathway map was to find places to bridge between existing projects and activities. To that end, Dr. Norma Neely, Director of the American Indian Institute teamed up with Dr. Jake Walter, Oklahoma's State Seismologist to present earthquake related activities to the Jones' Academy 2-week STEM Camp for students entering grades 9-12 as a mechanism for exploring pathway elements and a presentation at the Indian Education Summit as an opportunity to build interest and membership in the alliance. Twenty students attended the presentation. The Jones Academy, a Bureau of Indian Education school founded by the Choctaw Nation, is recognized for academic achievement in mathematics. The Jones Academy hosts a summer STEM camp for high school students from 29 tribes. Admission is competitive.

Jones Academy students indicated they gained new information on earthquakes, hydraulic fracturing, ground water issues, and types of seismic waves from the presentations. They especially enjoyed the hands-on activities, the videos, and the data analysis using computers. As part of the collaboration between the Oklahoma Geological Survey and neighborhood schools, libraries, and informal science sites, the OGS will also be placing low cost seismographs at these venues throughout the state.

The proposed pathway maps (above) shows both Native American and other stakeholders' assets, all of which may be "stops" along an educational path that leads to a geoscience career. Feedback and input are needed from Oklahoma tribal leaders in order to select the types of learning activities and programs that are a good fit for the Native American students along the "Oklahoma Pathway". Efforts to strengthen the partnership with the Oklahoma Geological survey, which already supports earthquake awareness and geoscience education initiatives, hold tremendous promise for the Oklahoma EC Alliance.