Why are feedback loops difficult to teach and learn?

In my last post, Tim Shipley and I wrote about the explanatory power of feedback loops, using examples from pandemics, climate change, escalation of hostilities, and explosions. In this post, I will share some thoughts about why feedback loop concepts can be so hard to teach and learn.

As a reminder, the term "feedback loop" refers to a situation where some phenomenon, let's call it "A," causes or influences another phenomenon, let's call it "B," and then "B" in turn cycles back and causes or influences A, sometimes through intermediate steps (C, D, E, etc.). In a "positive" or "reinforcing" feedback loop, the series of causal links that make up the loop serve to amplify any initial impetus. In a "negative" or "balancing" feedback loop, an initial impetus applied to A is reversed by passage around the loop.

Given the strong explanatory power of the feedback loop concept across so many disciplines, it seems surprising at first glance that it is not more widely taught. When I and my colleagues asked 164 undergraduates at a major university about their familiarity with feedback loops prior to beginning our study, one third selected "I don't recall ever hearing the term before." Only 15% chose "The concept was extensively covered in a course I took." On the 2016 National Association of Geoscience Teachers, fewer than 30% of survey respondents indicated that they have students in their course for majors analyze feedback loops (Egger, 2018, her figure 3).

On second glance, there are quite a few potential stumbling blocks to successful teaching about feedback loops. Feedback loops challenge the English language, the human cognitive system and the U.S. education system in many ways. This post lays out ideas about why feedback loops might be hard: watch this space for elaboration of some of these ideas in future posts.

My first thought on this topic, expressed in a blog post back in 2010, was that the terminology is sowing confusion. In ordinary English usage, "positive feedback" means praise and "negative feedback" means criticism. That post contained amusing examples from various domains of narratives and diagrams where "negative feedback loop" was used to describe a situation with an unhappy ending or undesirable outcome--even though a system dynamicist or geoscientist would have described the situation as a positive feedback loop. This post seems to have hit a nerve, as "Going Negative on 'Negative Feedback' " was the most-visited Earth & Mind post of all time. My colleagues and I are now testing this hypothesis, and our preliminary result, presented at the 2020 Earth Educators' Rendezvous, is that undergraduates are indeed biased towards identifying a narrative as a "positive feedback" loop if that narrative has a desirable outcome. Unfortunately, switching to the term "reinforcing feedback loop" doesn't cure this problem.

Systems containing feedback loops don't look similar to each other:

Lack of an obvious disciplinary home:

Although the feedback loop concept has broad explanatory power, for any given instructor the cost/benefit ratio of teaching about feedback loops on the way to explaining this week's disciplinary topic may seem unfavorable. If students are already conversant with feedback loops, then it could be effective and efficient to use this concept to teach about pandemic spread, or landslides, or onset of war, or marketing via social media, or many other topics. But if there are few students in a class who already are conversant with feedback loops, the instructor may not find it worthwhile to detour through an introductory lesson on feedback loops on the way to teaching their disciplinary content. In any given college class, there are likely to be many students who have zero or minimal grasp of the concept. Where should they have learned it? There is no obvious course where everyone should have already learned about feedback loops before they come to your course. 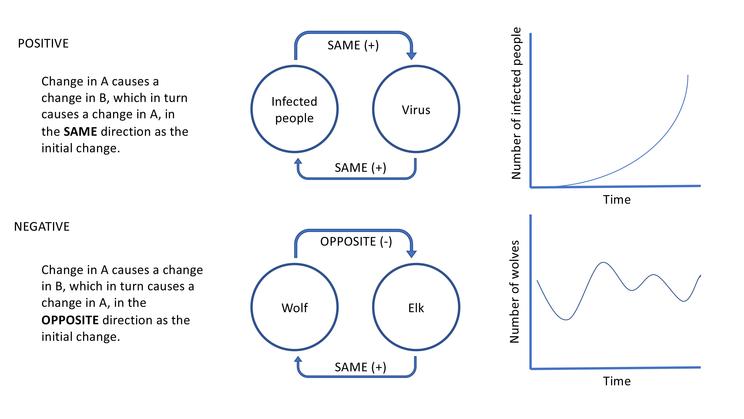 Provenance: My collaborator Tim Shipley of Temple University made this figure and gave permission for its use on Earth & Mind.
Reuse: This item is offered under a Creative Commons Attribution-NonCommercial-ShareAlike license http://creativecommons.org/licenses/by-nc-sa/3.0/ You may reuse this item for non-commercial purposes as long as you provide attribution and offer any derivative works under a similar license.
Two different types of visualizations are commonly used to understand and communicate about feedback loops.  Nodes and arrows diagrams depict the structure of the feedback system, highlighting causal relationships between components.  Time series graphs depict the behavior of one or more key components of the system as a function of elapsed time.

Understanding two visualizations is harder than understanding one. And it's not sufficient for learners to decipher each visualization by itself; they must also get a handle on the relationships between the two visualizations.  How could this structure in the nodes and arrows diagram give rise to this behavior in the time series graph?  Conversely, if we see characteristic behaviors in a time series graph, how can we use that information to inform  hypotheses about what is driving or controlling the system?

Time goes forward unidirectionally, and causality is linked to time:

A lifetime of experience has taught humans to expect that time advances unidirectionally. The past flows into the present, which gives way to the future. Temporal relations take the form A is followed by B is followed by C.    Except in science fiction, time doesn't loop back from a later event to a prior event.

But our lifetime of experience has also taught us that time and causality are tightly coupled.  If A happened before B, then we can be certain that A could have caused or influenced B, but B could not have caused or influenced A.  Because people know from experience that time cannot loop around on itself, and that time and causality are tightly coupled, Stillings (2012) suggested that grasping that chains of causality can loop requires a reorganization of fundamental notions of cause.

Need to keep track simultaneously of instances and category:

Barbara Tversky and her students conducted a relevant series of experiments on how people visualize a series of events that are either a temporal sequence or a cycle that repeats in time.  A temporal sequence example: "Break eggs in bowl. Add milk. Stir. Cook in frying pan."   A cycle example:  "Wake up. Go to work. Come home. Go to sleep."  After reading one of these mini-narratives, participants were  asked to either sketch a diagram to convey the presented information or chose which of two diagrams better conveyed the information.

For the temporal sequences, the overwhelming majority of the participants drew or selected an "end" diagram, in which a series of 4 nodes were connected by lines or arrows in a linear array with a clear beginning and end.  Unexpectedly,  most participants also drew or selected "end" diagrams for the temporal cycles.  Only a minority of drawings or selections were of  "repeat" diagrams, in which the last-stated event circles back around and connects up with the first-stated event.

In interpreting their findings, Tversky and colleagues pointed out that in order to visualize the stated events as a repeating cycle, a participant had to simultaneously keep track of both instances and category. Waking up this morning is like waking up yesterday, and yet it is also different, a unique day. Holding both the event category and multiple event instances in mind simultaneously is more cognitively demanding than envisioning each event as a unique instance. Tversky's cycles were not feedback loops because they depicted  "A is followed by B," rather than "A causes or influences B." But the cognitive challenge that Tversky points out pertains to feedback loops as well.

Expectation that observed changes of direction result from exogenous forces

Richardson (2011) makes the case that the central brilliant insight of systems dynamics is that systems dynamicists think about the endogenous aspects of systems, in other words, how the elements within a system influence each other.  This contrasts with exogenous thinking, in which changes in behavior are associated with forces or factors coming from outside the system. Richardson doesn't say this, but I think that people incline towards exogenous explanations, because exogenous forces tend to be visible and conspicuous. In the absence of an exogenous influence, we expect things to keep going as they were. When a soccer ball is kicked, we expect it to travel on a set trajectory, unless deflected by the exogenous force of the goalie's hand.  Having grown accustomed to associating changes in direction with exogenous forces, when a person sees a change in behavior of a system, the explanations that come first to mind tend to be exogenous.  Discerning feedback loops often requires looking beyond obvious exogenous forces to hidden endogenous forces.

Perhaps it is not so surprising that students struggle with the feedback loop concept. It took the cumulative effort of some of humanity's best minds centuries to fully develop and articulate the concept, as recounted by Richardson (1991). The ancient Greeks built hydraulic control systems that embodied negative feedback loops (Hero of Alexandria, 60A.D), but it took until the mid-20thcentury for scientists to recognize the general causal structures that apply to a wide range of social and natural systems.

Comment? Start the discussion about Why are feedback loops difficult to teach and learn?

What do COVID-19, climate change, feuds and explosions have in common? »