The front cover of the current issue of The Economist documents the power of modern science, celebrating the finding of the Higgs boson as "a giant leap for science." But the back cover of the same issue documents the abject failure of natural history education in America.

The artfully designed full page advertisement foregrounds a crisply-focused hand holding a shiny new iPhone 4S. The user is asking Siri, the iPhone's "intelligent personal assistant" a question: "What does poison oak look like?" A background of shadowy trees communicates the urgency of the question; we are to understand that the owner of the hand/asker of the question really needs the answer right now to avoid embarrassment or a painful rash or both.

×
The front and back cover of the July 7-13, 2012 Economist, with the mistaken ID of the poison ivy highlighted

Provenance: I am the creator of the composite image showing the front and back of the Economist cover, with the mistakenly identified plant highlighted. Re-use of the Economist cover is done under fair-use for the purpose of criticism.
Reuse: If you wish to use this item outside this site in ways that exceed fair use (see http://fairuse.stanford.edu/) you must seek permission from its creator.

Siri responds "This might answer your question," and shows a photograph labelled "poison oak." But the photograph in fact shows poison ivy, a different plant found in different locales. Poison ivy has pointy leaves, while poison oak typically has more rounded or lobate leaves.

How could this have happened? Surely dozens of professional eyes scrutinized this advertisement before it was launched out to its expensive and prestigious placement on the back of The Economist. Part of the answer surely is that well-educated young people are not getting much exposure to nature or natural history, either in school or informally. It's their loss, but also the planet's loss. 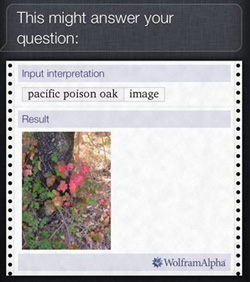 Response to query "What does poison oak look like?" to actual iPhone on 7/14/2012
The mistake seems to have happened in crafting the advertisement, not at the information provider (Wolfram Alpha). We asked an actual Siri in an actual iPhone the same question and she came up with a less photogenic but more accurate photo of poison oak.

I suppose someone must have found this photo unattractive, and a more attractive photograph was substituted. It took me about 5 seconds to find the source of the photo in the ad. It was the sixth return in a Google Image search on "poison ivy."

×
Screen shot of the first row of returns from a google image search for "poison ivy" on 7/15/2012, with the image from the iPod ad circled.

And, lest there be any ambiguity about the identification of the plant in question, it comes from a post on The Tactical Survivor Blog entitled "Poison Ivy: Everyone's bush nightmare, until now!"

I'm actually pretty mediocre at plant ID, mineral ID, face recognition, and all those other object visualization skills. Even so, I find the ability of the human visual system to pick up on subtle differences of shape and texture and identify plants or other objects amid a cluttered field of view to be quite remarkable. All humans have it, but it is a ability that needs to be practiced, calibrated and populated. We're not doing much of that in 21st century education.

The ad in question appeared in the U.S. edition. The magazine's About page notes that advertisements differ from country to country.

Thanks to Dale Chayes for taking the screen shot of Siri's actual response on his new iPhone, and to botanist Dorothy Peteet for confirming my plant ID.

A web search turned up one other mention of the erroneous Siri image, buried deep in a blog post about poison ivy by Larry Krakauer, a retired electrical engineer, who blogs at "Larry's Memoirs and Musings." Good catch, Larry.

I wrote about object visualization and its importance in earth sciences education in: Kastens, K. A. (2010). Commentary: Object and spatial visualization in geosciences. Journal of Geoscience Education, 58(2), 52-57.

The sultry figure in Google image search returns 2 and 7 turns out to be Poison Ivy, a villainness and eco-terrorist in Batman comics and movies, a character with whom I was unfamiliar. Just goes to show that we all have our areas of ignorance. Investigating how "crusad[ing] against the corporate enemies of the environment" got to be something that villains do will have to wait for another blog post.

Of all subjects, poison oak and poison ivy seem to be one of the most misunderstood, with wrong information flying in circles around the internet.
I wrote a book on poison oak/ivy, and have made the chapter on PLANT IDENTIFICATION into a free pdf download on my web site.
You work your way down the system (with drawings) to eliminate impostors. When you get to the end, you will be confident the plant is either poison oak/ivy, or a harmless lookalike. These plants have distinctive botanical qualities that are easily learned.
Sandra Baker www.poisonoakandpoisonivy.com