In which I encounter a "Merchant Of Doubt" 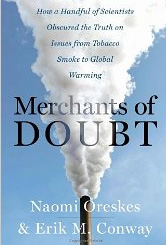 In the course of my work with science and environmental journalism students, I had repeatedly heard of efforts by various people and organizations to stir up doubt about the scientific evidence concerning prominent medical and environmental issues. Thus it was with great interest that I opened a new book, Merchants of Doubt, by Namoi Oreskes and Erik Conway. The book promised to tell me "How a Handful of Scientists Obscured the Truth on Issues from Tobacco Smoke to Climate Warming," with chapters on acid rain, the ozone hole, second hand tobacco smoke, global warming, and DDT.

A short way into the book, my interest took a sharp turn towards the personal. One of the four protagonists of the story turned out to be Dr. William Nierenberg, who had been the Director of Scripps Institution of Oceanography during the years that I studied there for my PhD. Nierenberg starred in two chapters: on acid rain and global climate change.

On the global warming debate, Nierenberg chaired a crucial committee for the National Academy of Sciences, which first convened in 1980 and issued its report in 1983. According to Oreskes and colleagues (Oreskes, et al., 2008; Oreskes &amp; Conway, 2010) Nierenberg downplayed the findings of the physical scientists on the committee, and in writing the high-visibility Synthesis chapter, he ... "reframed the issue as just one of many different changes and challenges facing human society. ...At junctures where an important uncertainty was broached, the synthesis consistently took the most sanguine view: that CO2 use would naturally fall off as future demand for fossil fuel decreased, that deforestation would probably slow down, that weather modification could be made to work, and that the actual increase in mean global temperature for doubling CO2 was likely to be at the low end of earlier estimates...Overall, the synopsis emphasized the positive over the negative, the unknowns over the knowns, the low-end of harmful impact estimates rather than the high-end..." (Oreskes et al, 2008, p. 143-144.)

On the acid rain issue, Nierenberg chaired a peer review panel that was charged by the White House Office of Science and Technology Panel with evaluating the output of technical working groups under the U.S.-Canada bilateral agreement on acid rain. The panel was formed in 1982 and reported in 1984. According to panel members quoted by Oreskes &amp; Coway, Nierenberg changed the Executive Summary of the panel report, after the rest of the panel had approved it and without their knowledge. The revisions were towards a "softer message" (p. 98) than the panel had approved.

Oreskes states clearly that Nierenberg and the other profiled scientists did nothing illegal as far as she knows, nor were they motivated by money. Nierenberg and the others were physicists who had made their reputations in weapons research. Oreskes concluded that "[w]hen the Cold War ended just a few years later, they just couldn't lay down their arms. So they found a new threat in environmentalism, which they worried would lead to excessive government regulation of the marketplace, and put us on the slippery slope to socialism" (from book FAQ).

I have been trying to figure out how to process this information about the leader of the institution which granted me my professional credential. I have come up with three possible ways to think about this:

None of these options is totally satisfying. 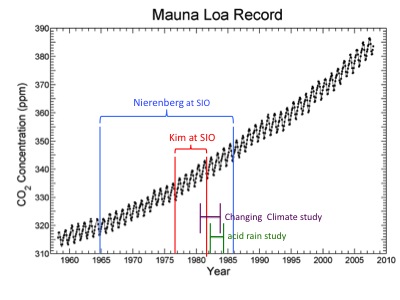 With respect to option 1, I'm thinking not so much in terms of errors of commission but possibly errors of omission--courses not offered, faculty candidates not hired, issues not discussed or not emphasized. Oreskes claims that Nierenberg "hated environmentalists, whom he viewed as Luddites" (Oreskes &amp; Conway, 2010, p. 79). In fact, I can recall very little discussion of human-environment interactions in any of my graduate school courses. At that time, plate tectonics had captured the imagination and attention of the geology faculty at Scripps, crowding out other ideas and issues. At that time, Charles Keeling's atmospheric carbon dioxide measurements at Mauna Loa were sufficiently well advanced that both the secular upward trend and the annual cycle were compelling, but I recall no contact with Keeling as a student.

With respect to option 2, it's discouraging to think that education could be seen as such a minor part of the mission of the organization that the leadership would pay no attention to it, or at least have no impact on it.

With respect to option 3, I thought that Oreskes and Conway made a pretty compelling case. Although the book is being marketed to the public, it is a serious work of well-documented scholarship. Oreskes is a respected historian of science, with an undergraduate degree in geology from Imperial College, a PhD in history of science from Stanford, and current positions as professor of history and provost at UC San Diego. On the other hand, William Nierenberg's son, Nicholas Nierenberg, has a blog and a paper in which he makes the case that "Oreskes got the story wrong" with respect to global warming.

On balance, I incline towards option 2: that the leader of the Institution had no impact on the education program.

As my current institution, Lamont-Doherty Earth Observatory, begins a search for a new director, I wonder: is that way it should be?

Archive of documents related to Merchants of Doubt.

The Resilience Science blog has a video of Naomi Oreskes giving a seminar about her book at the University of Rhode Island in spring of 2010.

In which I encounter a "Merchant Of Doubt" --Discussion

I find it difficult to believe that after reading our paper you think that the authors of the Merchants of Doubt got it right. In addition they got the story fundamentally wrong on Acid Rain. A year before the kerfuffle on the executive summary the OSTP put our a press release where the panel called for immediate cuts in Sulfur output. The final report also unequivocally called for cuts in Sulfur output. While the mess around the final production of the executive summary was unfortunate the fundamental conclusions of the committee had been in the public domain for some time, and my father had been quoted extensively in the press backing this recommendation. The fact that he did this as an appointed chair of a committee under the Reagan Administration was actually extraordinary.

Later in his career, and after his retirement as director, my father did get involved in what is now known as the skeptical movement. But in 1983 he was right in the mainstream.