"Form Follows Function." I've run across this idea a number of times, and it has tickled the spatial thinking part of my attention span. Cups, bowls, bathtubs, and spoons share a fundamental attribute--their concave upwards shape. This shape or "form" follows inevitably from the requirements of holding a liquid in the presence of gravity. Bird wings and airplane wings share a cross-sectional shape, flatter on the bottom and more rounded on the top, to perform the function of lifting the wing as it moves through the air.

I'd always considered "form follows function" to be a poor fit to most objects I care about as a geoscientist. Shape is certainly important in geosciences. For example, geoscientists classify minerals and landforms in part according to their shapes. However, the obvious reason for the shape of geoscience objects is tied up with the objects' formative processes, not their function. Minerals have their distinctive shapes because of the way the atoms are arranged in the crystal lattice. Landforms have their distinctive shapes because of the erosional and/or tectonic processes that formed them.

My attention was drawn back to "form follows function" though a recent Journal Club reading, and the wonders of Google brought me quickly to the original source. It turns out that the guy who originated the catchy phrase did intend "form follows function" to apply to objects of nature. He was an architect, Louis Sullivan, writing about skyscrapers, but he cast his idea more broadly:

"Whether it be the sweeping eagle in his flight or the open apple blossom, the toiling work horse, the blithe swan, the branching oak, the winding stream at its base, the drifting clouds, over all the coursing sun, form ever follows function, and this is the law. Where function does not change form does not change. The granite rocks, the ever brooding hills, remain for ages; the lightning lives, comes into shape, and dies in a twinkling.

It is the pervading law of all things organic, and inorganic, of all things physical and metaphysical, of all things human and all things super-human, of all true manifestations of the head, of the heart, of the soul, that the life is recognizable in its expression, that form ever follows function. This is the law."

"The winding stream," "the drifting clouds," "the granite rocks": Objects of the physical Earth.

Influenced by my recent musings on the structure/behavior/function way of thinking about complex systems, my thoughts turned to the cross-sectional shape of a river bed.

River beds are clearly a case of form follows causative processes. On average, the swiftest flow is in the center of a rivulet or stream or river, the spot least effected by the drag of the sides of the channel. The swiftest flow causes the most erosion. As a rivulet deepens into a stream and then into a river, the concentration of erosion in the middle shapes a concave-upward cross-sectional shape.

Thus there seem to be two simultaneous answers to the question of "Why are river beds concave upwards?": (a) because of how they were formed, and (b) because that shape allows them to most efficiently perform a function in the hydrologic cycle, carrying water. 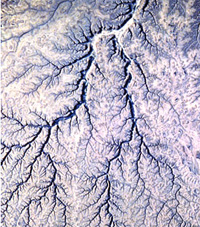 <image info>
The same is true for a river system considered in plan view. The system of tributaries and subtributaries reflects the way that the river system developed--but it also is a highly efficient geometry for draining water off the landscape.

In The Panda's Peculiar Thumb, Stephen Jay Gould wrote of oddball anatomical structures that perform a necessary life function on behalf of the organism but that have unusual shapes because of the evolutionary sequence of events by which they were formed. Examples include the structures that orchids use to attract pollenating insects, and the "thumb" by which pandas strip leaves from bamboo. In other words, for evolved objects it is simultaneously true that form follows function and form follows causative process. 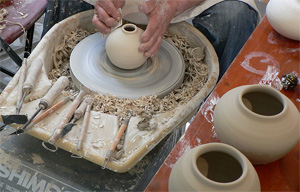 [link http://serc.carleton.edu/details/images/27392.html '']
Returning to the kinds of human-made objects for which "form follows function" is more commonly applied, they also present two possible answers to the question of "why is it shaped that way?" Bowls are indeed concave upward because that is the shape that performs the function of holding water in the presence of gravity. But the shape of bowls also reflects the way in which they were formed; for example, the perfect radial symmetry of the bowls in the photograph and the faint tool mark rings result from the formative process on the potter's wheel.

Another blogger, a designer by trade, has been puzzling over this same question. In "Form Follows Function Revisited," Curt Cloninger points out:

"A number of problems arise when this passage [from Louis Sullivan] is read from a utilitarian perspective. What exactly is the utilitarian function of granite rocks that necessitates their particular form?...."

After thinking through several examples, then suggests:

"...we could just as easily flip the phrase and assert that 'Function follows form.' .... Form and function are causally interchangeable—neither follows either, or both follow each. Or perhaps form and function are so contingent upon each other that they are practicably inextricable."

In backing away from the idea that causality flows in one direction only, Cloninger is streering us towards a more systemic view of form and function. For rivers, a resolution of this form/function paradox may come from envisioning a reinforcing (positive) feedback loop of influence cycling between form and function: A tiny rivulet forms, and differential erosion causes it to deepen at the center, where its flow is fastest. The concave-upward rivulet channel is now capable of performing the function of carrying water efficiently from a site of high potential energy to a site of lower potential energy. As the amount of water flowing through the appropriately-shaped channel increases, erosion continues to deepen the channel, across the full channel breadth but preferentially at the center where the flow is swiftest.....which increases the stream's ability to carry out its water carrying function. Form follows function. Function follows form. Form follows function. Function follows form. Et cetera.

My attention was drawn back to "form follows function" through one of the readings for the Cutting Edge Temporal Thinking Journal Club, a wonderful paper by Tim Shipley called "An Invitation to an Event." Tim compares and contrasts human's perception of objects in space (which has been relatively well studied) with our perception of events in time (which is less well studied). Along the way, he refers to the work of J. J. Gibson (1979) who made the case that shape and function are related in most objects.

Comment? Start the discussion about Does "form follows function" apply in geosciences?