Reflections from the Front Lines of Interdisciplinarity

Kim Kastens
Author Profile
published Mar 26, 2010
I recently spoke on a panel about "Interdisciplinary Research" at a conference of education researchers. I was recruited to provide an eye-witness account from the point of view of someone who does interdisciplinary research, to be followed by three speakers who research interdisciplinarity. I found this to be an interesting assignment, requiring new thinking on my part. Here's what I came up with: 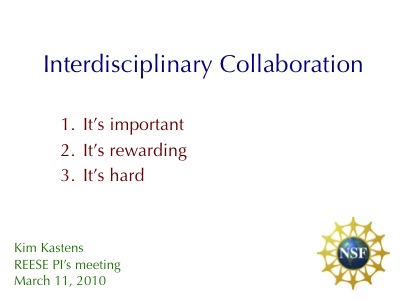 After foreshadowing the sum total of my insights on this topic in my title slide, I used examples from my native language of geoscience to make the case that interdisciplinary collaboration is important. 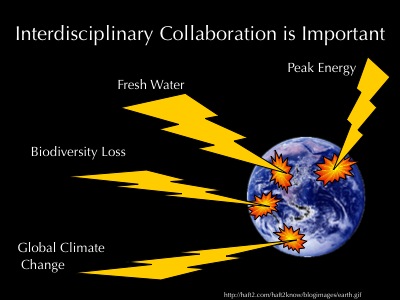 The power point slide was animated so the lightening bolts slid in from the edges with satisfying resonating crashing sounds, hammering home the risk to the planet from peak energy, fresh water availability, biodiversity loss, and global climate change. I took this moment to acknowledge my undergraduate helper, Katie Cagen, who made the more spectacular slides in my presentation. For her generation, these issues will be matters of life and death, for individuals, species, communities, and societies.

Every one of these problems is too big to solve inside a single brain, a single research group, or a single discipline; they all require interdisciplinary collaboration. From my point of view, NSF could not have picked a more important topic for this panel. To have a fighting chance to make it through our looming set of challenges, we have to figure out how to build functional, effective interdisciplinary collaborations, and how to educate young people so that collaborating across disciplines seems rewarding and natural.

Interdisciplinary collaboration spans a range of structures and contexts. I offered four examples from my own life by way of mapping the landscape of interdisciplinarity:

When interdisciplinary collaboration works well, it produces rewarding results. On ODP Leg 107, insights from sedimentologists, geophysicists, geochemists, stratigraphers, regional geologist, stratigrapher and petrologist all contributed to envisioning a dynamic landscape that no human eye was there to see. 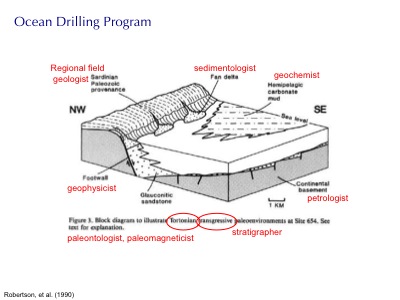 In ODP science, this kind of collaboration is expected, indeed required. Pretty much every ODP leg produces a shared vision of a former world.

In the Synthesis project, the collaborative product was more of a surprise, at least to me. We geoscientists began the Synthesis project thinking that geoscientists were people who happened to know a lot about rocks, or hurricanes or some other aspect of the Earth (left bubble, below.) Through discussion across disciplines we gradually constructed a vision of a geoscientist as a member of a community of practice, characterized by a shared set of perspectives, approaches, habits of mind, and experiences (right bubble, below) (Kastens, Manduca, et al, 2009.) 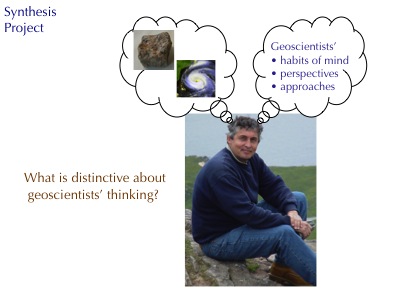 Although I like collaborating across disciplines, and I keep coming back for more of it, I have to say that it can be hard, for many reasons. The first reason would be the language barrier. People from different disciplines can use the same word or phrase to mean different things. And they can use different words or phrases to mean the same thing. The example below, in which the same situation is described by diametrically opposite terms by professionals in different fields, will be familiar to Earth & Mind readers from an earlier post. Jargon terms are a problem, but at least they are an obvious problem. A worse situation arises when a seemingly straightforward term--like "time"--is being used differently by the various participants in the conversation. 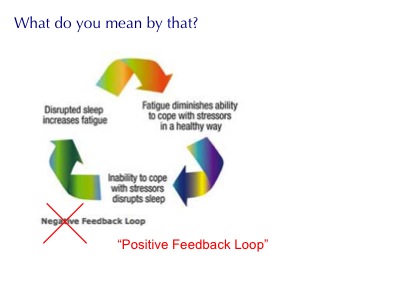 Another point of disconnect arises when specialists in different disciplines do not find the same things interesting or important. It may take hours to years of discourse to identify areas of overlapping interests, the sliver of common ground on which a productive collaboration can be built. 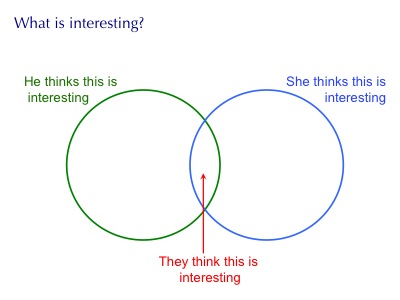 A workshop may not provide enough time for this process to play out. At a workshop designed to foster interdisciplinary collaborations on the topic of spatial cognition, I found myself discussing a classic data set (below), with a psychologist. He found the male-female contrast in people's ability to mentally rotate objects to be very interesting. He found the decrease with age in people's ability to mentally rotate the same objects to be "not interesting." 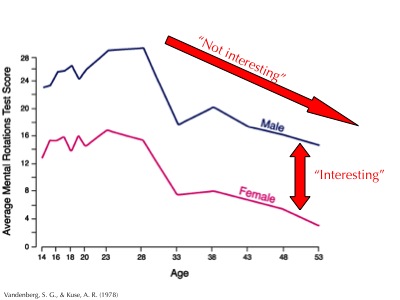 Outraged, I asked how he could he say that this trend not interesting: "What if I were teaching an earth science topic requiring spatial thinking to a continuing education class of adult learners; it would surely be very interesting and important to know that some kinds of spatial ability drop off with age!" He said, the trend is not interesting because it is expected: many cognitive abilities, especially as measured by timed tasks, drop off with age. The sex difference is "interesting" because it is unexpected and unexplained; few cognitive abilities differ significantly by sex. Upon further reflection, I think that this was another manifestation of finding meaning in cause versus consequence: as we looked at the same data representation, he was making meaning by thinking about the causes of the pattern, while I was making meaning by thinking about the consequences.

The next potential area of disagreement concerns what constitutes acceptable evidence on which to build a claim. This plays out at many levels, but perhaps the most fundamental is what constitutes a respect-worthy mode of inquiry. Geoscientists are accustomed to using multiple modes of inquiry, including classical experimentation, computer models, physical models, methodical examination of variation across space, methodical examination of changes through time, and comparison of ancient structures with modern analogs (Kastens & Rivet, 2009.) This combination of modes of inquiry has lead to major breakthroughs in geosciences, including plate tectonics and climate forecasting. But other fields don't share this history, and perhaps as a consequence, some practitioners of other sciences will only take seriously results that come from experiments-- "real" experiments with manipulated variables and controlled variables, where the experimenter is in charge of what happens. 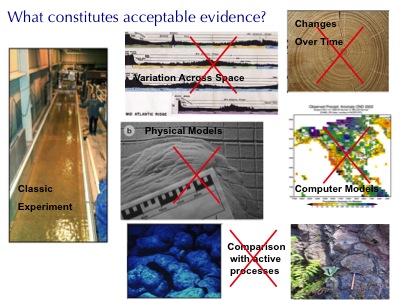 If an interdisciplinary collaboration does advance to the stage of collecting data and writing a paper, next arise various issues of how to present the project. Geoscientists, on average, favor visualizations (I'll blog about this at more length in another post) for portraying data, and also for stating the problem and summarizing the conclusions. Another discipline would favor statistics and tables for data and unadorned words for conclusions. 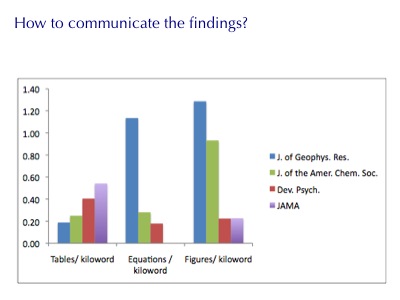 I think the most perilous moment in interdisciplinary collaboration comes at the hand-off between specialists who consider the common ground of shared interest to be a domain of basic research, and specialists who aspire to use findings from the collaboration for practical purposes. We saw this play out on the most public of stages in recent months in the flare up over the report from the Intergovernmental Panel on Climate Change, perhaps the most ambitious scientific collaboration in history. As recounted here, IPCC "Volume 2: Impacts, Adaptation & Vulnerability" got some relatively tiny details wrong (a date and an area) about how fast glaciers in the Himalayas are melting back under the influence of global warming. These errors provided an opening for climate change deniers to criticize the entire IPCC enterprise. I think this blunder can be understood as an imperfect handoff between the physical scientists who wrote "Volume 1: The Physical Science Basis" and the social scientists who wrote volume 2. 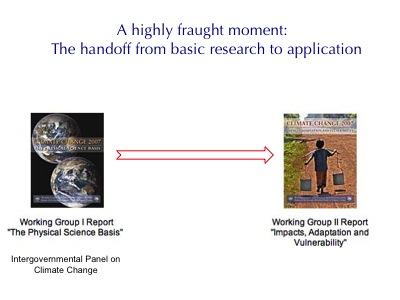 We see friction at this same interface between basic research and application in microcosm in smaller collaborations: the collaborator who is ready to recommend that the findings be applied across the nation versus the collaborator who says wait, wait, wait, the science isn't ready to answer that question yet, the empirical research doesn't support that conclusion yet, that is an interesting hypothesis ready to be tested, not a firm conclusion ready to be applied.

My thinking on this topic overlapped the Winter Olympics, and I found myself thinking of the basic research scientists in this situation as like the guys or gals in the back of the bobsled team. 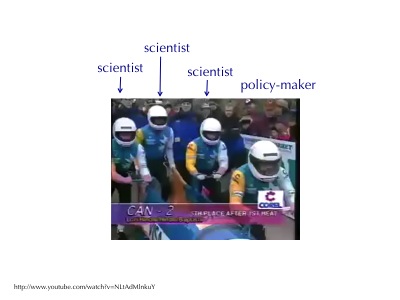 They train for years to be the best at what they do. Then they give it everything they've got for a brief moment, and build the momentum to get the enterprise going. And then their influence is over. They pass control to the policy-maker at the front of the sled. But they don't become bystanders; they are all in the sled going down the icy chute together, towards a gold medal and glory, or towards injury and death, as a team, as collaborators.

Acknowledgements: Thanks to my collaborators over the years, and especially to member of the Synthesis team who shared their thoughts on interdisciplinarity in preparation for this talk. Thanks also to NSF and fellow panel members for organizing the Interdisciplinary Research panel at the REESE PI's meeting, and to the audience for a lively and provocative discussion. The panel presentation included a few more slides, not shown here; conversely, this blog post includes a few thoughts that didn't make it into the panel presentation.

Reflections from the Front Lines of Interdisciplinarity --Discussion

Kim, I think this is a fantastically thought-provoking post. I am one of the first graduates of the Earth Systems program at Stanford, which attempts to study environmental problems from an interdisciplinary perspective with a combination of Biology, Geology, and Economics. In some ways I think this background has made me feel more comfortable with interdisciplinary research, and is perhaps why I ended up studying paleoclimatology in graduate school, but to some extent I always feel like I'm playing catch-up, with no solid disciplinary grounding to call home. Now that I'm teaching in a fairly traditional Geology department, I am seeing up close the value of having that disciplinary grounding, and struggling to maintain some aspects of interdisciplinarity. I agree with you, most of the most important problems to be solved are very interdisciplinary, and require the hard work that you describe.

There's so much more to say about what you've written here, but I will just mention two inspirational bits- what a great idea to have undergraduate assistants help you create terrific powerpoint slides! Digital natives often seem much more adept at these technologies... and the figure about tables, equations, and figures per kiloword in various disciplinary journals is priceless. Thanks for an inspiring piece.

Hi Christa, Nice to hear from you. I've heard that critique of interdisciplinary education at the undergraduate level, that graduates would suffer from the lack of a disciplinary intellectual home. My own sense is that everyone I know is playing catch-up these days, trying to self-educate on things they didn't learn at school. It seems like no one's education was both broad enough and deep enough to fully prepare them for such a fast-changing world. So now I'm trying to figure out how to help students become efficient and fearless self-educators.
Kim