We've been writing a lot on the blog and in Synthesis Project manuscripts, about interdisciplinary and multidisciplinary collaboration. In so doing, we are reflecting an important trend within Geosciences, as the field tries to grapple with problems that are too big for one brain to solve.

Yet even as this trend picks up momentum, there is a discernible countercurrent of colleagues who decidedly do not want to be drawn into interdisciplinarity. I might paraphrase their point of view as: "I study A, and the reason that I'm good at studying A is because I focus on A, and I really don't think that B, C, D, E, and F are as interesting or important as A, and if I did I would have studied them instead of A. So leave me alone, and let me get back to work studying A." Their point is well taken: Deep expertise requires concentrated focus over a long duration, and collaboration takes time. Moreover, without the findings of disciplinary specialists, the interdisciplinary folks would have nothing upon which to build. 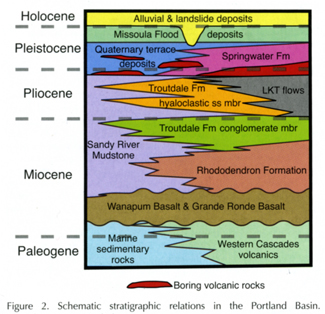 from Evarts, et al (2009).
Usually this tension between the let's collaborate camp and the let me alone camp simmers quietly, perhaps flaring up behind the closed doors of a staff meeting. I was therefore surprised, while thumbing through the current issue of GSA Today, to find an illustration that seemed to express the latter point of view right out there in public for all the world to see.

In the midst of an intricate stratigraphic diagram of cross-cutting sedimentary relationships there was a minor unit, conspicuously colored in bright red, and conspicuously labelled as "Boring Volcanic Rocks."

Does that really say "boring?" My goodness, how....um...forthright.

So yes, this was a joke--a joke on me, in fact. But the question exposed by the anecdote remains unresolved: What is the appropriate balance--for an individual, a department, an institution, or the discipline as a whole--between boring down into the intricacies of specific subdisciplines and spreading out to span multiple disciplines?

Kim,
Yes it does. There is a town just south of Portland named Boring, Oregon. The area contains over 30 cinder cones, some of which are within the Portland city limits. When I was in college up in washington State, this town was a regular joke about the state on our southern border.

For more info, check out http://en.wikipedia.org/wiki/Boring,_Oregon

Still, I wonder if there are Boring Fossils, or Boring Turbidites out there somewhere? :)

« "Geologists are comfortable with uncertainty"       Winner Take All »