(This post is adapted from a talk I gave on "Teaching Complex Earth Systems Using Visualization" at the Cutting Edge workshop on "Developing Student Understanding of Complex Systems in the Geociences." My powerpoint and those of the other speakers can be downloaded from the online program.)

In a previous post, Universal versus Conditional Truths, I made the case that concept-driven visualizations in earth sciences can lead students and other viewers to underappreciate how much variation there is in the earth system. The scientists and illustrators who create such diagrams must make many decisions about what to include and how to depict those feature that they do include. Of necessity they typically leave out more options than they include.

Today I would like to explore the possibility that the entire community of people who create concept-driven visualizations are collectively under-representing the range of possibilities in the earth system. Consider the suite of images that are returned from a Google Image search on "Water Cycle." 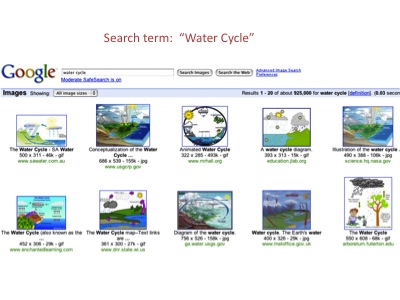 These images come from government agencies, universities, and educational NGO's. They come from the U.S. and several other countries. Some are targeted at kids; some at adults. In spite of these varied sources, the diagrams have several striking similarities. All are concept-driven visualizations, lacking any kind of numerical or graphical data. All rely heavily on arrows (wavy, straight, or curved) to depict fluxes of water to and from the various reservoirs. And, oddly enough, most show evaporation only over the ocean: 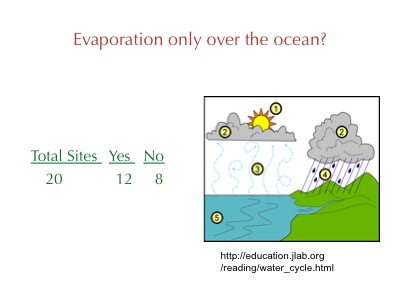 And, conversely, precipitation only over the land. Now I have spent many months at sea, and I can attest with 100% confidence that it DOES rain over the oceans. And it snows over the oceans also. 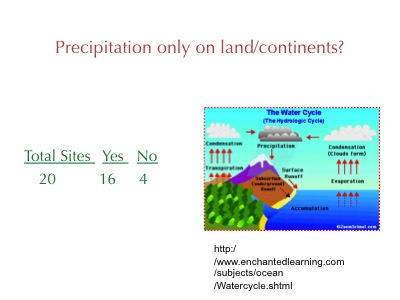 Even stranger, more than half of water cycle diagrams analysed show precipitation happening only over mountains. I would guess that the majority of scientific illustrators, like the majority of people, live close to sealevel. They should know, from personal experience, that precipitation does not only fall in the mountains. But there you have it; that's what their diagrams show. 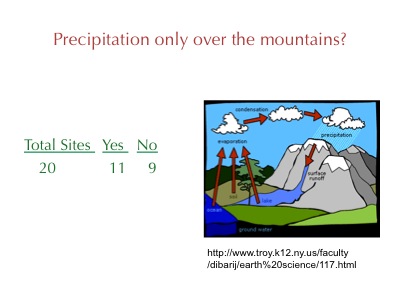 And now the weirdest of all, 15 of the 20 analyzed water cycle diagrams show the ocean on the right and land on the left. 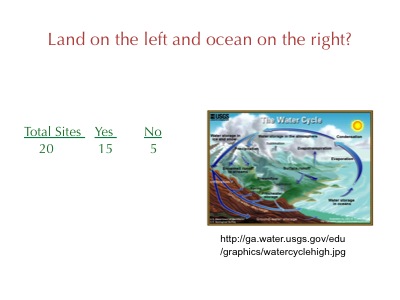 Regular readers will know that when trying to make meaning from a pattern, I ask myself about possible causes and possible consequences. Concerning causes, I can imagine that illustrators look at each others' work, and the visual vocabulary for depicting the water cycle is transmitted from person to person as a sort of visual meme. Perhaps there was an ur-water-cycle-diagram back in the early days of earth systems thinking, and modern water cycle diagrams have carried forward graphical elements from this ancestor.

Concerning the continent on the right and land on the left, an artist who heard me mention this idea in a talk said that it was a convention in art to have the lower right corner as a source area (I wasn't able to verify this in a quick web search). Other listeners suggested that perhaps the center of mass of the textbook publishing industry in the U.S. is on the east coast.

One way to push back against this misconception might be to have students critique the set of diagrams, identifying and articulating misconceptions that they think might be conveyed by individual diagrams or by the group of diagrams together.

The image collection used for the analysis reported above comprised the top 20 images returned by a Google Image search on "water cycle," after omitting duplicates and near-duplicates, carried out in the spring of 2007. Thanks to Margie Turrin who coded and tallied the water cycle data.

Thanks also to the participants at two conferences, for their comments and thoughts on these ideas: the Gordon Conference on Visualization in Science and Science Education, July 5, 2007, and the Cutting Edge workshop on Developing Student Understanding of Complex Systems, April 20, 2010.

Research idea: I find this idea intriguing, but I have not found the time to pursue it any farther since my quick-and-dirty data acquisition back in spring 2007. I would welcome someone else to take this idea and run with it, analyzing more figures and more topics with appropriate statistics, and trying to trace graphical conventions backwards in time in old textbooks. This would make a great project for an undergraduate interested in science education. If you or your student pursues this idea, please be sure to credit this blog post in accordance with our terms of use.

I am reminded here of Alistair Fraser’s (of Bad Meteorology website) view that there is a difference between made simple(stripped to its essence) and made simplistic (stripped of its essence). Your examples are errors of omission (that is, correct information is left out). I would be inclined to say that we have a bigger problem with outright errors or professional shorthand that is erroneous on its face, even if professionals know what is correctly meant.

By definition, a model is a generalization. It is important how to generalize in a desirable way, so your question is worth discussion.

As for raining on the ocean, I am reminded that Isaac Asimov once wrote than when he was in the Army on a troop ship headed into the Pacific during World War II, he broke down laughing hysterically. His sargeant, who already thought Asimov weird, asked why. Asimov replied “It is raining.” The sargeant said, “What of it?” Asimov replied that since there was already plenty of water in the ocean, why should it need to rain there?

Hi Kim, Thanks for the insights into the complexity represented, and omissions (purposefully? or through intellectual laziness?) excluded from a diagam that is so widely used as the water cycle. A cascade of thoughts: 1)This is a nice example of the need for detailed study guides to help instructors unpack the many layers of information encoded in this diagram. What prior knowledge is needed to understand this diagram? What experience, pre-conceptions or misconceptions do students have that will control their (mis)understanding nof the diagram? Is the diagram consistent with what is known or observed (as per the lack of rain over the oceans)? How can we help teachers use such diagrams to promote inquiry and critical thinking (e.g. sets of scaffolded questioning that can lead to deeper understanding)? 2) This just underscores the need for deep and meaningful annotations to accompany the figure, as per Barbara Tversky's work. 3) Use of these types of diagrams can really support development of students' metacognitive skills--we can use embedded assessments to ask students not only "what" but also "why", "does this make sense", "should I go back and reconsider..."? 4) What is significantly missing is scale and rate in the water diagram: what are the fluxes? how much water is transferred at any stage? what is the residence time in reservoirs? Even though the diagram represents the water "cycle", you can't really understand how cycles work without considering rates and fluxes. Thanks for a stimulating contribution!

I teach hydrology and I find I need to modify any water cycle diagram before it can be usefully employed. In my opinion the most egregious error is that most water cycle diagrams show precipitation entering directly into streams and rivers as "runoff" when, in fact, most water flowing as runoff in surface water systems has infiltrated into the groundwater system and returned to the surface as baseflow. This is not just an academic error. By not demonstrating that almost all surface fresh water is derived from groundwater, water cycle diagrams contribute to the impression that surface water and groundwater are disconnected and that groundwater is a resource that can be exploited without consequence to surface water systems. Much damage to the surface environment and freshwater ecosystems has come about because of over exploitation of groundwater and the failure to appreciate that pumping groundwater reduces or reverses baseflow, leading to the drying up of streams, lakes, ponds, and other wetlands.