Even Darwin Struggled with Dip and Strike 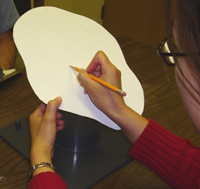 Test apparatus for dip & strike (credit)
When students were asked what aspects of introductory geology they found most troublesome, dip and strike featured on many students' hit lists (Helmer & Repine, 2006). One thread of my research with psychologist Lynn Liben seeks to understand why dip and strike are so hard for so many students.

(credit)
Instructors and students who have struggled with this topic may find it reassuring to learn that even Charles Darwin struggled with dip and strike. Shortly before leaving on his epic voyage on the Beagle, he wrote to J. S. Henslow, professor of mineralogy and botany at Cambridge University:
I should have written to you sometime ago, only I was determined to wait for the Clinometer: & I am very glad to say I think it will answer admirably: I put all the tables in my bedroom, at every conceivable angle & direction I will venture to say I have measured them as accurately as any Geologist going could do. Darwin Correspondence Project: Letter 102

I love the image of one of the greatest observational scientists of all time, with the tables in his bedroom all askew, trying to master his brand new clinometer.

Yet he managed to figure it out, and traveled around the globe recording dips and strikes wherever he went. Searching on "dip" in the online database of Darwin Correspondence yields 21 letters referring to geological dip. For example, on 18 April 1835, Darwin wrote from Valparaiso of his observations in the Cordillera:

"... in the Portillo pass, proceeding Eastward we meet an immense mass of a Conglomerate dipping to the West 45o, which rests on Micaceous Sandstones &c &c, upheaved, converted into quartz rock, penetrated by dykes ..." Darwin Correspondence Project, Letter 274

How did he master this skill on his own in his bedroom, when so many students struggle, even with a professor, TA, and fellow-students to help them? The first quote above holds some clues:

In other words, he had a strong metacognitive awareness of his own learning process.

Sometimes I think we work too hard at trying to craft ever clearer explanations and ever more engaging learning activities--and not hard enough at figuring out how to help our students teach themselves. I want my students to tip all the tables in their dorm rooms up at weird angles, metaphorically speaking. Even trickier, I want them to come up with the idea themselves, to tip up the tables at weird angles.

Even Darwin Struggled with Dip and Strike --Discussion

Hi Kim, I extended one of my trips to the east coast specifically to see the Darwin exhibit at the American Museum of Natural History. I have to say that I stood in awe of the genius of this man as we walked through the many stages of his career. I was delighted that the profound influence of geologic knowlege on his own thinking about Nature was vividly displayed--contributions that are not widely known or acknowledged in other representations of his work. Thanks for shedding more light on his own development as a natural scientist, and also for introducing us to the Darwin Correspondence Project.

This post was edited by Phuoc Huynh on Apr, 2017
A reader called my attention to the blog maintained by the curator of the Darwin exhibit at the American Museum of Natural History, Niles Eldredge, who wrote about Darwin's preparations for his voyage on the Beagle at:
www.nileseldredge.com/darwin_blogs_025.htm
Two interesting points:
* Darwin spent a week in the field with geologist Adam Sedgwick (Professor of Geology at Cambridge) training in field geology before the self-teaching episode with clinometer in the bedroom.
* "To the end of his life, Darwin regarded himself first and foremost as a geologist."

I would not have guessed that Darwin thought of himself as a geologist. Thanks for that link Kim.

I downloaded your poster on strike and dip/water level task performance. Very interesting! Do you know if there's any research on whether interventions can help students who do poorly on the WLT to improve their abilities to visualize the horizontal?

Cognitive aspects are clearly at issue here, but I'd like to add that *language* is an unexpectedly large barrier, as well, to teaching three dimensional thinking in structural geology.

I had taught structural geology at Hamilton for quite a number of years before I tumbled to the fact that a surprising number of my students do not have accurate internalized definitions for the words horizontal, vertical, perpendicular, and parallel. Early in the semester, I always ask students on a homework assignment to write definitions of the four words, and, in a class of 20, only a couple will be really clear and spot on. Most are hazy about the distinctions, and a good 1/3 are disastrously wrong (from the point of view of learning structural geology). The most common misconception is that something that is horizontal is oriented east-west and that something vertical is oriented north-south. The same problem occurs with perpendicular and parallel, which many of my students think of as being absolute orientations (i.e., they'll say something like, "The line is perpendicular." - not perpendicular *to* something else, just "perpendicular").

So, it's difficult to teach strike and dip successfully if you don't realize that a significant portion of the class visualizes east-west when you say horizontal. Or that they visualize a vertical line when you say that the dip line is perpendicular to the strike line....

These are very firmly held mental definitions. I can ask students mid to late semester in a structural geology course, and some students will still spontaneously give the "horizontal = EW" definition. And, the more you ask them to talk in class or lab, the more likely you are to hear them say things that make it clear that their ideas of horizontal, vertical, perpendicular, and parallel are not the same as yours.

And we typically use the terms "inclined" and "inclination" when we're talking about dip, and, to a structural geologist, inclination is always measured in the down-dip direction. But most students visualize an incline as going *up*, not down, so when we talk about the angle of inclination, they're visualizing up not down.

On another thing - the tendency for students to put either the strike or dip line parallel to the edge of something (outcrop, clipboard, etc.) is a strong one. A couple of years ago, I got a bunch of cardboard circles for them to practice strike and dip on so that they wouldn't be distracted by the edges.

I guess that I'm not sure that Darwin's letter implies that he "struggled" with dip and strike. It sounds as though he used tables as proxies for outcrops in order to learn how to use his new clinometer, but that he was very confident with the quality of his results. Students who struggle with the concepts of strike and dip also struggle with how to even place a compass on a table/outcrop (although they sometimes are confident in the quality of their results as well).

I have to admit that I played with my Freiberger compass (dip, dip direction) a bit before I went into the field when I switched to it from a Brunton, yet I don't feel that I have conceptual issues understanding strike and dip.

Perhaps "struggled with" was an overly dramatic choice of words on my part. Certainly compared with students who can't figure out how to place the compass on the dipping surface (as you described), or who aren't clear on the meaning of horizontal (as Barb Tewksbury described), Darwin was on top of the concept and the skill. What Darwin's letter conveyed to me was that he found the process of measuring dip and strike to be far from non-trivial, something that needed to be consciously and purposefully practiced again and again with different surfaces inclined different ways.

Thanks for your wide-ranging and interesting questions and observations.

With respect to whether there are interventions that can improve the ability of students who do poorly on the WLT task to visualize the horizontal, performance on the WLT itself is very resistant to improvement through instruction. As far as I know, no one has tested whether improvements in WLT performance translate into better understanding of horizontal in a real world 3-D context.

Lynn Liben and colleagues tried many interventions for the classical WLT (e.g. stating that the water will remain horizontal, having students manipulate real bottles of water), with only limited improvement. They eventually found a form of intervention that worked pretty well (rule was stated twice, then presented as a fill-in question, then answer to fill-in question was given, then asked again as an open ended question at the end). Liben, L. S., and Golbeck, S. L., 1984, Performance on Piagetian horizontality and verticality tasks: Sex-related differences in knowledge of relevant physical phenomena: Develpmental Psychology, v. 20, p. 595-606.

With respect to the idea that *language* is a problem, there is a really interesting but somewhat dense paper by Talmy, L., 1983, How language structures space, in H. L. Pick, J., and Acredolo, L. P., eds., Spatial orientation: Theory, research and application: New York, Plenum, p. 225-282. Basically, he says that the language we use informs and shapes how we think about space. Which means that you are right to be seriously concerned about your students' ability to understand spatially-demanding concepts if they are using and understanding spatial language differently than you do.

So after you give your students the homework question to define horizontal, vertical, perpendicular and parallel, and find that 1/3 of them are seriously wrong, what do you do next to try and get them all using the same language? Also, have you ever asked them to define "north," "south," "east," or "west"? If they define "horizontal" as east-west, I wonder if they also define east and west in some strange way?

Sorry for the long delay in reply - I've been in Egypt doing field work.

I do ask them to define east, west, north, and south, and the answers are commonly right, left, up, and down, or something like "north is perpendicular to the horizontal". So, language is a real issue.

My strategy is to talk about it in class and reinforce the correct language by specifically saying what is and isn't correct terminology when I use it; I also give them straw sentences with terminology, and we work through whether the terminology is correct or not; and I correct students in class (gently) when they use the wrong terms. The main thing is recognizing that many students aren't using the terms the same way we do. If an instructor is just lecturing to students, instead of having conversations, that might never emerge.