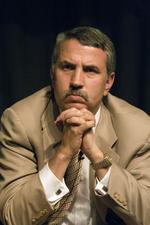 I hope that everyone has seen Thomas Friedman's recent column The trajectory of three bombs (also published under 'The Threat of the Other Two Bombs: Debt and Climate Change'). Friedman describes the potential rapid swing from our current climate and debt regimes to fundamentally different states as equivalent to a nuclear explosion - a large magnitude event changing the world as we know it. He does an excellent job of describing a tipping point, built up of tiny events that could trigger these changes. While this article is masterful in helping the public understand the nature of the climate problems, what I like best about it is the analogy Friedman draws between the economic and Earth systems. These are both complex systems and a systems approach allows very powerful insights into their behavior. He beautifully captures the importance of feedbacks in amplifying affects, the local impact of far removed influences, and the uncertainty that comes from tipping points in behavior.

A number of years back, I was startled to realize how profoundly a systems approach had infiltrated my thinking. When I look at the behavior of our political leaders I see a complex system at play -- the way that issues play out has everything to do with interactions in this system (which includes not only political leaders, but industry/NPO leaders, lobbyists, media, etc.); seemingly mystifying behavior starts to make sense in terms of drivers and feedbacks operating on the major groups of players; and the seemingly small acts of individuals can change the state of the system radically affecting the outcome. Similarly, in my work life, I see a complex system in action where feedbacks maintain or purturb desired behaviors. An analysis of the system's dynamics helps me understand why things are happening to me, as well as where I might best focus my energies. Switching to a systems view relieved me of believing that I controlled the outcomes of my professional life through simple cause and effect, and created a much more realistic view allowing me to balance responsibility with a respect for external influences. It also provided insight into ways in which I could effectively influence the system--on scales from the office dynamics to the educational community.

A systems perspective is fundamental to our field--we think and teach about understanding the Earth in this way. I suspect that most geoscientists have found that their deep understanding of the Earth as a system is useful in understanding other systems. But when I talk to others, I am impressed that this powerful paradigm for understanding behavior (organic and inorganic) is not in particularly widespread use. After reading the Friedman article, I was talking to a colleague in political science who studies complex systems. He reported that a systems approach, like Friedman's, is not particularly widespread in political science which still focuses primarily on the cause and effect of major players. When I think of the long, long time that it has taken to draw public attention to the influence of human behavior on the climate system, I wonder if much of the problem has been the inability to grasp a systems point of view. Perhaps this is the most important thing we can bring to the general education of our students-- the most important transferable skill.

Developing an understanding of the Earth as a complex system is almost always listed in the top five things that one should learn about the geosciences -- be it in the new Earth science literacies or in a description of the goals of a geoscience major. There is no question that this is a central aspect of our science. However, I would suggest that we need to do more to help students develop a working ability to analyse the world around them through this lens, because as Friedman shows us, it is a powerful lens indeed.

Let me be clear that I understand that this is no small task. Work by Chi (2005) and Slotta and Chi (2006) suggests that this is a fundamental change in understanding that while profound is not easily accomplished. Teaching complex systems in the geosciences is an area of active research (see for example the Synthesis Journal Club readings on Complex Systems or Earth and Mind (2004)). On the Cutting Edge is addresssing this topic in April as part of its emerging theme series (Developing Student Understanding of Complex Systems in the Geosciences Application Deadline Feb 1)

Developing the capacity to view the world through a complex systems lens cannot be developed in a single course. One of the recommendations coming forward from our synthesis project is the need to think more broadly about the introduction of a systems perspective through the middle and high school curriculum (Kastens, 2009). More immediately, geoscience could benefit by understanding who its allies are in meeting this challenge. We are not the only discipline to which a systems approach is fundamental, it is equally important to ecology, economics, and electrical engineering. We have much to learn from these disciplines and much to gain through collaboration. That said, we reach a very large segment of the college population in our introductory courses, the opportunity to change their thinking is too big to miss. Developing a systems approach is too important for our survival as a species, not to mention developing responses to current environmental, political and economic challenges. In pointing the way, Friedman is an important ally.


References:
M.T.H. Chi (2005). Commonsense Conceptions of Emergent Processes: Why Some Misconceptions Are Robust. Journal of the Learning Sciences. 16(2), 161-199.

I'm reading a great book called "Thinking in Systems" by Donella Meadows (aka Dana Meadows). Her chapter 6 "Leverage Points--Places to Intervene in a System" would be great reading to for anyone who wants to follow in Cathy's footsteps as far as seeking "insight into ways in which I could effectively influence the system--on scales from the office dynamics to the educational community."

Hake, R.R. 2009a. “Over Two-Hundred Annotated References on Systems Thinking,” online as a 1.7 MB pdf at https://web.archive.org/web/20171201221357/http://www.physics.indiana.edu/~ha... . The abstract and link to the complete post are on my website “Hake's Ed Stuff” at http://bit.ly/duhqLE with a provision for comments For other related posts go to “Hake's Ed Stuff” at http://HakesEdStuff.blogspot.com/ and scroll down to and click on “Systems Thinking” under “Labels” in the right-hand column.