Kim Kastens
Author Profile
published Nov 1, 2010
This semester I am teaching a section of Frontiers of Science, the science course in Columbia University's famous Core Curriculum. Under the auspices of the core curriculum, generation upon generation of Columbia undergraduates have studied great accomplishments of human creativity in literature, art, music and philosophy. Beginning seven years ago, the powers that be decided that science is also a great accomplishment of humanity, and added the "Frontiers" course.

This semesters' version spans four disciplines: Brain & Behavior (Neuroscience), Astronomy, Earth Science, and Biodiversity. The topics are intended to encompass material that most students would not have studied in high school, so that every student finds something interesting and challenging in the course. A side effect of this course design is that no single faculty member knows all or even most of the material. The College has tried hard to establish a supportive community of practice among the nineteen seminar leaders, and sharing ideas across disciplines has been one of the more rewarding aspects of teaching the course.

The metamessage that is supposed to be accumulating across the four topics is "Scientific Habits of Mind," how scientists think and learn. The course materials never use the term "Epistemology," but that is in large part what this course is about--how scientists know what they know. I've been using the Claims/Evidence/Reasoning mantra that I picked up from the IQWST curriculum developers to articulate the elements that students need to incorporate into a scientific explanation. I have been stunned to realize how different is the nature of evidence and reasoning in the four disciplines we are teaching.

The Brains & Behavior evidence and reasoning is surprisingly earth-science-like. They do many different kinds of studies, including classic experimental studies with a controlled and manipulated variable, and observational studies that take advantage of natural variation from person-to-person or group-to-group. They do high-tech studies with expensive imaging tools, and low-tech studies with the human senses. It seems that a single line of evidence is rarely definitive; instead a given line of evidence tends to "favor" or "support" a claim rather than require it absolutely. For example, in support of a claim about how the brain accomplishes vision, evidence is assembled from animal studies, several different types of imaging, and the capabilities and limitations of brain damaged individuals. The various lines of reasoning gradually converge towards a conclusion, supported by the preponderance of the evidence, as in forensic science--or earth science. 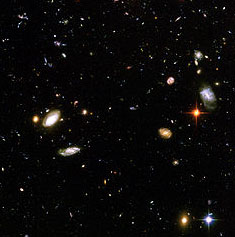 Portion of the Hubble Ultra Deep Field <image source>
In Astronomy, on the other hand, they have (to a first approximation) only one form of evidence: Light. Or, to be more specific, electromagnetic radiation across a wide range of frequencies, which in popular writings they sometimes generalize under the umbrella term "light." (I should also mention that this astronomy unit takes place entirely outside the solar system.)

As this astronomy material is largely new to me, I've had the opportunity (or perhaps the necessity) to model for students how I get my mind around a new body of knowledge. One of my strategies is to use a form of concept maps that I call logic diagrams. In the logic diagrams I have used previously, and described here, the arrows indicate the flow of causality or influence in a natural system; for example, the fresh water from the Mississippi River causes density stratification in the Gulf of Mexico, which causes less mixing of surface and deep water, which causes decreased oxygen in bottom waters, etc.

In Astronomy, I've found myself building logic diagrams with a different meaning. In these new logic diagrams, the arrows indicate the flow of information or insight from evidence, through chains of logical reasoning, to scientific claim. The flows are within the scientific community, rather than within nature. 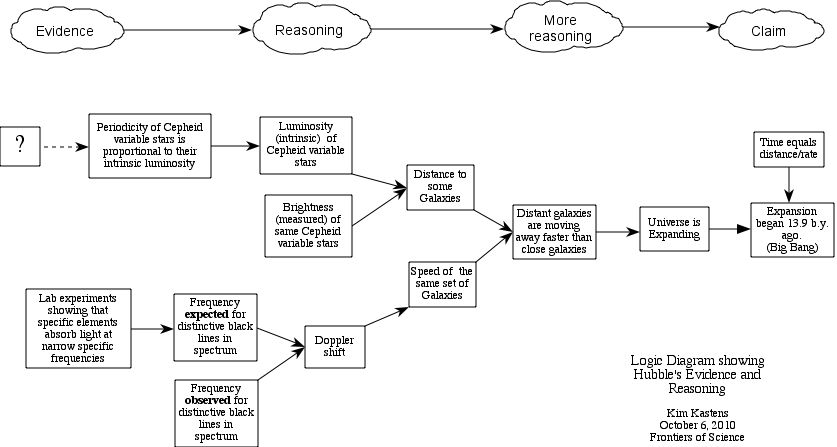 I find myself wondering why Astronomy can build these very long chains of logic, without the whole house of cards falling apart. They don't seem to have this messy preponderance of the evidence stuff, as we have so often in geosciences or brain and behavior, where no single data set is conclusive, but many data sets and lines of evidence converge to support a claim collectively.

Comment? Start the discussion about Astronomers' Tricks with Light

« Multiple lines of reasoning in support of one claim       Does Memory Integrate over Time? »