These two case studies were written by participants at the 2007 workshop Geoscience Courses that Prepare Future Teachers (sponsored by the National Association of Geoscience Teachers) which took place at Carleton College. Dr. James Ebert (SUNY - Oneonta) and Dr. Rebecca Dodge (University of West Georgia) examine how their respective departments have adapted their curricula to serve pre-service and in-service teachers and sustain department viability. 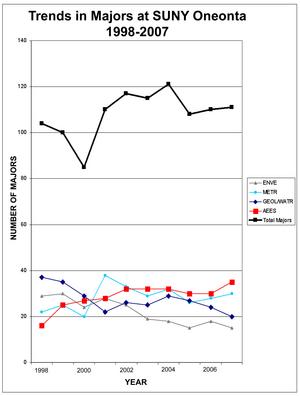 This graph shows the different geoscience related majors at SUNY Oneonta from 1998 to 2007. Click on the image to view full size. Details

The Earth Sciences Department (comprising 9 full time faculty) at the State University of New York College at Oneonta (SUNY Oneonta) is a multidisciplinary department offering majors in Geology, Water Resources (Hydrogeology), Meteorology, Environmental Science (Earth Science track) and Earth Science (commonly a dual major with Adolescent Education Earth Science). The relative proportions of students in each of these majors have fluctuated over the past 15 years, but three trends are apparent.

The number of majors in Geology and Water Resources (Hydrogeology) has fluctuated slightly but has declined overall over the past ten years. Although the Geology major has maintained a nearly steady average of 18 students, the number of majors in Water Resources has declined precipitously from a peak of 42 in the early 90's to a low of 5 in 2007. There is overlap in the curricular requirements of these two majors and graduates of both programs typically find work in the environmental consulting industry upon graduation. When enrollment data for these two majors are combined, there has been an overall decline of 67% from 61 majors to 20 since 1998 (see graph). This decline mirrors national trends which have been a significant cause for concern among departments. In parallel, the number of majors in Environmental Science, Earth Science track has also declined.

Despite these worrisome declines, the total number of majors in the department has remained relatively steady with an average of about 118 majors per year. This stability is attributable to increases in two other majors in the department: Meteorology and Adolescent Education Earth Science (AEES). The number of students majoring in Meteorology has varied considerably, but overall there has been an increase from 1998 to 2007. Reasons for this trend are not currently known. The increase in Adolescent Education Earth Science majors is a result of several overlapping factors.

Following mandates from the New York State Education Department, SUNY Oneonta began working in the late 1990's toward accreditation of its teacher preparation programs through NCATE (National Council for Accreditation of Teacher Education). NCATE requires a clear governance structure in the Education "unit" so the college formed a Division of Education with separate departments of Elementary and Secondary Education. Now, AEES majors would be formally housed in the Department of Secondary Education (along with teacher candidates in the other sciences, English, Social Studies, etc.). In addition, curricular changes (designed by the Secondary Education Department in consultation with the Earth Sciences Department) were proposed which would make it nearly impossible for majors in AEES to dual major in Earth Science. Our department was faced with a serious challenge. In addition to declining majors in Geology/Water Resources, we also faced the likelihood of losing between half and two thirds of our Earth Science majors.

In response to this threat, the department revised the Earth Science major to mirror the requirements of AEES to facilitate dual majoring. We chose to regard this as an opportunity to improve the major, to be consistent with the NCATE standards and to better address the content and skills required to teach high school Earth Science in New York. The enrollment impact of this decision was significant. Whereas it was an option before, now all AEES majors are dual majors with Earth Science. This has produced a 57% increase in the number of dual majors over the past 10 years (See graph. Note also the increase during 2000, the year of NCATE accreditation.) By facilitating the dual major, we have also been able to retain students that decide that they do not want to teach; they can remain in the Earth Science major. On average, there have been 10 students per year that major in Earth Science, but are not dual majors with AEES. These majors are not included in the data on the accompanying graph. Currently, majors in AEES and Earth Science comprise 35% and 46% of our majors respectively which makes them the two largest majors in the department.

The Role of Recruiting

There are two additional factors which have contributed to the increase in AEES majors: an increasing demand for teachers and departmental recruiting efforts. The increased demand for teachers in New York, especially in Earth Science, is primarily driven by demographics. The Earth Sciences Department has tapped into this trend through multiple means, the most important of which have involved direct outreach to high school teachers. Many of these teachers are our alumni and they regularly refer their students to us, citing the excellence of their experiences at Oneonta. In addition, the department has made significant efforts to provide professional development opportunities for teachers which have increased the visibility of the department. Two initiatives have been particularly important; these are the ESPRIT email list for Earth Science teachers (http://external.oneonta.edu/mentor/listserv.html) and the Oneonta Earth Science Outreach Program (ESOP). Oneonta ESOP also promotes recruiting by encouraging high school students to pursue advanced course work in the Earth Sciences for which they earn college credit from Oneonta.

During the past three years, 4 of 9 faculty in the department have retired and in each case, the administration has authorized replacing these retirees. We are absolutely convinced that this would not have happened if our base of majors had not been stabilized by the inclusion of the AEES/Earth Science dual majors.

One of the main reasons that I was attracted to a job opening at the University of West Georgia in 1999 was their focus on Earth Science Education. As a new faculty member, I was interested in the opportunities to interact with in-service Earth Science teachers who were taking graduate-level classes both during the summers and the regular semesters, in the fondly termed "teacher tune-up" program that had been active for many years at UWG.

Faculty offer graduate-level versions of upper-division Geoscience classes taught in the evening, so that local in-service teachers can enroll as non-degree graduate students and get updated on or learn new Earth Science content and skills. In cooperation with the College of Education, Education majors working on a Masters degree in Middle Grades Science are also able to meet Science elective needs through this program during the Fall and Spring semesters and during the summer. I regularly have approximately one third of the seats (total enrollment 12-15 students) in my evening Remote Sensing and Image Processing classes filled with in-service teachers, who bring a great deal of experience into my classroom and generally raise the expectations for performance within the whole class.

During summer sessions, the opportunity to teach courses is dependent on demand, and undergraduate demand alone does not create opportunities for many classes. The demand for summer courses in Earth Science from in-service middle grades Earth Science teachers guarantees that my Department can offer - and fill with 20-40 students - an Oceanography for Teachers class and at least one Earth Science for Middle Grades Teachers class each summer. I have also offered GIS for Teachers and Environmental Observations for Teachers, both of which are well received and filled quickly (with a smaller enrollment cap of 20 since these are lab-intensive classes).

The demand for the Earth System Science for Secondary Teachers is expected to necessitate a separate class for that market next summer, now that Earth Systems Science has been added to the High School Science curriculum across the State of Georgia. This recent development also offers my department an excellent opportunity to develop a Masters-level Secondary Earth System Science recertification program for Science teachers in other disciplines, which will dramatically improve enrollment in our graduate "for teachers" classes. At the same time that we will re-focus our existing undergraduate Secondary Earth Science certification program on Earth System Science, and hope to improve enrollments at the undergraduate level with the integration of a more environmental focus. We envision that both newly certified graduates and recertified in-service teachers will join our other graduates and become recruiting partners for our Geosciences Department, into majors including Geology, Physical Geography, and Secondary Earth Science Education.

From the Departmental perspective, my Chair and the other faculty involved see the advantages to our efforts in terms of potential recruiting partners in local classrooms, as well as in creating teaching opportunities during the summer and filling our regular-semester classes with an element of maturity and focus. Finally, the new recertification program, which will require considerable course development and teaching commitments, may necessitate new faculty lines to deal with commitments to support these activities.