Provenance: This image is taken from a site that offer free access for non-commercial purposes
Reuse: This item is offered under a Creative Commons Attribution-NonCommercial-ShareAlike license http://creativecommons.org/licenses/by-nc-sa/3.0/ You may reuse this item for non-commercial purposes as long as you provide attribution and offer any derivative works under a similar license.

One of the first and most important steps to take prior to infusing QR in course instruction is having some data on students' QR skills, including their strengths and weaknesses. Some possible tools for gathering relevant data include course, program, and institutional QR assessment and evaluation; monitoring/tracking of student assignments and portfolios; and survey data on student QR skills as well as post-graduate placement (including graduate education and employment) and success. For example, several colleges and universities (e.g., Hollins University, Wellesley College) have implemented a Quantitative Reasoning (QR) assessment test that is administered to incoming students to gather baseline data. The section of NICHE that focuses on assessment provides some tools for how to gather these kinds of data. 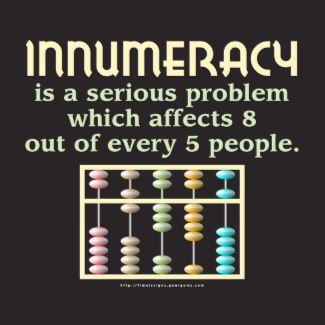 Reuse: This item is offered under a Creative Commons Attribution-NonCommercial-ShareAlike license http://creativecommons.org/licenses/by-nc-sa/3.0/ You may reuse this item for non-commercial purposes as long as you provide attribution and offer any derivative works under a similar license.
In 2013, the Organisation for Economic Co-operation and Development (OECD) released a report drawing on its Survey of Adult Skills, which included numeracy.1Of the 23 OECD nations surveyed for the numeracy skills of adults ages 16-65, Japan, Finland, and Belgium scored highest, whereas the United States, Italy and Spain scored lowest. Among young adults--those ages 16-24--Finland, the Netherlands, and Korea scored highest, whereas Italy, Cyprus, and the United States scored lowest.

Indeed, research has documented a widespread quantitative literacy gap throughout the United States. As Steen (2001: 1-2) has argued,

"Most U.S. students leave high school with quantitative skills far below what they need to live well in today's society; businesses lament the lack of technical and quantitative skills of prospective employees; and virtually every college finds that many students need remedial mathematics. Data from the National Assessment of Educational Progress (NAEP) show that the average mathematics performance of seventeen-year-old students [is] in the lower half of the "basic" range (286–336) and well below the "proficient" range (336–367)."

The 2003 National Assessment of Adult Literacy (NAAL) found that only 13% of adults ages 16 and over demonstrated proficiency in quantitative literacy.2 The QL disadvantage was most evident among females and economically disadvantaged minorities, a finding that is consistent with data showing a mathematical disadvantage among such students. For example, 2009 national data on proficiency in mathematics among 8th grade students reveal that 54% of Asian/Pacific Islander students scored at or above the proficient level, compared to 44% of white students, 18% of American Indian/Alaska Native students, 17% of Hispanic students and 12% of black students (Aud, Fox, and KewalRamani 2010). On a positive note, however, the NAAL found that overall quantitative literacy among adults increased from 1992 to 2003 (Kutner et al. 2007). At the same time, quantitative skills deficits are pervasive in society.

1The Survey of Adult Skills defined numeracy as "the ability to access, use, interpret and communicate mathematical information and ideas in order to engage in and manage the mathematical demands of a range of situations in adult life. A numerate adult is one who responds appropriately to mathematical content, information, and ideas represented in various ways in order to manage situations and solve problems in a real-life context. While performance on numeracy tasks is, in part, dependent on the ability to read and understand text, numeracy involves more than applying arithmetical skills to information embedded in text" (OECD 2013: 75).

2For purposes of NAAL, quantitative literacy was defined as "The knowledge and skills needed to identify and perform computations using numbers that are embedded in printed materials. Examples include balancing a checkbook, figuring out a tip, completing an order form, and determining the amount of interest on a loan from an advertisement" (Kutner et al. 2007: iii-iv).