Provenance: Esther Wilder, Lehman College
Reuse: This item is offered under a Creative Commons Attribution-NonCommercial-ShareAlike license http://creativecommons.org/licenses/by-nc-sa/3.0/ You may reuse this item for non-commercial purposes as long as you provide attribution and offer any derivative works under a similar license.

The Importance of Quantitative Reasoning

Numeracy Outside the United States

An Illustration of What Quantitative Reasoning Involves

6th graders help explain what quantitative reasoning is by eating and rating 4 kinds of apples. They then share out on what other things we can quantitatively reason outside of the math classroom. Hosted by Coco and Jose. Math Practices. Willard Middle School. Berkeley. CA.
https://www.youtube.com/watch?v=12MscqzsYGQ
John Allen Paulos talks about numeracy.

The first known use of the term numerate appeared in the 1959 UK Crowther report when the authors used the term to "coin a word to represent the mirror image of literacy" (Crowther Report 1959: 269). More recently, the 1982 Cockcroft Report elaborated on the meaning of the term: "We would wish the word 'numerate' to imply the possession of two attributes. The first of these is an 'at-homeness' with numbers and an ability to make use of mathematical skills which enables an individual to cope with the practical mathematical demands of his everyday life. The second is an ability to have some appreciation and understanding of information which is presented in mathematical terms, for instance in graphs, charts or tables or by reference to percentage increase or decrease. Taken together, these imply that a numerate person should be expected to be able to appreciate and understand some of the ways in which mathematics can be used as a means of communication." 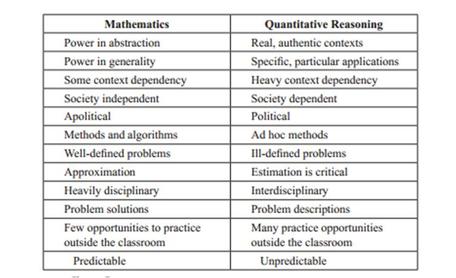 Provenance: Richard Shavelson is the author and he is given credit.
Reuse: This item is offered under a Creative Commons Attribution-NonCommercial-ShareAlike license http://creativecommons.org/licenses/by-nc-sa/3.0/ You may reuse this item for non-commercial purposes as long as you provide attribution and offer any derivative works under a similar license.
Meanwhile, as Madison (2006, as cited in Shavelson 2008: 35) argues, QR is not the same as mathematics as illustrated in the accompanying chart. Indeed, borrowing this perspective, Shavelson (2008: 34) notes that "QR . . . is carried out in real-life, authentic situations; its application is in the particular situation, one dependent upon context including socio-politics. The problems are ill defined, estimation is crucial, and an interdisciplinary approach is needed."

Numeracy is also frequently used interchangeably with such terms as Quantitative Literacy (QL) or Quantitative Reasoning (QR).1 According to the Association of American Colleges and Universities (AAC&U), these terms refer to a "'habit of mind,' competency, and comfort in working with numerical data. Individuals with strong QL skills possess the ability to reason and solve quantitative problems from a wide array of authentic contexts and everyday life situations. They understand and can create sophisticated arguments supported by quantitative evidence and they can clearly communicate those arguments in a variety of formats (using words, tables, graphs, mathematical equations, etc., as appropriate)." Indeed, Bernard Madison (2003: 3) defines QL as "the ability to understand and use numbers and data in everyday life" and Lynn Arthur Steen (2004: 4) describes it as "a practical, robust habit of mind anchored in data, nourished by computers, and employed in every aspect of an alert, informed life." A collection of different views on QL is provided here.

Some of the key skills that make up QL/QR include reading graphical displays, modeling real-world phenomena, solving practical problems through the use of data, justifying conclusions, and critiquing research designs (Johnson and Kaplan N.d.). The Quantitative Literacy Rubric2 (Acrobat (PDF) 103kB Aug28 12) of the Association of American Colleges and Universities (AAC&U) highlights some of the essential skills associated with Quantitative Literacy.

The Importance of Quantitative Reasoning

Quantitative Reasoning (QR)/Quantitative Literacy (QL) skills are essential for social justice: "Without quantitative understanding . . . laypersons may be relatively powerless compared with a small number of individuals with specialized knowledge. . . . Informed political decision-making, retirement planning, active parenting, and the vast majority of choices we make in our personal, occupational, and civic lives can be better served by improved quantitative [reasoning skills]" (Wiest and associates 2007: 47, 53). Indeed, "the scientifically and mathematically illiterate are outsiders in a society in which effective participation in public dialogue presumes a grasp of basic science and mathematics" (Carnevale and Desrochers 2002: 29).

Poor quantitative skills have serious social and economic consequences ranging from faulty decisions and medical mistakes by patients and healthcare professionals (see, e.g., Ancker and Abramson 2012; Cavanaugh et al. 2008; Master et al. 2010; Nelson et al. 2008, Williams et al. 1995) to a judicial system that is fraught with errors (Schneps and Colmez 2013), and everything in between. Paulos (2001: 6) argues that "innumerate people characteristically have a strong tendency to personalize--to be misled by their own experiences, or by the media's focus on individuals and drama." He also points to a belief in pseudoscience as one consequence of innumeracy. While research has shown that many students lack the quantitative skills needed for personal and professional success, this disadvantage is particularly acute among minority students. As Rivera-Batiz (1992: 313) has noted, "low quantitative literacy appears to be critical in explaining the lower probability of employment of young Black Americans relative to Whites."

Just as poor quantitative skills inhibit success, strong ones have an empowering effect. Murnane, Willett, and Levy (1995) found that basic cognitive skills, including the ability to follow directions, manipulate fractions and decimals, and interpret line graphs, have become increasingly important predictors of wages due to rising demands in the labor market. Indeed, quantitative reasoning skills, including the ability to analyze, present and communicate about data are critical for success in today's technologically-oriented and data-driven world. "Work roles in fields as diverse as personnel, city planning, marketing, and welfare administration require the ability to use research by others intelligently, to conduct simple research, and to collaborate with professional researchers" (Markham et al. 1991: 464). It is not surprising that numeracy has been closely linked to economic performance (Robinson 1995).

Numeracy Outside the United States

Numeracy is increasingly being seen as an essential Adult Basic Education (ABE) skill and quantitative reasoning is increasingly being promoted by various governments and national organizations in countries such as Canada, New Zealand, and the United Kingdom. There is also a rich body of literature on these initiatives at other countries, some of which is referenced on our link to resources on national initiatives to promote numeracy. 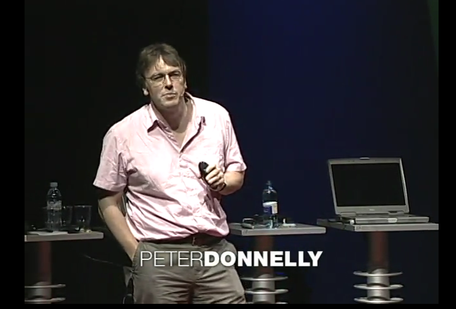 ×
Peter Donnelly talks about how juries are fooled by statistics.
https://www.youtube.com/watch?v=rds6zU1wKrg
Kurt Vonnegut discusses the shapes of stories.
https://www.youtube.com/watch?v=4h3J0Sf1aFo
John Allen Paulos speaks about probability and religion.
http://vimeo.com/33930809
A panel discussion on quantitative literacy from the Quantway™ and Statway™ 2011 Summer Institute. Hosted by Rebecca Hartzler, senior associate of the Carnegie Foundation and introduced by Jane Muhich, director of Quantway™and productive persistence at the Carnegie Foundation. Panelists include: Bernie Madison, University of Arkansas; Eric Gaze, Bowdoin College; and Caren Diefenderfer, Hollins University
Bernie Madison speaks about the importance of Quantitative Reasoning. .

Powers of Ten "takes us on an adventure in magnitudes. Starting at a picnic by the lakeside in Chicago, this famous film transports us to the outer edges of the universe. Every ten seconds we view the starting point from ten times farther out until our own galaxy is visible only as a speck of light among many others. Returning to Earth with breathtaking speed, we move inward- into the hand of the sleeping picnicker- with ten times more magnification every ten seconds. Our journey ends inside a proton of a carbon atom within a DNA molecule in a white blood cell. POWERS OF TEN © 1977 EAMES OFFICE LLC (Available at www.eamesoffice.com)."
"This is an animation created by The Danse. It gives the viewer an idea of exactly how much a trillion dollars is."

1It should be noted that some researchers and educators argue for a distinction among various terms including Quantitative Literacy (QL), Quantitative Reasoning (QR), and Statistical Literacy. For example, Powell and Leveson (2002) defined quantitative literacy (QL) as "a basic familiarity with numbers, arithmetic and graphs. As in English Literacy, it involves an understanding of the basic rules (grammar) of the language, in the case of mathematics, and an ability of manipulate numbers." In contrast, they define quantitative reasoning (QR) as "the application of logic to problems and the ability to understand the real world meaning of numbers and mathematical statements." They further argue, "In our opinion, the concepts of quantitative literacy (QL) and quantitative reasoning (QR) are end-members of a continuous spectrum of quantitative concepts." Statistical literacy, on the other hand, may be defined as "understanding the basic language of statistics (e.g., knowing what statistical terms and symbols mean and being able to read statistical graphs), and understanding some fundamental ideas of statistics" (Aliaga et al. 2010: 14).

2Reprinted with permission from Assessing Outcomes and Improving Achievement: Tips and tools for Using Rubrics, edited by Terrel L. Rhodes. Copyright 2010 by the Association of American Colleges and Universities.

Carnevale, Anthony P., and Donna M. Desrochers." 2003. "The Democratization of Mathematics." In Quantitative Literacy: Why Numeracy Matters for Schools and Colleges, edited by Bernard L. Madison and Lynn Arthur Steen. Princeton, NJ: National Council on Education and the Disciplines. Pp. 21-31.

Cockcroft Report. 1982. Crown copyright material is reproduced with the permission of the Controller of HMSO and the Queen's Printer for Scotland. Pg. 11.

Crowther Report. 1959. Crown copyright material is reproduced with the permission of the Controller of HMSO and the Queen's Printer for Scotland. Pg. 269.

Murnane, Richard J., John B. Willett, and Frank Levy. 1995. "The Growing Importance of Cognitive Skills in Wage Determination." The Review of Economics and Statistics 77(2): 251-266.

Rivera-Batiz, Francisco L. 1992. "Quantitative Literacy and the Likelihood of Employment among Young Adults in the United States." Journal of Human Resources 27(2): 313-328.