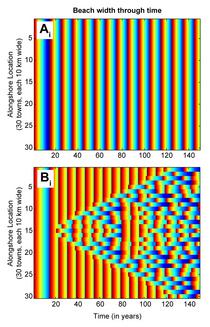 Hide
Figure 2. Results from a coupled beach-economics model. Plots (Ai) and (Bi) show beach width for a plan-view series of coastal towns (vertical axis) over time (horizontal axis). Hot colors indicate a wide beach, and cool colors a narrow beach. When all towns replenish their beaches in unison (Ai), the system is stable, and all towns share the same optimal recurrence interval. When towns replenish out of sync (Bi), the system destabilizes such that no town can establish a recurrence interval for replenishment that optimizes their net benefits. Figure after Lazarus et al. (2011). Details

Beach replenishment (also called "beach nourishment") is an engineering strategy commonly used on sandy shorelines where erosion threatens coastal property and infrastructure. The process involves extracting sand from a source area and delivering it to where the shoreline is actively eroding. Replenishment is considered a "soft" alternative to the construction of "hard" coastal structures such as groynes, seawalls, and rock revetments. Unlike these structures, which are effectively permanent, beach replenishment is transient, requiring periodic deliveries of fresh sand. Why would coastal managers choose a temporary solution over an apparently more lasting one? Because hard structures built to forestall coastal erosion tend to prevent sand from accumulating in front of them -- and on developed shorelines, sand is worth money.

A beach in a tourist town is an example of a landscape with "natural capital." Essentially, the width of the beach has an economic value. Economists have shown that valuation of beach width is rather like Goldilocks and the Three Bears: beaches that are too narrow or too wide are less desirable (and therefore less valuable) than beaches that are somewhere in between. Beaches that are "just right" attract more beach-goers, who need food to eat and hotel rooms to sleep in; people want to buy houses near the beach, pushing up real-estate values. However, shorelines are dynamic, with natural changes in accretion and erosion that cause beach width to fluctuate. If a natural trend in shoreline position is predominantly erosive, then coastal managers may opt for beach replenishment as a mitigation strategy. Developed coastal areas can thus exhibit a strong relationship between shoreline change and economic dynamics, comprising a coupled human–landscape system in which beach replenishment is the link between the economics of coastal development and the physical processes of shoreline change.

Consider the following cycle (Fig. 1). A town's beach is eroding, and the town manager organizes a beach replenishment project -- a huge undertaking that requires permitting, environmental-impact assessments, contractors, equipment, materials, and millions of dollars. Sand is delivered to the eroded beach via dredges, pumps, and trucks; excavators and bulldozers shape it to a desired width. But wave action and gravity rework and redistribute the newly added sand until, a few years later, erosion once again threatens shorefront development, necessitating another round of replenishment. Some beach-replenishment project plans have 50-year timelines to account for repeated rounds of sand delivery and maintenance.

Economic analyses of coastal U.S. towns suggest that a cost-benefit calculation based on erosion rate, property value, project costs, and finance gives an optimal frequency for replenishment projects -- a recurrence interval that maximizes the net benefits (benefits minus the costs) a town can expect to derive from beach replenishment over time. This economic model is designed for a single town in isolation, one that acts without considering how its neighbors might manage their beaches. In the U.S., in particular, this kind of management is standard practice. However, few neighboring coastal towns are truly isolated from each other, especially when they share the same physical setting and sediment transport pathways. What happens when a landscape-management practice designed for isolated implementation operates in a physically integrated environment?

Results from a numerical model designed to explore this question suggest that one town's beach conditions -- and therefore its management decisions -- depend on the management decisions of its neighbors (Fig. 2). With different towns replenishing their sections of shoreline at different times, and with the physical system sharing sand among neighboring towns via alongshore sediment transport, a given town's information about its shoreline-change conditions becomes imperfect and unpredictable. One implication of this beach-width interdependency is that no town can use a blinkered decision-making strategy and still act in an economically optimal way.

Observational and empirical evidence suggests that in the U.S., uncoordinated management practices among neighboring beach towns remains the rule, not the exception. The Netherlands, by comparison, represents the opposite approach: shoreline change and beach replenishment is monitored and managed at a national scale in an effort to hold the Dutch shoreline at its 1990 position. Worldwide, the costs of shoreline management are rising and expected to rise further with climate-change-related impacts. Whether U.S. locales will begin to adopt more cooperative strategies in the future remains to be seen.

« A sediment budget for an area of sugarcane cultivation on the Herbert River floodplain, NE Australia       Adding up the change: capturing the cumulative effects of dynamic shorelines »