Adding up the change: capturing the cumulative effects of dynamic shorelines 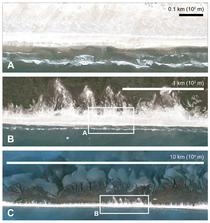 Hide
Figure 1. Aerial views of the same beach at increasing spatial scales. Different physical processes are relevant to shoreline changes at the scale of each panel: (A) wave swash; (B) sandbars and surf-zone currents; and (C) gradients in alongshore sediment transport. (Background images courtesy of Google Earth.) Details 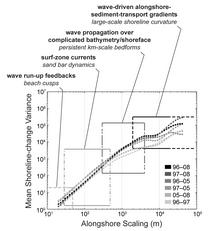 Dynamic as sandy shorelines are, some changes in shoreline morphology last longer than others. Visit a beach before and after a stormy weekend and you can appreciate the volume of sand that an energetic weather event can move: what was a broad, sloping beach before the storm might look excavated and flat afterward. But how long do these changes last? In a few weeks time, you may find the beach again recharged with sand, evidence of the storm effectively erased. Do short-term changes like these bear any relationship to changes in shoreline position over longer time scales?

Insight into why some reaches of shoreline erode while others accrete is a fundamental question in coastal geomorphology. When investigating the physical processes that drive patterns of shoreline change, scale matters. Signatures of different physical processes get embedded in records of shoreline change, but revealing them depends on measuring the right spatial and temporal scales. Imagine taking a walk -- perhaps a very long walk -- along a beach (Fig. 1). On the scale of 10–100 m, the beach morphology you cross is largely a function of wave swash. Where the waves are running up the beach, shapes in the sand form, obliterate, and reform rapidly. The amount of change those shapes exhibit (their variance) is small relative to the total size of the beach. On the scale of 100–1000 m, changes in shoreline position are larger, and shoreline shape may be related to wave-driven currents and sandbars in the surf zone, the area close to shore where waves are breaking. Walk a few kilometers and you might be aware of having followed subtle but noticeable undulations in the shoreline. Shoreline changes at this multi-kilometer scale tend to derive from gradients in wave-driven transport of sediment alongshore. On stretches of shoreline where more sand flows in than flows out, the shoreline accretes; where more sand flows out than flows in, the shoreline erodes. Such changes are typically slow, but cumulative. They can even reflect aspects of the regional-scale coastal environment, such as prevailing weather patterns.

One tool capable of accurately measuring shoreline position over long distances is lidar (an acronym for 'light detection and ranging'), an instrument that uses a laser to map topography from a low-flying aircraft. Lidar surveys are especially useful for their high-resolution geospatial data. However, a survey is only a snapshot of the coast at a particular moment in time. Furthermore, because lidar data are expensive to collect, surveys tend to be flown infrequently -- annually at best. They provide poor temporal constraints on fine-scale changes that only more frequent recording can capture. For example, the rate at which beach features change at spatial scales smaller than 100 m is significantly faster than the interval between most lidar surveys. At larger spatial scales, however, comparisons of shoreline surveys repeated over several years can yield intriguing patterns of change (Fig. 2). At spatial scales of a few hundred meters and smaller, the shoreline exhibits the same degree of change (the same variance) regardless of whether the surveys are taken a few months or several years apart. At spatial scales of a few kilometers, shoreline position shows little variability from year to year but significant changes emerge from records spanning a decade or more.

This spatial-temporal relationship has important ramifications for observing and quantifying shoreline change. Wave-swash processes can have dramatic short-term effects, but they exert limited influence on long-term shoreline change compared to the processes operating at larger scales, such as gradients in alongshore sediment transport. Ultimately, the signatures of sediment-transport dynamics that a coastal geomorphologist is able to record depends on the spatial and temporal scales preserved in her or his shoreline measurements. If you are that geomorphologist, ask yourself: do you have the vantage, in space and time, to see evidence of the dynamics you are looking for?