A sediment budget for an area of sugarcane cultivation on the Herbert River floodplain, NE Australia

Fleur Visser
University of Worcester, Institute of Science and the Environment
Author Profile

Hide
Figure 1. Effective presentation of a sediment budget as a flux diagram, showing sediment sources, sediment sinks and total outflux of sediment from the studied area (after Trimble’s diagram for Coon Creek, US, 1999). Details 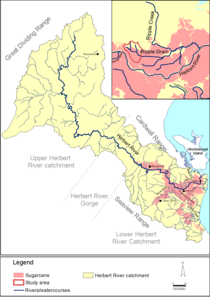 Hide
Figure 3. Example of severely eroded stretch of headland. Headlands are wide strips of land between sugarcane fields and drains, which allow access to the fields. Tape measure = 50cm. Details

Hide
Figure 4. Eroded surface with two pins to measure and monitor surface level change (surface area shown in photo is approximately 0.25m2). An increase in distance from top of pin to soil surface indicates erosion. A decrease indicates deposition. The washer around the pin facilitates the measurements. Details 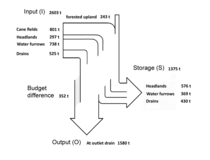 Hide
Figure 5. Final sediment budget for the 1999-2000 wet summer season, indicating sources and sinks of sediment, as well as input of sediment from external sources and the total output from the study area. The budget difference will result from measurement uncertainty. Details

While demand on food production is growing, agricultural land is becoming increasingly less productive because of the erosion of fertile topsoil. The effects of soil erosion, however, go beyond the loss of fertile land. Eroded sediment can cause siltation and pollution of water bodies downstream from the erosion sources. In tropical northeastern Australia very high intensity rainfall makes cultivated land particularly prone to soil erosion. One of the most important field crops grown in the Australian tropics is sugarcane. Much of the sugarcane cultivation land is situated in low-lying coastal areas, which are floodplains of large river systems that drain into the Great Barrier Reef. The sugarcane industry is therefore situated adjacent to the many coastal and freshwater ecosystems that play a role in the survival of the Great Barrier Reef, which makes the quality of drainage water from the cane fields a matter of concern. In order to take effective soil conservation measures and reduce soil loss, it is essential to understand which parts of the sugarcane cultivation landscape are significant sources of sediment and which are areas of sediment deposition, or 'sinks'.

Erosion, deposition and transport of sediment form a system that can be described by the following mass balance equation (Roberts and Church, 1986; Slaymaker, 1993; Brunton and Bryan, 2000): I - ΔS = O in which O is the output of sediment (the yield) from the studied catchment, I is the input of sediment from erosion sources and ΔS is the change in amount of sediment stored in the catchment. Budget components I and ΔS can represent a range of sources and sinks depending on the processes acting in a particular catchment. A more effective way to present a sediment budget is to use flux diagrams (Trimble, 1999; Walling et al., 1998). This type of presentation (Fig. 1) allows a quick assessment of the relative quantitative importance of sources and sinks, and can give some information on the spatial arrangement in a landscape of sediment sources and sinks.

A sediment budget is only valid for the period of time over which the data was collected. This is clearly illustrated by Jordan and Slaymaker's development of a sediment budget for the Lillooet River (Jordan and Slaymaker, 1991). They found that sediment supply in the catchment was highly episodic over time scales ranging from centuries to thousands of years. During the Holocene, sources of sediment varied widely with periods of volcanism, large landslides, the retreat of glaciers from the Neoglacial maximum, and recent river engineering works alternately supplying material. In some cases, parts of a landscape can even change from a sediment source into a sinks or vice versa. A study in the Coon Creek catchment in Wisconsin (USA) by Trimble (1981, 1999) showed that a reduction of erosion by 75% in the catchment upland as a result of improvements in agricultural land management had no effect on the catchment yield. The reduction in sediment production was compensated by changes in erosion and storage processes elsewhere in the catchment. For example creek tributaries turned from a significant sediment source into a net sediment sink. This may have been partly due to stabilization of the tributary stream-bank structures, but also due to them becoming wider and shallower with larger floodplains after the initial period of erosion. This change in morphology and related vegetation development may have turned the tributaries into more effective sediment traps.

In order to find out what the most important sources of sediment are on land used for sugarcane cultivation on the large river floodplains in northeastern Australia, a sediment budget study was done for a part of the Ripple Creek catchment, which is a sub-catchment of the Lower Herbert River in North Queensland (Fig. 2). In a river catchment, floodplains are usually considered to be sediment sinks (areas that collect sediment) rather than generate it (Schumm, 1977; Alexander and Marriott, 1999). This contradicts the assumption about sugarcane land--that it is a source of sediment. The original floodplain landscape, however, has been substantially modified to make it suitable for sugarcane cultivation. The floodplains now comprise a number of specific landscape 'elements' that all have the potential to be a sediment source, as well as a sink. The four landscape elements considered in this study are: cane fields, water furrows (shallow in-field drainage structures), headlands (access and turning space along fields, see Fig. 3), and drains.

To compose the sediment budget, total amounts of sediment generated from and stored in each landscape element have been quantified and compared with the output of sediment from the catchment. Input from, and storage on headlands, drains and water furrows, was estimated from erosion pin measurements (see fig. 4) and surface profile measurements. Input from forested upland, input from fields, and the output at the outlet of the catchment was estimated with discharge and suspended sediment concentration data from gauged streams and flumes. Data for the sediment budget were collected during two wet-seasons: 1999-2000 and 2000-2001. The results indicate that the 536 ha tropical floodplain area is a net source of sediment. In the 99-00 season 1580 tonnes of sediment left the study area. The contribution from the 320 ha area of cultivated lowland was 4.9 t ha-1. In the 00-01 season the total output from the area was 1120 tonnes, or 3.5 t ha-1 from sugarcane land.

Figure 5 presents a diagram of the 99-00 sediment budget, which indicates the relative importance of each landscape element as sediment source or sink and the difference between sediment input minus storage and sediment output from the catchment. The study identified the following sources and sinks: 1) Cane fields were the largest net source of sediment during the 1999-2000 season--in particular those with first year crops, which do not yet have a protective 'trash' cover of tops and leaves left behind after previous harvests of cane stalks. 2) Sediment input from water furrows was higher, but there was also considerable storage of sediment in this landscape element. 3) Headlands tend to act as sinks when covered with sufficient vegetation. 4) The source or sink function of drains is less clear, but seemed to depend on their shape and vegetation cover.

The observation of a floodplain as net source of sediment contradicts the general understanding that floodplains store sediment. Under specific conditions, however, erosion can occur on floodplains. The tropical rainfall and flood conditions on the Ripple Creek floodplain and the modification of the floodplain surface for the cultivation of sugarcane provide such conditions. Cultivation has lowered the resistance of the surface, an increased drainage network has increased the drainage velocity, and flood control structures have altered flooding patterns. During the observed period only sediment-poor runoff from local forested hill slopes and heavy rainfall was present on the floodplain, resulting in erosion of the surface. In the longer term, larger flood events, involving sediment-rich floodwater from elsewhere in the Herbert River catchment, may lead to different erosion and deposition processes. When this water can flow onto the floodplain during larger flood events, the area may become a sediment sink.

In conclusion, this study has shown how modification of a tropical, high-rainfall environment for cultivation makes it susceptible to soil erosion. Bare fields and water furrows are particularly important sources of sediment. Management practices that reduce erosion from these elements could be adapted to reduce sediment export from sugarcane land. Longer term budgets, however, need to be determined to better understand the further development of this cultivated floodplain area.