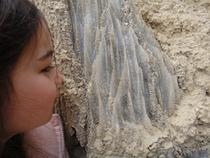 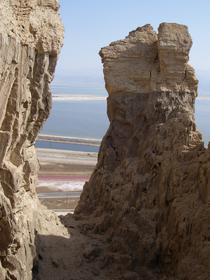 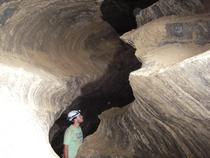 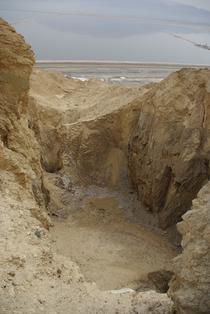 A unique, rapidly evolving karst landscape is described below. It develops on salt rock (halite) at such a rate that a human lifetime is enough to observe considerable geomorphic variations.

Halite is the most soluble common mineral on Earth's surface. Salt (halite) karst deals with extremely soluble and erodible rock-salt geomorphology, which demonstrates a rapidly developing end-member of karst processes. Salt outcrops are rare due to their high solubility. Most salt outcrops appear in desert environments, where the salt mass escapes total dissolution. In such outcrops, runoff produces well-developed karst terrains, with features including karren, sinkholes, and vadose caves. Today the known salt outcrops are probably no older than Pliocene, but the known well-developed salt karst systems are of Quaternary age.

A salt outcrop is commonly the topmost manifestation of a diapir (upward intrusion of a mobile, ductile material into brittle overlying rocks) extruding to the surface. Deeply buried salt can be also exposed by tectonic and denudational processes which act upon other rocks too.

Salt diapirs are exposed at the surface depending largely on climate and uplift rate. Subaerial karst features may develop as soon as the salt breaks the surface, and continue forming during the entire activity of a diapir, especially under arid climates. Alternatively, if subrosion (wide-spread dissolution below surface) and denudation are faster than uplift rate, all the salt is consumed prior to emergence above ground surface, thus hardly any karst relief will develop, except subsidence of overlying sediments. This is often the case under wet climates where fresh groundwater circulation is active.

When salt rises to the surface, it is commonly covered by a residual caprock and other sediments. Along the edges of plateaus, and on steep slopes, the caprock may be missing and salt will be exposed. In this case, surface karst features will develop, such as rillenkarren (Fig. 1). These features form on bare rock slopes by rainfall and associated runoff. They are tightly packed, 1-2 centimeters wide, with sharp-edged parabolic cross section. <a>Salt rillenkarren ridges</a> are commonly sharper than limestone rillenkarren, and they often grade into a planar solution surface. The remaining residue of impute rock salt is carried downslope by runoff. Sub-horizontal portions of the slopes tend to accumulate this residue, which, according to its thickness and areal distribution, may protect the salt from further dissolution.

Larger forms, such as pinnacles and stone forests, are rare in salt because protruding, sharp salt pinnacles tend to dissolve rapidly. An intensive survey of the surface of Mt. Sedom revealed only one large salt pillar, known as 'Lot's Wife', which is preserved due to its caprock cover, and is detached from its neighboring salt mass by an unroofed cave (Fig. 2). The biblical reference to the pillar of salt may be one of the earliest written observation of a karst feature (Genesis 19:26).

The evolution of salt escarpments is controlled by a combination of salt tectonics, dissolution, and gravitational mass-movement. In vertical walls, particularly at cave openings, salt blocks often break down, and are soon consumed by meteoric water if they are exposed.

As soon as a salt mass crops out above local base level and runoff water can reach the salt, vadose caves develop rapidly due to the high solubility and erodibility of the salt. Salt caves have been reported from Israel, Iran, Chile, Romania, former USSR, and Algeria. Mt. Sedom diapir in Israel has some 120 studied vadose caves with ~20 km total length of passages.

Similar to other stream caves, the horizontal pattern of a salt cave is linear and dendritic (branchwork), collecting water from input stream sinks (the point where a surface stream flows into the sub-surface). A vadose canyon is common along the stream passage (Fig. 3). The Malham Cave has five main ephemeral channels, all draining out through a single outlet. It is currently the longest known salt cave, with 6.7 km of passage length, and 25 entrances, including swallets, outlets, and various shafts. In the thirty years since its discovery, the cave's solutional morphology has changed and new passages have become accessible at its northern, upstream part.

Total dissolved load in flood flow increases dramatically within the caves, from ~10 g/l at stream sinks up to 200-300 g/l where good water-rock salt contact is achieved. Solute concentration, mainly NaCl, depends primarily on the residence time of the water in the cave, where good contact with rock salt may occur. Flood waters passing rapidly through a cave systems do not reach saturation, whereas waters infiltrating through tight fissures or held up in subsurface ponds reach saturation in a few hours or days.

Mass-balance calculations in a cave passage in rock salt yielded downcutting rates of 0.2 mm/s during peak flood conditions, about eight orders of magnitude higher than reported rates in any limestone cave streams. However, flash floods are rare in Mt. Sedom, so long term downcutting is ~2 cm/yr.

Most cave canyon bottoms are shielded by less-soluble sediments, reducing the rate of entrenchment. These sediments are derived from surface materials carried by flash-floods into caves. Much of the flash-floods bedload is usually deposited at the bottom of stream sink shafts, where the stream slope decreases abruptly. However, a flash flood can also undermine an unstable pile of collapsed rubble within a cave, dramatically increasing the clastic load of the flow. In this case the flow can be dense and highly viscous, often becoming debris flows. In Sedom Cave, such flows were observed carrying boulders ~1000 kg in weight, depositing them at the alluvial fan outside the cave. The clastic load coupled with energetic turbulent flow promotes physical erosion of the salt, adding to the rapid dissolution. Collapse is common due to the rapid cave development. When the collapse reaches the surface, large dolines (closed depressions of karst origin) may develop, particularly close to swallets (Fig. 4).

Known salt caves are within the range of radiocarbon dating (this range is up to ~50,000 years). Under dry and salty desert conditions, organic matter deposited in the caves is well preserved for thousands of years, and can be used to date speleogenesis (cave formation) and paleoenvironmental variations.

The oldest salt cave known today is Lashleshet Cave in Mt. Sedom, radiocarbon dated to ~8000 yr. Mt. Sedom relief started to develop during the latest Pleistocene, when the southern part of the diapir extruded above Lake Lisan and its associated water table. However, subrosion of the upper part of the diapir, turning salt into solutes and residual caprock, started already during the mid-Pleistocene.

In conclusion, salt karst evolves so rapidly, that even under hyper-arid climate it develops faster than most humid limestone karsts. Salt karst terrains are also rapidly destroyed, so existing ones, such as Mt. Sedom, are geologically young.

« Adding up the change: capturing the cumulative effects of dynamic shorelines       Precipitation and debris flows in the Adirondacks »