Precipitation and debris flows in the Adirondacks 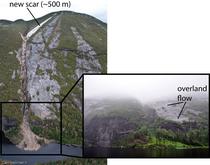 Hide
Figure 2. Trap Dike, on the edge of Mount Colden, is gully formed by preferential erosion of a basaltic dike. It has experienced repeated debris flows. Several months prior to Hurricane Irene, the debris cone at the base of Trap Dike was thickly vegetated. After the hurricane, a new slide scar formed, and the debris flow scoured vegetation from its path. The new slide is whiter in color because fresh bedrock was exposed. (Photo by Carl Heilman II. Used with permission.) Details

Hide
Figure 3. Eagle Slide on Giant Mountain. The slide formed at the head of the Roaring Brook, in the most concave part of the valley. Smaller slides are visible on the valley walls. Lichen is beginning to cover the rock. Details

In the Adirondack Mountains in New York State, slide scars are distinctive features of the landscape. These scars are usually long, narrow exposures of bedrock on steeper slopes that form when debris flows scour soil and regolith. These flows are more appropriately called debris avalanches in cases where they are unconfined by channels. Adirondack slide scars stand out because even the highest mountains are covered with dense spruce and fir forests. Skiers prize the scars as natural pistes in the backcountry, and hikers appreciate the spectacular views they offer. The debris flows that create the scars threaten roads and houses. Sediments transported by debris flows are also potentially important sources of pollution in mountain streams.

Although the formation of slide scars is certainly linked to intense precipitation, it remains unpredictable and poorly understood. This is partly because observations are extremely difficult to make. The scars and their associated sediment lobes, sometimes deposited at significant distance from the base of the scar, clearly point to the entrainment of the entire soil column and transport in a fluid-like manner. However, the actual initiation of scar-forming debris flows is rarely observed in nature. They likely occur during storm events with return times of 100 years or more—far too intense for comfortable, or even just safe, observation. They are also extremely local features. Even a determined observer or instrument network would be lucky to be in the right place at the right time.

Most of what we know comes from observation of scars after the fact, as well as theoretical calculations and laboratory experiments. Aerial photography shows 400 to 500 slide scars in the Adirondack High Peaks. They typically occur in shallow soil (< 1 m) on slopes between 25° and 40°. Local relief is important. In the Adirondacks, slide scars only occur where there is at least 400 m of valley-to-peak relief within a 20 km2 area. Slide scars are always present where local relief exceeds 900 m.

On August 29, 2011, the remnants of Hurricane Irene delivered 5 to 10 inches of rain to the eastern Adirondacks (Fig 1). Towns throughout the lowlands experienced record flooding. In the mountains, at least 20 scars were created or extended by the storm, including scars on Wrights Peak, Mount Colden, and Saddleback Mountain (Fig. 2). Most of these occurred on steep backcountry slopes and their debris flows did not damage much property. The total number of slide scars in Adirondack Park is only 400 to 500, however, so this storm did have a significant impact on the upland landscape.

In the eastern United States, roughly 5 inches of rain per day appears to be a minimum for initiating scar-forming debris flows, although the local variability of mountain weather makes it difficult to pin down this number precisely. Atlantic hurricanes and tropical storms are most often associated with this much precipitation, but intense thunderstorms can also achieve it: a major scar formed on Giant Mountain in 1963 when a rain gauge in an adjacent valley recorded 4 inches of rain during a local thunderstorm.

Two other observations suggest an important role for groundwater. First, scar-forming debris flows are most commonly initiated in the heads of valleys, hollows, and other topographic concavities (Fig. 3). They are less common on ridges, interfluves, and planar valley walls. This suggests that debris flows initiate at locations where groundwater flow converges, perhaps in seeps or springs. Second, upland soils in the Adirondacks are usually highly permeable and rich in organic material, but they lie on competent, glacially-scoured bedrock that is highly impermeable, further increasing the potential for focusing groundwater flow.

All of these observations are consistent with mathematical models of hillslope failure. The strength of upland soils largely depends on the friction between grains. (Organic rich sediments and soils have low cohesive strength.) Friction depends on normal stress—the force per unit area, oriented perpendicular to a surface, usually due to the weight of overlying material. Soil will slip when the shear stress exceeds normal stress along a plane of weakness. This condition is called Coulomb failure. One way to decrease normal stress is to increase water pressure in pore spaces by convergent groundwater flow. Higher water pressure supports the weight of the soil (separates the grains so friction does not hold them together) and may allow it to slip. Once the soil slips, even a small failure can grow. When a hillslope is saturated with rainwater, near the point of Coulomb failure, small soil slumps can mobilize much larger volumes of sediment, transforming themselves into fast-moving debris flows.

Adirondack slide scars record an unusual type of erosion. Geomorphologists typically consider massive, soil-stripping erosion events to occur exclusively in denuded landscapes like clearcut slopes. In contrast, slide scars show that even densely forested slopes are susceptible to debris flows and avalanches, at least where soils are thin. A single precipitation event like Hurricane Irene may displace tens of tons of sediment per square kilometer of slide. Once a slide scar forms, it heals quite slowly. The 1963 slide on Giant Mountain is only beginning to acquire a coat of lichen. Moss, soil, and trees are yet to come.