Hide
Figure 1. Diagram illustrating the morphological evolution of cinder cones over time. A. Primary shape at time of eruption. B. Degraded morphology over time due to surface erosion and mass transport. Details 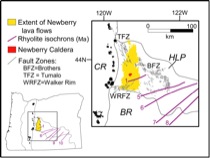 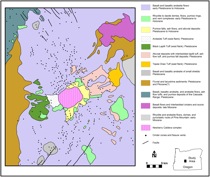 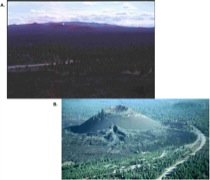 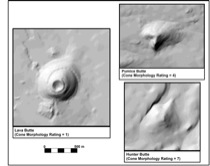 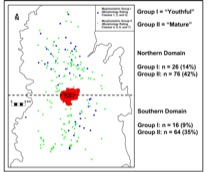 Surface landforms result from a balance of constructional and erosional processes operating at geological time scales of 102 to 105 years. The landscape evolves over time as masses of earth material are transferred at or near the surface under the influence of dynamic forces (e.g. sweeping winds, flowing water, moving glaciers, tectonics). The sources of energy that drive geomorphic work and mass transfer include gravity, heat from the sun and geothermal energy. The shape, size and composition of landforms at any given time are the result of the interplay between the driving forces and resisting materials.

In volcanic landscapes, conical edifices are constructed by pipe-like vent eruptions of lava and pyroclastic materials, with subsequent erosional modification over time (Figure 1). The morphology of the resulting landform is a function of primary volcanic processes and time since eruption. Cone degradation models demonstrate that as cone age increases, cone slope (Sc), cone height (Hc), and cone height-to-width ratio (Hc/Wc) decrease, respectively (Figure 1). Cones change shape over time by erosion processes, with mass transfer from hillslope to cone margins. The net result is reduction of cone height and slope through time, coupled with the loss of crater definition.

Newberry Volcano is located near Bend, Oregon (Figure 2). With an estimated volume of 450 cu. km, Newberry is one of the largest Quaternary volcanoes in the contiguous United States. It has as an elongated shield-form that extends 60 km north-south and 30 km east-west. The summit is marked by a caldera that is 7 by 5 km across (Figures 2 and 3). Newberry is positioned at the juncture of several major faults, including the Brothers, Tumalo and Walker Rim fault zones. This broad shield complex is associated with over 400 basaltic cinder cones and numerous silicic deposits, all less than 600,000 years in age (Figures 3 and 4). The most recent silicic eruption occurred approximately 1300 years ago in the caldera zone. Geologists are interested in studying Newberry because of its youthful age, the potential for volcanic risk to local communities and geothermal energy development. The large number of cinder cones provides an important geologic framework from which to conduct morphometric analyses, apply erosional degradation models, and decipher controls on eruptive processes.

Cinder cones are most abundant on the north and south flanks of Newberry, less common on the east flank, and uncommon on the west flank (Figure 3). Geologists at the U.S. Geological Survey and U.S. Forest Service have identified three broad structural zones based on cinder-cone mapping patterns. On the south flank, the cones display a conspicuous north-northeast trend, co-linear with the Walker Rim fault zone (Figure 3). On the north flank, the cones form a wider north-northwest trending array that parallels the Tumalo fault zone. Some on the north flank also display curved arrangements parallel to caldera walls and are presumably related to local stresses within volcano (Figure 3). Newberry cone and vent alignments are interpreted to represent the surface expression of intrusive feeder dikes at depth. Geologists working at Newberry have also hypothesized that north-northwest trending cones and fissure vents are relatively younger than those trending north-northeast. While numerical age dating of cinder cones and related lava flows provides the best data to constrain the history of basaltic eruptions at Newberry, only 12 of the 400 aforementioned cones have been successfully tagged with an absolute age. Application of numerical dating techniques is elusive and expensive to perform. Analysis of cinder cone morphology offers a cost-effective relative age-dating technique that can further understanding of the volcanic history at Newberry.

Faculty and students at Western Oregon University (WOU) used geographic information systems (GIS) to compile cone morphology data from digital geologic maps and 10-meter elevation models (DEM). A select set of Newberry cinder cones (n = 182) were analyzed by measuring a suite of morphologic parameters to quantify crater definition and shape. The sample population was selected on the basis of the following criteria: (1) basaltic cinder cones ("Qc") as mapped by the USGS, (2) single cones that are not part of a fissure-vent system, (3) intact cones that do not appear to be topographically breached or covered by younger lava flows, and (4) cones that are clearly separated from nearest neighbors (e.g. Lava Butte, Figure 4B). Based on visual inspection of shaded relief maps, each cone was qualitatively ranked with a classifier ranging from 1 (well defined cone-crater morphology) to 7 (very poorly defined cone-crater morphology) (Table 1, Figure 5). Measured morphometric data include cone height (Hc), average cone slope (Sc), and height:width ratio (Hc/Wc).

Results from the GIS analyses indicate that there are two distinct morphologic populations of cinder cones at Newberry (Table 2, Figure 6). Based on comparison with similar studies at other volcanic fields, these data suggest that cones included in morphometric Group I are relatively "youthful" compared to those in Group II, which are relatively "mature". As such, Group I Sc and Hc/Wc values average 19-20 degrees and 0.19, respectively, while Group II averages 11-15 degrees and 0.14. By comparing Newberry data with numerically-calibrated cone morphology studies in Arizona, the results imply that both Group I and Group II cones fall within a "Holocene-Latest Pleistocene" age category. Map distribution of the morphological classes (Figure 7) indicates that both the north-northwestern and south-southeastern portions of Newberry are associated with the highest occurrence of youthful cones, the former (N-NW) associated with the greatest number (14% of cones analyzed). The southwestern region is characterized by cones of mature morphology and a noted absence of Group I cones.

Based on comparison with the 12 numerically dated cinder cones at Newberry, it is uncertain if the morphometric groupings delineated in this study are purely a function of age differences (i.e. erosional processes over time) or a combination of other variables such as climate, post-eruption cone burial, lava composition, and episodic ("polygenetic") eruption cycles. Further radiometric and geomorphic dating studies will be required to definitively decipher the factors controlling the two morphometric groupings identified in this work.

Central Oregon is a dynamic landscape associated with active volcanism. Rapid population growth, land development, and natural resource planning are at the forefront of public policy decisions currently being considered at the local, state and national levels. The understanding of the distribution and timing of volcanic activity at Newberry Volcano is important for both hazards mitigation planning and geothermal energy exploration. When and where will the next eruptions occur? How often do they happen? What are the risks to local communities? Where are the areas of high geothermal heat flow? How deep are they and how might they be capitalized to satiate the growing energy demands in the western U.S.? All are questions that have social significance and geoscientists are critical contributors to the conversation. The geomorphic study of Newberry cinder cones is an important piece of the puzzle.