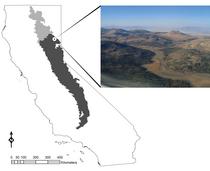 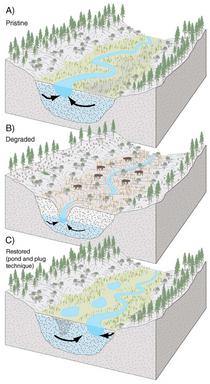 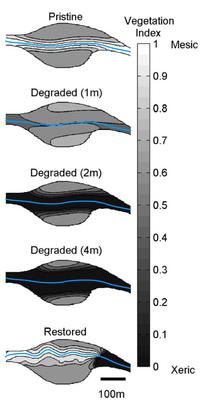 The Connection Between Groundwater and Stream Channels: When considering the water cycle of a watershed, stream valleys represent a zone where terrestrial and aquatic ecosystems interact through the exchange of water, nutrients, and energy. A relatively shallow water table across stream valleys typically intersects the stream water surface and leads to a situation where groundwater and surface water are intimately linked. One way in which changes in streambed elevation relative to floodplain elevation can lead to cascading effects on adjacent ecosystems is by impacting soil water availability. An incising streambed leads to a lower stream surface elevation, which then leads to a reduction in the water table elevation. A lower water table results in reduced water availability in the root zone and, typically, a transition to plant communities more adapted to dry conditions. Many examples of this phenomenon exist in the wet meadows of the Sierra Nevada and southern Cascade ranges in California, USA (Loheide et al. 2009), where channel incision has occurred over the last 150 years (Figure 1).

Causes of Stream Channel Incision: The causes of the channel incision include changes to the streamflow regime, overgrazing, mining activities, road/railroad construction and channelization/drainage activities. Increased peak stream discharge has mostly been a consequence of changes in land use following Euro-American settlement in the mid-1800s but may also be related to changes in climate (Germanowski and Miller 2004). Overgrazing by sheep and cattle was very common throughout the Sierra Nevada prior to 1930 (SNEP 1996) and led to direct mechanical action of hooves on the stream bed and banks as well as compaction of soil in the uplands, reduced infiltration rates, and increased surface runoff (Trimble and Mendel 1995). In addition to the effects of grazing, timber harvesting played a role in increasing the magnitude of the hydrologic response through increased surface runoff and decreased surface roughness. The other direct cause of channel incision – stream channelization – was also common across the region. Some channelization projects were intentionally constructed to drain wet meadows to allow for railways, roads, homes, and agriculture; other projects related to railway/road construction or crossings inadvertently led to channel degradation and wet meadow drainage (SNEP 1996, Ffolliott et al. 2004).

Consequence: Meadow Drying: When the stream bed incises, the stream stage and water table in the interconnected aquifer also decline, causing the near-surface soil water regime to become drier in the meadow (Figure 2). However this process does not occur uniformly across the valley. The slope of the water table increases as a consequence of incision and continued groundwater inputs to the valley from the hillslope. This results in more xeric (very dry) vegetation near the channel where the water table depth is greater as compared with near the hillslope where more mesic (moderate amount of moisture) vegetation is present (Figure 3).

Consequence: Entrenched Channel: In addition to drying of the meadow, another result of the channel incision process is an entrenched channel that no longer is actively connected to its floodplain. This results in an increase in stream power leading to more erosion of the bed and bank and higher sediment yields. Peak flows also increase as a consequence of an entrenched channel as higher flows can no longer be attenuated by spilling out onto a wide floodplain with high surface roughness and capacity for floodwater storage. This can lead to greater risks of flooding downstream.

Importance of Riparian Zones: Wet meadows are examples of riparian zones, which are areas transitional between aquatic and terrestrial ecosystems and strongly influenced by water (Naiman et al. 2005). They are among the most productive and diverse ecosystems on the planet and provide many societal benefits such as biodiversity support, water quality improvement, carbon sequestration, and flood peak attenuation (Tockner and Stanford 2002). However, through both direct (e.g. channelization) and indirect (e.g. watershed land-use change) impacts, riparian zones have been severely impacted by human activities (Thoms 2003). Restoration of these ecosystems in order to regain some of the benefits these ecosystems provide has been gaining in popularity over the last several decades (Bernhardt et al. 2005). In the Sierra Nevada region, a restoration technique called "pond-and-plug" has been used to help restore wet meadows impacted by incision (Lindquist and Wilcox 2000). The technique includes abandoning the incised channel, redirecting streamflow into a historical or reconstructed channel, filling the abandoned channel with material from excavated ponds on-site, and constructing grade control structures to prevent future incision (Figure 2).

Predicting Restoration Response: Despite the growing popularity of riparian restoration projects like "pond-and-plug", the ability to predict the ecosystem response to such activities is still largely lacking in restoration practice. However, in wet meadows where groundwater is the primary control over the distribution of plant communities, groundwater flow models can be used to predict this spatial distribution of vegetation. Such a model was constructed for a meadow along Last Chance Creek (Loheide and Gorelick 2007) (Figure 1). The groundwater flow model was coupled to a vegetation model that consisted of a relationship between the groundwater regime and the predicted plant community, which is expressed as a vegetation index ('1' = mesic, wet meadow vegetation, '0' = xeric vegetation, and values in-between are mixtures of the two community types). Results show how the vegetation becomes more xeric with increasing streambed degradation and the positive response of more mesic vegetation following restoration (Loheide and Gorelick 2007) (Figure 4). Simulation of the degraded conditions also provided a mechanism for the unexpected patterning of vegetation in the meadow; more xeric vegetation is actually expected closer to the incised stream due to the greater water table depth (Figure 3). Such a model that takes into account changes in geomorphology, hydrology, and ecology can provide a strong aid for managing these important ecosystems in the future.

« How is Everglades geomorphology like that of arid Australian rivers and boreal bogs?       Human-Induced Floodplain Sedimentation in the Driftless Area of southwestern Wisconsin: Consequences on Riparian Ecosystems »