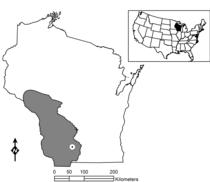 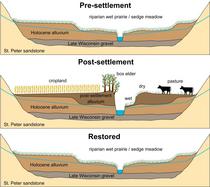 Hide
Figure 2. Conceptual diagram of floodplain change in the Driftless Area from pre-settlement (before 1830), post-settlement (today), and following restoration of the pre-settlement land surface topography (from Booth and Loheide, 2010). Details

Hide
Figure 4. Conceptual diagram showing that removal of post-settlement alluvium (i.e. restoration) – indicated by the gray arrows – leads to more wetland-dependent species in areas where the silt-clay confining layer is absent (left side) and slightly less wetland- dependent species where the layer is present (right side) (from Booth and Loheide, 2012). The vertical scale represents moisture and plant status with “wet” on top and “dry” on bottom. Details

The Driftless Area of southwestern Wisconsin (Figure 1) is a unique region in the Upper Midwest, USA, because it escaped the direct effects of continental glaciation. In contrast, surrounding areas have been glaciated and drift (material of glacial origin) is present. Over the entire Pleistocene epoch, fluvial erosion has dominated the evolution of the Driftless Area landscape. As a consequence, the topography of this region is dominated by a mature drainage network – deep valleys incised into nearly flat-lying dolomites and sandstones – with steep hillslopes and broad uplands (Heyl, 1959). While direct effects of glaciation such as valley burial and flattening of the topography were avoided, indirect effects included mass wasting of hillslopes during harsh periglacial (near glacial) conditions (Mason and Knox, 1997) and extensive deposition of a blanket of loess (wind-blown silt) from the floodplains of nearby glacial meltwater streams (Jacobs et al. 1997). The mass wasting of the hillslopes resulted in a poorly-sorted deposit of gravel in the valleys. Streams throughout the Holocene migrated laterally on top of this armored gravel deposit and left behind fine-grained alluvium in the form of lateral and vertical accretion deposits (Figure 2). The source of this alluvium was mostly the loess that blanketed the landscape in fine silt.

The combination of increased erosion from cropland, pasture, and gullies and increased surface runoff resulted in substantial sediment delivery to streams and valleys throughout the region during flood events. The sediment supply increased more than stream transport capacity and as a consequence a majority of this sediment is now stored within a given local drainage system mostly in floodplains as overbank deposition (Knox 2006). This deposit is referred to as post-settlement alluvium and can exceed several meters in thickness in some larger tributary valleys. It has been estimated that over 75% of the post-settlement alluvium is still stored within many of the small tributary watersheds of the Driftless Area (Trimble 1999).

Channel and valley morphologies have subsequently changed with this influx of sediment from the uplands (Figure 2). Increased sediment supply and discharge increased stream power and created wider and shallower channels in headwater tributaries (Knox 1977). The widening occurred because most headwater tributary channels with drainage areas greater than 10 km2 were not able to incise into the basal gravel layer and therefore stream power was exerted laterally rather than vertically (Knox 2006). By the turn of the 20th century, floodplain sedimentation had increased bank heights to levels where enhanced shear stresses led to accelerated bank erosion and lateral migration rates. This lateral erosion into the early historical floodplain deposits created a meander belt with a capacity large enough to accommodate large flood events, which converted the early historical floodplain surface into a terrace (Figure 2) (Knox 2006).

Soil conservation practices, implemented beginning in the 1930s, have substantially reduced upland sediment sources (Trimble and Lund 1982) and decreased large flood events (Potter 1991) in regional streams. However, much more sediment moves through tributary channels now than before settlement due to re-mobilization of historical floodplain deposits through lateral erosion and continued upland erosion (primarily from croplands). Other legacy effects of the post-settlement alluvium include reduced attenuation of flood peaks due to the flume-like nature of the channels, burial of pre-settlement riparian wetlands, and subsequent increased depths to the water table.

In response to the loss of these wetlands and their associated benefits (habitat for rare plant and animal species, flood peak reduction, water quality improvement), several local land conservation organizations have undertaken restoration projects that physically remove the post-settlement alluvium and replant the restored surface with native wet prairie-sedge meadow plant species (Booth et al. 2008). Recent field investigation of such a project performed in 2006 along the East Branch Pecatonica River (Figure 1) found that removal of the post-settlement alluvium did increase the extent of wetland-dependent plant species (Figure 3) by making the land surface closer to groundwater (i.e. the water table) and thereby increasing the water available in the plant root zone (Booth and Loheide, 2012). Modeling of the groundwater flow system also confirmed field evidence showing that some areas of the floodplain where the Holocene lateral accretion deposit contained substantial amounts of fine silt and clay actually became drier following restoration. This is due to the concept that groundwater cannot adequately flow upwards through this relatively impermeable confining layer to create moist surface conditions even though the land surface has been lowered (i.e. closer to groundwater). In fact, these areas became drier because the amount of storage available for infiltrating rainfall had been reduced due to the post-settlement alluvium removal. Less water storage results in drier conditions as evapotranspiration removes water from this smaller storage reservoir. Due to this differential response to restoration from the presence/absence of the confining layer, the restored floodplain contains a more diverse set of plant community types than before restoration (Figure 4). The changes in this floodplain system represent a complex interaction between geomorphology, hydrology, and ecology.

« The Drying of Sierra Nevada Wet Meadows Impacted by Channel Incision and Opportunities for Restoration       Are pancakes really so flat? LiDAR and the recognition of subtle geomorphology »