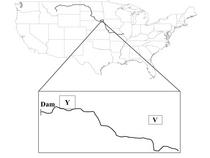 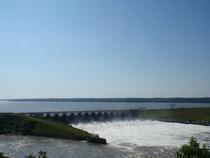 Hide
Figure 2. Gavins Point Dam releasing water at full capacity in response to the 500-year recurrence probability flood that occurred in the study area during the summer 2011. Details

Hide
Figure 4. Daily mean discharge for the Missouri River at Yankton, South Dakota is measured in cubic meters per second. The Yankton stream gauge is managed by the USGS. Details

Dams influence fluvial geomorphology by 1) reducing the magnitudes of large flows that normally move sediment onto riparian surfaces, 2) reducing the concentration of sediment transported in flows downstream of the reservoir, and, depending upon operation methods, 3) changing the normally seasonal timing of maximum and minimum flow stages. Dam managers control both the timing and magnitude of flows that pass through the dam. Managers store the surplus water that they do not want to release through the dam in a reservoir. A reservoir functions like a man-made lake or pond. Within the reservoir, sediment that is normally suspended within the water column and carried downstream has time to settle to the bottom. Thus, the concentration of sediment transported downstream decreases and the volume of sediment stored within the reservoir increases over time.

The timing of floods is also important for riparian vegetation establishment. If the floods do not coincide with the seasonal seed release and germination period, then vegetation establishment will not occur. Thus, the magnitude and seasonal timing of flows and the transported fluvial sediments are important for shaping and maintaining the riparian habitat. As dams change flow and sediment transport characteristics of a river, the riparian habitat also changes. This case study investigates vegetation changes within the riparian zone of the Missouri River downstream of Gavins Point Dam in South Dakota (figure 1 and 2).

Along the Missouri River downstream of Gavins Point Dam in South Dakota, the native riparian habitat is characterized by mixed willow and cottonwood stands and is becoming primarily cottonwood as the forest ages. The cottonwood stands that establish along the Missouri River support vibrant and diverse ecosystems, including the once-endangered bald eagle. Riparian cottonwood trees prefer open bar riparian habitats for establishment and require moist soils in the late spring for germination with a water table that recedes at approximately the same rate that the seedling roots elongate. Historically, floods cleared establishment surfaces along the floodplain (the land surface adjacent to the river channel) during the spring and early summer and sufficiently wet the alluvial sediments for successful cottonwood and willow germination and establishment.

Beginning in the 1930s and 1940s, the U.S. Army Corps of Engineers built six large dams along the upper reach of the Missouri River. The final two dams, Fort Randall Dam and Gavins Point Dam, are primarily responsible for altering the flow magnitude and timing in the study area (figure 3 and 4). The dams along the Missouri River also reduce sediment transport downstream of each dam. As a result, the floods that previously formed new establishment surfaces and wet the alluvial sediments for cottonwood germination rarely occur. Moreover, the altered sediment transport has resulted in channel bed lowering downstream of each dam as the river system establishes a new equilibrium. As the riverbed lowers, the water table drops and soil moisture decreases in the riparian zone. The fluvial geomorphic response of the Missouri River to damming has greatly reduced cottonwood regeneration along the riparian zone.

The loss of cottonwoods opens up habitat for a new species to move in. Recently, red cedar has been establishing along the riparian zone of the Missouri River study area. In comparison to cottonwoods, red cedar prefers drier soils and sediments and does not survive well is frequently flooded areas. Since the dams decreased flooding and soil moisture within the study area, red cedar easily invades the riparian zone.

Between 2011 and 2012, an analysis of the red cedar age structure shows that nearly all of the red cedar trees established after the dam was built. In addition, approximately 50% of red cedars in the study area are young trees or saplings. This indicates that the dams created environmental conditions that permit red cedar establishment.

To assess the patterns of invasion along the riparian zone, a linear regression model was created to show the influence of soil type and cottonwood density on red cedar frequency. The model indicates that as the percent sand in soil increases, red cedar density increases. Thus, fluvial geomorphic surface, represented by soil type, can be used to predict location of red cedar invasion. In addition, the model shows that cottonwood density is inversely correlated with red cedar density. This indicated that red cedar likely invades thinner and older cottonwood stands.

Overall, this case study reinforces the connection between riparian ecosystems and fluvial geomorphology. As humans alter fluvial geomorphology through activities such as dam construction, new riparian environments will be created. As new vegetation and animals invade the new environments, the native ecosystems will shrink or disappear. As a result, many of the ecosystem services societies benefit from will change.