Erodibility, tensile strength, and the "k" problem in Grand kanyon 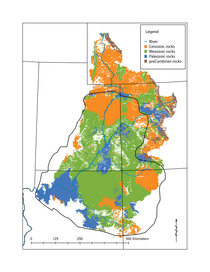 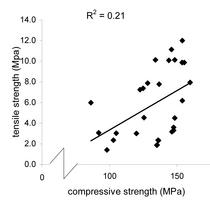 River profile shape is an important indicator of the geomorphic processes and history that contributed to its modern form. In the case of bedrock streams during episodes of incision, resistance of river-level bedrock controls the form, processes, and rates of river incision (Sklar & Dietrich 2001). A significant base level fall signal incises quickly through weak rock units and becomes hung up on harder rocks as it migrates upstream, creating knickzones (areas with a sharp change in channel slope) in more resistant units.

The study of river morphology has been a valuable tool in the interpretation of the scale, magnitude and timing of rock uplift, and the stream-power model of river incision has become the foundation for modeling bedrock erosion (e.g. Howard and Kerby 1983; Whipple and Tucker 1999). The stream power erosion model is based on the relation:

Where incision rate (E) is a function of slope (S) and river discharge (Q). The constant k represents erosivity and m and n are constants that are determined based on the hypothesized control on incision rate (Finnegan et al. 2005; Whipple & Tucker 1999).

According to Burbank and Anderson (2012), the tectonic-geomorphic community faces a challenge of acknowledging and addressing the role of rock type in governing the pace of erosion and topography. It is important to determine which rock properties matter for erosion susceptibility; this is referred to as the "k-problem." Studies typically estimate, rather than measure, a k or set of k values that reflect the pattern found in nature (Stock & Montgomery 1999; Whipple & Tucker 1999; Pelletier 2010).

Numerical modeling based on measurable parameters and processes acting on bedrock channels has been used to research landscape evolution and stream long profiles increasingly in recent decades. The Colorado Plateau is one classic example of a landscape that geomorphologists hope to explain the history of by using numerical models. The evolution of the Colorado Plateau landscape has been debated since the first explorers braved Grand Canyon's rapids. In particular, there is longstanding disagreement over the amount and source(s) of uplift for this high elevation terrain (Lucchitta 1972; Pederson et al. 2002; Flowers 2010; Levander et al. 2011; Karlstrom et al. 2012). There has also been disagreement about the timing and rate of erosion that caused the landscape's dramatic incision (Pederson et al. 2002; Polyak 2008; Cook 2009; Wernicke 2011; Darling et al. 2012).

The integration of the Colorado River across the western Colorado Plateau 6 million years ago resulted in an approximately 1500-meter base level fall (Lucchitta et al 1972; Pederson et al. 2002). This big pulse of incision triggered a transient knickpoint that has migrated upstream from the Grand Wash Cliffs ever since. Upstream erosion has been far from uniform, as an examination of the highly uneven long profile across the Colorado Plateau reveals (Fig. 1; Pederson & Tressler 2012). The Colorado-Green drainage has a broadly convex longitudinal profile with four prominent knickzones shown in figure 1.

Understanding the processes responsible for this irregular form and uneven distribution of unit stream power (Fig. 1) will shed light on the uplift-erosion debate. Some researchers' data indicate that bedrock (Fig. 2) may be a primary controlling factor on not only the long profile (Fig. 1), but also gradient and width (Pederson & Tressler 2012). Pederson and Tressler (2012) found that rocks with higher strength correspond spatially to knickzones and reaches with high unit stream power while reaches with low unit stream power consistently occurred where rocks have low strength values.

Correlation between stream power and high rock strength would suggest that reach-scale gradient of the Colorado and Green rivers is adjusted to maintain a balance between driving and resisting forces of erosion. Results from previous studies at Utah State University (Pederson & Tressler 2012) indicate that rock strength and topographic metrics are strongly correlated in the middle-lower reaches of the plateau and that channel steepness and width are strongly linked to rock type.

The effect of bedrock properties and the interplay of uplift and erosion must be considered to understand the patterns of topography and process in this landscape. To do so, a methodology problem must be addressed. Traditional rock-strength measures such as Schmidt hammer rebound, Selby rock-mass strength (RMS), or tensile strength ignore weak rock types, potentially excluding the dominant lithologies of some reaches.

Incision into bedrock by stream erosion occurs by plucking, abrasion, cavitation and solution. The efficacy of each of these processes is strongly dependent on the bedrock lithology (Whipple et al. 2000). In the arid Colorado Plateau there are many regions underlain by weak rock formations such as shale that should be very easily eroded by mechanical processes, yet they cannot be sampled coherently for lab analyses or tested in the field with a Schmidt hammer.

Compressive strength is quantified using a Schmidt (rebound) hammer in the field. Most rock strength work has been based on this method (e.g. Pederson et al. 2002). Although rocks break in tension, especially due to plucking during erosion of bedrock streams (Whipple et al. 2000), it has long been assumed that compressive strength is a suitable analog for tensile strength. This assumption may not hold true (Fig. 3; Sklar & Dietrich 2001). The rock must be free enough of nearby joints and bedding to get a good reading. Consequently no mud rocks can be tested this way because they are too thinly bedded. In addition, the values determined for coherent rock units may be misleadingly high depending on how much of that formation the tested portion represents.

Tensile strength is determined by the Brazilian splitting test in the lab. This test is an indirect measure of tensile strength by reading the load (p in N) required to induce failure of a rock disk by a uniaxial stress (Vutukuri et al. 1974). In much the same way as the Schmidt hammer is unable to assess weak mudrocks, the Brazilian split test is even more limited to rocks that are coherent enough to be transported back to the lab, cored, and made into discs. Although Sklar and Dietrich (2001) have shown this measure to be more representative of k, it further complicates data collection.

Many researchers simply use Schmidt hammer measurements for establishing erodibility with respect to fluvial systems, typically ignoring fracturing and any rocks that are too weak to measure directly (Schmidt & Montgomery 1995; Sklar & Dietrich 2001; Cook et al. 2009; Pelletier 2010). The strength of these studies and models can be greatly enhanced with actual data rather than approximations for k (Whipple & Tucker 1999).