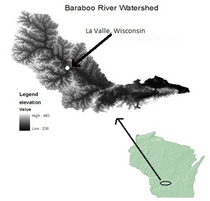 Hide
Figure 1. Location of La Valle, WI within the Baraboo River watershed. Study area extends three kilometers upstream and downstream of the La Valle Dam. The La Valle dam is located in the center of the town and approximated by the white dot. Legend elevation is in meters. Details

Hide
Figure 2. The dam is approximately 3m high. Structure was removed in stages during the years 2000 and 2001. Photo is taken downstream of dam, looking upstream. Details 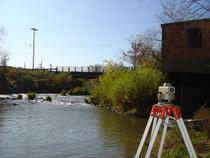 Hide
Figure 3. The location of the La Valle Dam, which is now removed in this photo. Photo is taken downstream of dam, looking upstream. Note the wide cross-section that still exists downstream. Details

Hide
Figure 4. Longitudinal channel profiles for the study area before dam removal occurred (labeled “dam” in the legend) and approximately one decade after dam removal (labeled “riffle structure” in the legend). The large peak that occurs near the 6000m channel distance is the grade control structure. Details

During Euro-American settlement throughout the United States, settlers built milldams along streams to harness energy. Often, the construction of a milldam improved the economic future of the community. These dams provided power for saw mills, grist mills, and paper mills. However, most milldams have a design life of approximately 50 years. Over time, the dams deteriorated and technology advanced so that the lumber and agricultural industries no longer depended on the milldams to power their mills. As a result, the cost to repair structurally degraded dams often outweighs the economic benefits, so managers are opting for dam removal.

Despite the widespread removal of small dams across the U.S., there is a paucity of studies that focus on the long-term hydraulic and geomorphic responses of stream channels to dam removal. Because most dam removals have occurred only recently, most studies tend to focus on the first year or two after the removal and end before channel reconstruction and restoration are completed. Yet many theoretical models on dam removal suggest that stream sediment budgets, ecological communities, and biogeochemical cycles may take decades to return to a quasi-equilibrium.

Dams and their removal cause profound changes in channel form and function. A reservoir forms upstream of a dam, where water depth and sediment storage increase. In other words, the reservoir is like a lake; thus, a dam changes the upstream stream reach into a lake. As sediment accretes within the reservoir, the reach downstream of the dam degrades through the erosion of the bed and bank materials in attempt to re-establish the sediment load. The changes in fluvial geomorphology and hydrology cause a rippling effect through other physical environmental variables, influencing stream ecology and biogeochemical cycling.

Following dam removal, the downstream reach receives a large sediment pulse as the stream channel incises through the reservoir sediments. The remobilized sediments are often re-deposited along the channel bed downstream of the dam site. Particular ecological and geomorphic responses to dam removal vary based on: 1) the size, rate, and timing of the sediment pulse from upstream, 2) stream geomorphology (i.e., gravel vs. silt and clay fluvial sediments; or meandering vs. braided channel form), 3) stream hydrology with particular attention to flood frequency, 4) dam removal method, and 5) post-dam removal channel restorations.

The La Valle Dam is located along the Baraboo River in southwest Wisconsin (figure 1). The La Valle Dam was removed in stages between 2000-2001 (figure 2 and 3). During the dam removal process, a three-meter tall grade control structure was built at the dam site. The grade control structure was installed to provide enough power to the mill to turn the turbines. While the mill was no longer actively used, the mill owners wanted to keep the turbines moving for demonstration purposes for visitors.

A follow-up study of the La Valle Dam removal, between 2009-2011, shows that the stream has not reached quasi-equilibrium (figure 4). A 500-year recurrence probability flood occurred in the study area during June 2008. Modeling and field analysis indicate sediment erosion from the reservoir reach occurred during the June 2008 flood pulse. However, sediment has been accreting behind the dam site since the June 2008 flood. Hydraulic models of the stream channel indicate the grade control structure decreases water velocity and shear stress immediately upstream of the structure. Thus, the grade control structure likely decreases sediment transport capacity of the reach immediately upstream of the structure. This indicates that the grade control structure acts similar to a dam.

This study underscores the importance of documenting the long-term stream channel response to dam removal. Improved technologies and mapping capabilities, such as LIDAR, repeat aerial photography, and mapping software, along with the growing number of initial dam removal studies, enhance our ability to study stream response on the decadal scale. The La Valle Dam removal case study illustrates that channel restoration procedure can significantly influence channel response to dam removal. Moreover, this case study demonstrates the influence an extreme hydrologic event may have in mobilizing sediment in restored streams after dam removal. In terms of the La Valle Dam removal, each extreme flood may result in renewed incision of sediments within the former reservoir reach, followed by short-term downstream channel bed aggradation. Thus, due to the post-dam removal channel restoration procedure, large floods may simulate small dam removals in terms of former reservoir sediment mobilization and subsequent physical and ecological stream responses.