Figure 1. This context figure shows where the Chinese stations are and how much data are available for each one. Details

Hide
Figure 2. (a) This sediment rating curve shows one year of data for a single station. The hysteresis in the plot and the variability in sediment concentrations for a given discharge show that the data are collected daily. Hysteresis is when the sediment carried by the river for a given discharge is different when discharge is rising than when it is falling. This happens because as water levels are rising the river first has to mobilize big stuff on the bottom of the river in order to get to the smaller stuff. Once the big stuff is mobilized, the smaller grains are easier to pick up. The river then carries more sediment as the water level falls because the river already has all the smaller grains in suspension. (b)The locations of each station are not given exactly, so we had to make a best guess based on river names and upstream areas. Given the close correlation between the reported and calculated upstream area, we think we did a pretty good job with guessing locations. Details 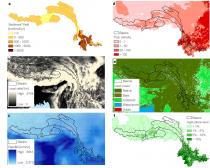 Hide
Figure 3. This figure shows a variety of parameters that we tested for correlation with sediment yield. (a) Average annual sediment yield; (b) mean local relief (mean local relief is the average difference between the highest and lowest point within a 10 km radius for every point in the watershed); (c) average annual rainfall; (d) population density; (e) land cover; (f) fraction agricultural land from Chinese statistical yearbooks. Details

Hide
Figure 4. This figure shows sediment yield as a function of each of the parameters shown in Figure 3 as well as total upstream area. Details

We generally know that logging, and clear-cutting in particular, can cause enormous amounts of erosion due to loss of soil cohesion. So, one would predict that since most of the forests in western China were clear-cut in modern time, there should be a huge increase in erosion of soil from the hillslopes and sediment delivery to rivers (e.g., Yin and Li, 2001). Although most places in the world only monitor sediment concentration in rivers a few times a year and extrapolate the concentration for other days based on a sediment rating curve, the Chinese government has a large network of stations throughout the country that measure sediment concentrations and water discharge daily. So it turns out to be fairly easy to test the hypothesis that massive deforestation after the Communist government took power, called the Three Great Cuttings (the Great Leap Forward in the 1950s, the Grain as a Key Link policy in the 1970s, and Opening and Development in the 1980s), should show up in the sediment record for rivers in western China.

Taking advantage of this enormous and unique dataset, we calculated erosion rates for western China for the entire period of record of each of the gauging stations the Chinese set up. We also calculated values of possible parameters that could be related to erosion rates for each watershed, including mean local relief (a surrogate for slope steepness), rainfall, fraction farmland (a surrogate for development), and land cover. For each parameter we plotted the erosion rate for the basin as a function of the parameter value. We found that none of these parameters do a good job explaining the erosion rate patterns we see. Since we expect that some geomorphic or anthropogenic parameter will explain erosion rate patterns, this was rather surprising.

We then took the stations with at least 20 years of daily data and calculated annual erosion rates to see if there are any trends with time. We expected that erosion rates would increase just after each of the Three Great Cuttings. Once again, we saw no systematic trends in the erosion rates over time.

So what did we learn? We found that based on the sediment yield data we have, there seems to be no relationship between logging and sediment yield in western China. There are a few possible explanations for what we find. The first is that the logging didn't cause an increase in erosion. This could be because local people already were doing things, like farming, that caused erosion (e.g., Montgomery, 2007). Logging generally does cause an increase in erosion, at least over short periods of time, so this is not hugely likely. The second possibility is that the sediment just didn't make it to the rivers. If that is the case, then where did the sediment go?

It seems like the best answer, and our current working hypothesis, is that the logging did cause erosion but that the sediment is not making it to the rivers all at the same time. So the sediment produced by the logging is getting stored in floodplains, alluvial fans, and other depositional landforms somewhere between the hillslopes and the big gaged rivers we were using data from. One way to test this would be to use satellite images to map sediment deposits in the valley bottoms. Although this flies somewhat in the face of assumptions about mountainous watersheds not having much sediment storage, it seems like the most reasonable explanation for why there is no systematic increase in sediment yield due to Chinese logging.