A new deglacial chronology of the Laurentide Ice Sheet in Wisconsin 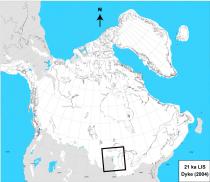 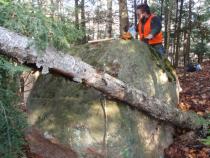 Hide
Figure 2. Example of a glacial erratic boulder sampled for surface exposure dating in Wisconsin. This boulder is fairly well-rounded from its transport in the ice sheet. These erratics can have a composition different from the local bedrock, suggesting that they may have traveled a great distance. Details 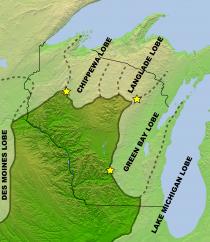 During the past 2.5 million years, the earth has seen a series of major ice sheets built through the slow accumulation of snow, followed by warming and rapid ice collapse. This fluctuation in global ice sheets is primarily driven by changes in the earth's orbit around the sun, altering the amount and seasonal timing of solar energy reaching the earth surface. Records of past greenhouse gases such as CO2, however, also oscillate in step with changes in solar energy. Amounts of solar energy and greenhouse gases both play an important role in the cooling and warming of the planet, thus driving the rise and fall of former ice sheets. But which of these two variables provide the primary mechanism driving initial ice sheet collapse?

The most recent glacial period, termed the Last Glacial Maximum (LGM), occurred roughly 25,000 years ago when global ice sheets were at their greatest extent. The world was a drastically different place. Major ice sheets many kilometers thick covered much of North America and Scandinavia. So much water was locked up in ice on the continents that sea level was more than 120 m lower than today. The largest of these ice sheets was known as the Laurentide Ice Sheet (LIS) (Figure 1). It covered most of Canada and poured over northern portions of United States like fingers of slowly moving pancake batter. These fingers along the southern LIS extent are known as "lobes," and their presence is well marked by the accumulation of glacial sediments across the landscape.

Determining the mechanisms that drive the initial collapse of large ice sheets requires precise dates on when ice began to disappear. At the end of the LGM (about 24,000 years ago), the amount of solar energy reaching the earth's surface in the northern hemisphere began to rise. CO2 and other greenhouse gases, however, did not begin to rise until about 17,000 years ago, as seen from ice core records in Antarctica. Assessing when ice sheets began to retreat relative to these deglacial controls is important in resolving the primary mechanism driving initial retreat.

In recent decades, scientists have developed a new method to directly date ice retreat called surface exposure dating. Quite simply, this method measures the sunburn of rocks. When fresh rock is exposed at the surface, it starts to interact with high-energy radiation from deep in the galaxy, much in the way that our skin is burned by UV light from the sun. This interaction starts to produce rare isotopes in the rock (such as 10Be, 26Al, 3He, and others). By measuring the concentration of these isotopes in the rock's surface, scientists can estimate the age at which the surface was exposed. If the rock was exposed a long time ago it will have a relatively large concentration of these rare isotopes, but if it were exposed more recently, it will have a much smaller concentration. For ice sheet retreat timing, this method samples from boulders called erratics, large hunks of bedrock that were ripped up and carried in the ice as it flowed over the landscape. As ice retreats, these erratics are left behind and exposed for the first time. Surface exposure dating estimates how long ago this uncovering occurred.

The state of Wisconsin has a rich glacial history with defining geomorphology such as prominent moraines, hummocky topography, thick plains of glacial till, and large fields of drumlins. While the glacial features in this region have been extensively mapped and studied, however, the deglacial timing of retreat from ice's maximum extent is poorly known. Surface exposure dates from the terminal moraines in Wisconsin provide an appropriate test of the mechanisms driving the retreat of the Laurentide Ice Sheet at the end of the Last Glacial Maximum.

Surface exposure dates from 13 glacially deposited boulders were collected from at or near the maximum extent of the Chippewa, Langlade, and Green Bay Lobes of the Laurentide Ice Sheet in Wisconsin (Figures 2, 3). Results from the Chippewa and Green Bay Lobes both show initial ice retreat occurring at ~22,000 ± 1,000 years ago. The data from the Langlade Lobe, show a much later retreat at ~18,500 ± 700 years ago. These samples of the Langlade Lobe, however, were collected from a site over 10 km from the final ice extent. Therefore, these dates suggest Langlade Lobe ice began retreating before this time.

Surface exposure dates in Wisconsin imply that the Laurentide Ice Sheet began retreating from the terminal moraines at ~22,000 and/or before 18,500 years ago. This shows that ice started to retreat from the region in advance of the global rise in greenhouse gases at 17,000 years ago, implicating changes in solar energy as the primary trigger for initial ice sheet retreat. Similar surface exposure data from the terminal moraines of the Laurentide Ice Sheet in New England also show ice retreat began from this region before 21,000 years ago, nearly synchronous with the ice retreat in Wisconsin. While this data suggests that changes in solar energy were the initial trigger of ice sheet retreat at the end of the Last Glacial Maximum, the powerful influence of the later rise in greenhouse gases on the climate system further amplified the initial warming and drove later ice decline.